I accepted an invitation to attend tonight's introductory lecture for NCIRE's annual conference on brain health. Gen. George Casey (US Army, Ret.), former Chief of Staff of the US Army, gave his talk after Medal of Honor recipient Paul Bucha introduced him. One of the people on hand told me that every VA hospital that has some affiliation with a university medical school has a non-profit fundraising entity like NCIRE. 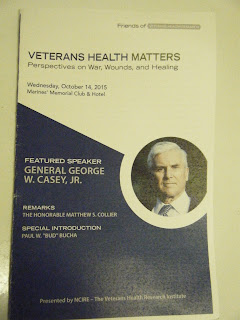 I like what Mr. Bucha said about how integrity builds trust and leads to successful leadership, and that the best leaders are compassionate. It's great that an MOH recipient recognizes things that many military leaders regard as mere lip service rituals. Gen. Casey shared the sobering findings from multiple military health assessments that drove him to change Army practices when he was Chief of the service. The one survey finding I noticed most readily was the disturbing lack of fidelity to ethics among Army people. I learned that firsthand as a lieutenant and captain. Righting wrongs is always the best way to live.

I am fortunate that I do not have PTS from my active duty tour in Iraq. I used to feel some stress when my fellow alumni from the University of Notre Dame and the University of San Francisco told me my military background was worthless. I no longer feel that way because I don't need negative forces cramping my style. Removing bad people from one's life is always the right thing to do.

I can't see a business connection here relevant to Alfidi Capital. Kudos to NCIRE and the VA for inviting private sector partners to participate in their research. The VA's tech transfer program deserves Silicon Valley's interest. I am in no position to fund NCIRE's research, but I'll give them free publicity here on this blog.
Created by Anthony Alfidi at 10/14/2015 10:35:00 PM