API Monetization And Distribution At Integrate 2015

I scored a seat as a panelist at Integrate 2015, so I had to check out other parts of the conference to see what's new in API World. There's more to app ecosystems than hackathons and gamification. Apps need information fed from the remainder of the data supply chain: data warehouses, SDKs, and APIs. 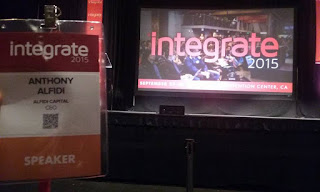 Deep linking into the app ecosystem is the brand new way of getting content to searchers. I think "discovery service" will be an emerging buzzword for content marketers. App distribution has been one-to-many so far, unlike Web searches matching many-to-many. New app store indexing with knowledge graphs and search will bring apps into many-to-many distribution. The deep linking experts on hand at Integrate 2015 claimed that cheap and free discovery drives app downloads, but they had no examples of success. Paid social media promotion still seems to be a key to driving app downloads. Aspiring startups building APIs and apps must still budget for marketing and raise capital with promotional milestones in mind.

One speaker shared some pretty good insights on the API value chain. Adding details after basic data implies adding value. The API and app have different price points, so the "spread" between them is the added value. The speaker identified different business models based on who pays for distribution. Each model had several different permutations of pricing structures. The cool thing about the broader distribution models is that they allowed for multiple price points. Developers can get paid with affiliate revenue sharing, like the way Uber's API gets revenue when partners in travel and tourism use it to make their own apps. Subscription-based fees for units or tokens tracking API calls resemble the pricing plans we recognize in our smartphone data plans. The acceptance of subscription plans for API calls comes when API providers have large numbers of APIs addressing many segments. The biggest revelation for me was the high cost of hosting APIs in the cloud if they generate high data transaction rates. Hybrid cloud solutions may be best for Big Data providers, with high-volume transactions hosted on premise and other less intense data hosted in the cloud.

The developer experience (DX) is another term that belongs with UX and UI. Cool incentive promotions can generate developer buzz. Displaying an API with pleasing aesthetics means app developers will find it attractive and give it social proof. One piece of conventional wisdom floating around Integrate 2015 is that it's okay to raise prices until some portion of your customers complain, provided you understand your API's sales cycle. I think raising prices until 20% of your customers complain validates the Pareto principle. The other 80% won't notice the price increase because the API relationship isn't significant enough to them.

Proprietary API certification means little if it does not reference some independent computer sector standard. Do a Google search of "API certification" and see the links related to petroleum engineering, not coding. The data sector covering SDKs, APIs, and apps is still so young that it does not have a standards body. The elegant solution would be OASIS standards for API call testing, installation, configuration, documentation, escalation processes, and versioning triggers for re-certification.

API developers must find distribution channels. One successful developer insisted on using a universally accepted protocol. I suppose JSON fits the bill because a lot of developers at Integrate 2015 were enthusiastic about it. Partner networks matter, and so does saying "no" to the wrong partners who want distribution for the wrong business reasons.

I'll conclude with a brief overview of my own participation on one of the panels. I shared the stage with Nicole Bryan from Tasktop and Salil Deshpande from Bain Capital Ventures to discuss venture capitalists' perspectives on investing in API-centric startups. We explored the relationship between monetization and distribution, some changes in the economic landscape that make APIs viable as a core business model, the stories an API startup can tell to make outsiders care, and some standout aspects of an API business model that we would notice in a format like Integrate's startup challenge. The audience of developers and tech aficionados needed to hear the back-and-forth of both genders on a panel representing tech practitioners, venture investors, and the analyst community. I thought our panel was more well-attended than a couple of the main stage headliner talks. Our audience asked sharp questions relevant to launching an API startup. This is the kind of high-level attention developers can get when they attend conferences like Integrate 2015.
Created by Anthony Alfidi at 10/03/2015 10:36:00 PM