Peeking Inside BoxWorks 2015 For Cloud Wisdom

I had to peek inside BoxWorks 2015 in San Francisco this week for more than my share of free food and drinks. Box continues to shake up the enterprise file management product universe. People are groping beyond the clunky offerings in typical word processing and spreadsheet action. Box is here to migrate those legacy cubicle habits to the cloud, where Dilbert and crew can collaborate online while the pointy-haired boss watches. 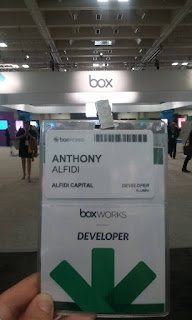 The Developer pass is a legacy of my attendance last year when they announced a blanket special deal for prospective attendees. I still think Box should give me an Analyst pass instead because I don't code for a living. I have to convince these people that I know how to write. There was a lot of space available in Moscone North between the small number of large partners who ponied up for booths. 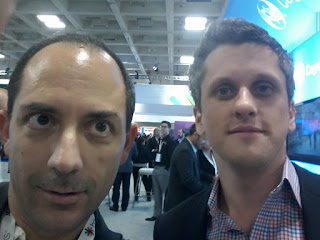 Aaron Levie, CEO and Cofounder of Box, was kind enough to pose for a photo with me. He is the star of this show. Someday I will learn to take a proper selfie by looking at the tiny camera lens instead of the shutter button. The company's C-suite honchos were really keen to wander the trade show floor and meet the little folks like me.

Tim Cook took an hour out of his busy schedule running Apple to chat with Aaron in the first keynote. A show of hands in the audience revealed huge iOS use. I was impressed. Cutting-edge techies still love Apple. Tim acknowledged Apple's early buildouts of enterprise software features and looked forward to something beyond today's early stage of enterprise mobility. If mobile is really forcing radical rethinking, maybe Apple could go ahead with the launch of self-driving cars that so many people in Silicon Valley are wishing for the company. Aaron didn't ask Tim about potential Apple cars so we all still have to wonder. The audience laughed when Tim implied iOS was a better product than Android. You just have to love spontaneity in techies. Writing iOS apps requires Mac hardware, so app adoption drives Apple device sales. That's a nice touch. I hope analysts pick up on that synergy instead of wishing for Apple automobiles.

I like the quiet genius Tim exhibits. His stage presence is reserved but he clearly commands respect without being emotionally expansive like Marc Benioff. Tim smiled when Aaron suggested Apple price all of its hardware upgrades into subscription services. The audience gave me the impression they would welcome such a move. Here's validation for a contention I've heard among some Valley people that subscription services will drive future recurring revenue models. Tim threw a few bones to the do-gooders in the tech community by mentioning Apple's work for society's betterment. Being on the right side of environmentally benign energy and human equality matters to the talent pool circulating through the Bay Area's biggest companies.

The big Box product update keynote was all about cheerleading. Every company needs to hear its top people evangelizing the public about their great products. Uncle Sam will thank Aaron for mentioning FedRAMP compliance. The product demos showing Box integration with Microsoft Office were cool. Microsoft is obviously repositioning Office as SaaS. No one can stay out of the cloud any longer. Push a button on the menu bar and your Excel spreadsheet becomes part of a shareable workflow in Box.

I really liked the VC panel's perspectives on innovation. I always follow the money. Whenever I wonder why VC firms never hired me, I remind myself that my military background must have made them think I was illiterate or homeless. Venture partners love their work. I would love it if they would pay me to do something. One panelist had a lot to say about an alleged gap between public and private market valuations for companies. He thought the public market is more efficient at price discovery and offered employees more liquidity options, while the private market only allows a "marginal buyer" (I assume the next round's venture investor) to determine exit valuations. I agree with the panel that leading private companies are probably overvalued, and their lesser-known competitors are undervalued. No one mentioned unicorns but I think that's what they meant.

I'm just going to keep on rolling with the VCs' lessons because they were all pretty sharp. My recollection of the overcapitalization discussion is that startups who raise too much money can raise employees' expectations too early. Early hopes get dashed before the startup's financial success can justify high compensation. I also think early employees in VC-backed companies get spoiled by gourmet food and game rooms thanks to overcapitalization. Finding huge scalable solutions is still a hard part of a VC's job. I hate to think these VCs make it harder on themselves by giving too much money to startups that have yet to scale.

It's cool that these VCs still think their job includes helping startups recruit employees, making introductions to customers, and being a CEO's sounding board. That's what I would do if I ran a venture fund. I have done similar things free of charge for startups I mentor, and it has never benefited my career or wallet. I guess having a VC pedigree really matters when it's time for venture advice to pay off. I knew what the VCs meant when they discussed portfolio construction in a high-risk macro environment. Everyone sitting on serious money is wondering how hard and fast the next recession will hit after years of Federal Reserve monetary stimulus. Any VC with a portfolio exposed to social media or cloud storage is going to get smacked in a downturn. Recessions always hit advertising budgets and IT capex budgets hard, so there will be lots of pain in social media and cloud storage. I still hold to my conspiracy theory that VCs force their losing portfolio companies to pivot to other parts of the cloud sector they think they understand. I have held this theory at least since GMIC's 2014 conference. Ironically, GMIC was holding its annual conference at the same time as BoxWorks. I had to align my week carefully, and BoxWorks won over GMIC because I knew I'd get free food.

The security panel was a blast. Aaron Levie convened several CISOs to give the subject a level of attention it has long deserved. State-trained security specialists can moonlight as freelance hackers for hire. The CISOs know their threats better than app developers. I have long marveled at app developers' preference for performance over security. Developers need to pick up the new buzz terms for behavioral detection, high-risk workflows, and single sign-on the CISOs shared on the panel.

Each cloud stack layer presents different security challenges. The CISOs noted that API activity generates data for behavioral analysis. The good news is that containerizing data can block some attacks. The bad news is that large-scale data migration opens attack vulnerabilities. One panelist had an awesome quote: "Move from a governance and audit model to a risk-based model" for security, once you assess critical assets first. I am totally with the panelists on the importance of partnering with law enforcement. Enterprises should collect the forensic data on attacks, but leave prosecution and retaliation to the US government.

I need to share some more of my own thinking after the security panel. Here's your access to my genius. I would like to see a UN convention on data privacy standards that would force governments to acknowledge cyber security norms. The nations that don't sign up become obvious rogues. Tolerance for data piracy in violation of international agreements will drive foreign direct investment away from those renegade nations. I noticed that none of the panelists discussed formal risk assessment guidelines. I have long believed that enterprise risk managers should build 2x2 matrices for the probability and severity of attacks. CISOs should build such a matrix for each layer of the cloud stack and plot incidents in the matrix that could impact their most critical assets. Assigning a dollar value to each incident's damage will drive priorities for security budgeting. The matrix will be different for every firm and even every industry, because enterprises have different cyber exposures based on their data use and network geometry. I've got this all figured out. I would make a great CISO but I'm really busy being a CEO here. 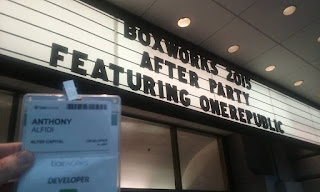 I was on the fence about going to the conference's after-party at the Bill Graham Civic Auditorium. I made the right call by attending. Indeed, free food and booze was there after all. These analyst gigs are great. OneRepublic rocked the hall with hits that we all remember from the past couple of years. I chowed down on hot dogs, corn dogs, and a salty pretzel that absorbed my booze. The pinot noir was really nice. 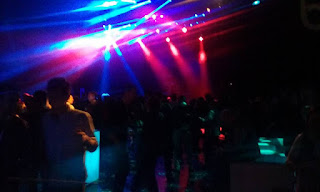 The DJ took over after OneRepublic signed off for the night. The photo above is what a hip-hop / house dance party looks like, for the benefit of those of you who do not attend top-notch corporate events in San Francisco. Software developers were going nuts on the dance floor. The small number of very athletic people on the dance floor competed with a large number of uncoordinated people. I made my way to the bar without getting kicked in the face. One gal convinced me to join her on the dance floor but I did not have the coordination to do much besides wander around. Lots of otherwise introverted people were bumping and grinding towards the end of the night. I am neither a bumper nor a grinder.

BoxWorks is living up to the reputation and expectations of one of its investors, namely Salesforce. Cloud computing cultivates a hip culture to attract young programmers. The flower of youth is the right demographic for all-night coding marathons. We interrupt this coding marathon for a flash mob dance party with booze in the middle of the week. Even dedicated nerds need an intermittent reward pattern. I am one nerd who needs to be at conferences like BoxWorks.
Created by Anthony Alfidi at 10/01/2015 10:43:00 PM