The French Ameri-Can Climate Talks (FACTS) roadshow came to San Francisco last night. I attended at the Exploratorium to hear from luminaries, as I usually do when intellectual heavyweights are around. The French government promotes the FACTS series as a precursor to the UN COP 21 / CMP 11 conference in Paris this December. I will render my impressions of the speakers' insights with my own genius thrown in to make it worthwhile. 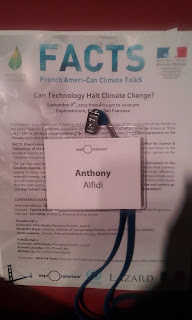 The UN Environment Program (UNEP) quantifies the gap between annual goals for carbon reduction and actual carbon generation. The UN 2030 Agenda for Sustainable Development supersedes the UN Millennium Development Goals (MDGs) because development without sustainability still exacerbates climate change. NOAA data shows the world's surface temperatures rising. Complaining about methodologies does not change the data. UNEP quantifies each country's climate change as Intended Nationally Determined Contributions (INDCs). The implied take-away is that some nations, presumably the heavy polluters like China, will have disproportionately larger INDCs. UNEP's Green Economy Initiative redefines prosperity to include human and ecological factors. The initiative would be more marketable to the finance sector if it used the language of ESG criteria and triple-bottom line outcomes that investment managers now widely accept.

President Nixon's Project Independence was an early attempt to put the US energy sector on a sustainable path. It failed because it focused more on supply changes than demand management. One of the FACTS speakers noted that decarbonizing the US economy now works because demand-side energy efficiency is ten times more effective in reducing carbon output than the expansion of renewable energy supply. Energy used per unit of GDP and carbon generated per unit of energy can still decline while GDP continues to grow. The central lesson of sustainability is that the developing world need not trade away future prosperity to save the planet. 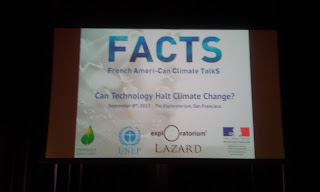 Regulating energy markets and human behavior ideally generates Nash equilibriums, but some actors will always resist these equilibriums by seeking self-maximizing outcomes. The paradox is that individuals' optimizations do not optimize an entire system. The global regulatory regime that COP 21 / CMP 11 embodies should move many national economies toward Nash equilibriums. The US EPA Clean Power Plan recognizes that decarbonization is the only politically possible solution the developed world can offer the developing world.

I like the Lazard investment banker's joke that energy companies should put their receivables into special purpose vehicles (SPVs) and sell them as unit trusts to investors. The good thing about carbon trading is that energy companies won't have to use SPVs to monetize their gains from efficient demand or renewable supply. Investment banks can have their fun packaging solar and wind assets into yield cos at a high scale while microfinance enables smaller off-grid solutions at a low scale. Lazard does great work publishing annual summaries of the levelized cost of energy (LCOE) for each major renewable energy technology. The DOE NREL's LCOE calculator is agnostic towards any one technology. I say utilities should use NREL's calculator first to determine what commitment their capital budget and credit quality will allow, then use something like Lazard's numbers to determine which tech is most affordable.

Two hot French babes chatted me up at the reception afterwards. I kept them entertained by demonstrating my amazing intellect and they were suitably impressed. A whole bunch of hot French babes attended this lecture. There must be something in the water over there in France that makes women so much hotter than the ones growing up in other regions. The FACTS talk got me interested in hearing more about financing the UN's sustainable goals even if there are no babes on hand to admire my interpretations.
Created by Anthony Alfidi at 9/09/2015 09:26:00 PM