Fashion Community Week San Francisco held its conference and trade show today. I had to drop in to see what was going on in this sector. I haven't touched fashion since I attended iFabbo's 2013 social media conference so this was a refresher course. I am of course quite fashionable myself, when I bother to leave home once in a while. 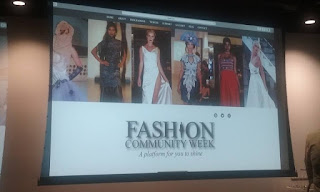 The regular icons from the local fashion and tech scene were on hand to share stories of how they integrate. I knew about Fashion Incubator SF but I had not heard of PeopleWearSF until today. Fashion startups graduating from the incubator can build their partner ecosystem through PeopleWearSF. I like one of the quotes from one of the early speakers at this conference: "Don't make decisions from where you are. Make decisions from where you want to be." I have not seen that quote in a Google search so it must be original. I guess it descends from well-known quotes about how founders should imagine themselves as billionaires cornering a market instead of as impoverished bootstrappers. Clothing designers building their brands should begin with the end in mind.

I had not checked into Lifograph or Greenlight VR until I saw them on the sponsor list for this conference. Maybe I heard about them in the past but completely forgot them in the course of my high-powered, fast-paced, fashionable lifestyle. Graphical data representation matters to hard-core nerds and the nascent virtual reality sector is one force pushing it.

The founders of Fashion Xchange Magazine have a rare focus on the business of fashion, unlike the more familiar magazines that just display clothes and makeup. I'll paraphrase their classic lessons: Build a complimentary team. Don't be afraid to be different. Put 110% into your vision. Passion and obsession intersect in success. 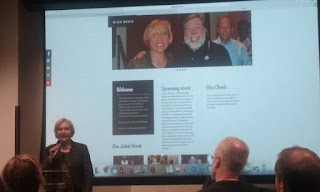 My friend Olga Chervyakova, founder of Olga Media, spoke about how she built her brand. She worked in immunology at the start of her career in America after leaving Russia. Eventually she realized that helping people makes one go farther and she started her media career to do just that. She gives credit to fashion designers from many ethnic groups while she wore their clothes during her media appearances. Olga recommends that designers loan their clothes to media professionals in exchange for free publicity.

Olga has other tips on media branding and work attitudes. Her Russian accent helps her sound distinctive in radio. Working with actors and models taught her the importance of treating everyone with respect even if they are moody. I can attest that Olga treats me with respect at the many tech conferences we have attended together in Silicon Valley, even when I am moody.

Fashionistas can enjoy their several days of exhibits and some runway action thanks to San Francisco's style gurus. I don't stick around for fashion shows because I have enough awesome clothes to last a lifetime. I even have a trunk full of 1960s era dress shirts I got for free, and I rotate them through my weekly appearances at major conferences. The Fashion Community Week models probably wouldn't want to wear my stuff, but that's okay if it leaves more awesome threads for yours truly.
Created by Anthony Alfidi at 9/26/2015 09:58:00 PM