Dreamforce 2015, Day 1: Veterans And Everyone Else

Dreamforce 2015 opened today in San Francisco. I was on hand for technology, punditry, and revelry. Ubiquitous computing means nerds no longer monopolize this mystery cult. Former jocks and cheerleaders now have reason to relive their college glory days after work hours at a major technology convention. My readers can join the fun vicariously. 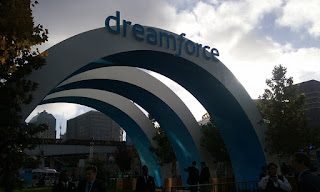 Here is the majestic entrance to the Dreampark at Dreamforce. It's the part of Howard Street in front of Moscone Center that's blocked off so rock bands can play and adults can lounge in beanbag chairs. I remember they had some giant inflatable cloud-like honeycomb thing in 2013. I must say that I framed that shot really well with the sunlight coming through the clouds. It's totally appropriate for cloud computing. 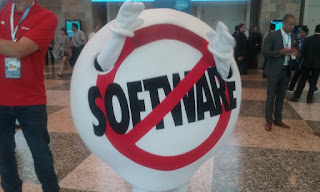 The Salesforce mascot, SaaSy, makes its rounds among the convention exhibits. I wonder if this thing has its own dedicated driver so it can zip around to all of the Dreamforce hot spots. The prevalence of college-type images is noticeable. The entire neighborhood becomes a "campus." Afterparties don't have togas or kegs but they obviously draw from fraternity and sorority culture. The company has a mascot that cheers on its people from the sidelines of their main event. Dreamforce culture is the perfect reflection of San Francisco's never-ending adolescence. The difference is that the grown-ups on scene make serious money. Somehow it all works as a business. 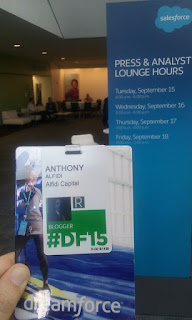 I give you my obligatory badge selfie. Normally this is the first image I display in a long article about a conference, but not today. I am an analyst. Special people like me get special access to special places like the Press / Analyst Lounge at major conferences. The activities inside the lounge are privileged and confidential. It reminds me of a secure military facility, with better amenities. 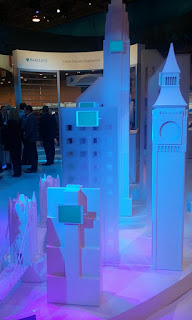 Barclays brings London to San Francisco. Barclays fired me in 2007. Note the white banner at the top. Yeah, "client success experience," whatever. The clients were dumb, I had no success, and it was a very bad experience. The financial market chatter about automating CRM never mentions that this will eliminate most of the jobs in sales and support. Buying a dream home is still an emotional trigger and mortgage brokers know it's a hook. It only takes one domain expert to design the decision rules for an AI broker that will pitch more effectively as it learns from thousands of daily client interactions.

I had planned on attending the more prominent keynotes today. The long lines for those of us who were not pre-registered far in advance were a deterrent. I would rather use my time productively than stand in line. I went to a couple of workshops for veterans instead. The audience and speakers were much more to my liking than what I usually encounter at tech shows. Veterans Workshop described their training for moderately and severely disabled veterans. VetsinTech coordinates education, employment, and entrepreneurship for technology-minded veterans in several of its nationwide chapters. I frequently help out VetsinTech and I know they're the real deal. Veterans2Work holds classes year-round in Salesforce administrator certification. Employers need to know the research showing how job candidate aptitude is several times more predictive of performance than a resume or a structured interview. My former employers never understood my military aptitude and were very eager to terminate me.

Salesforce developed its VetForce initiative to get veterans into cloud CRM jobs. A slew of speakers from Salesforce's partner network, many of whom were themselves veterans, spoke about how they recruited and trained veterans to meet their internal hiring goals. They all know the HR research about how veteran-led companies perform well and that's why they are developing the next decade's bench strength now. One vet's biggest tip was to network for advocates inside an enterprise who can unlock hidden job vacancies. I tried that among my alumni networks over a decade ago and all of my potential advocates shut me out precisely because I was a veteran. Maybe times really are changing now that America's wars in the Middle East are no longer horrific news stories. 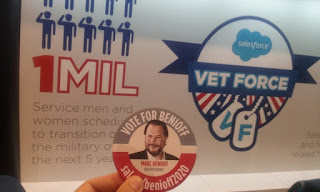 The expo floor in Moscone West prominently displayed the VetForce agenda. VetForce has a candidate for this election cycle. He's as rich as a wild-haired real estate developer but without a mean streak. He also knows more about email and enterprise security than a typical senior government official.

Check back with me tomorrow to see if anyone other than America's veterans is making a difference in cloud computing. I did pay attention to one space imagery company planning to launch a small constellation of satellites. They see profit in tracking climate change, mining output, and ocean transport activity. Veterans know plenty about satellite imagery and rocketry. There's another natural career fit, at a higher altitude than the cloud.
Created by Anthony Alfidi at 9/15/2015 11:34:00 PM