The final Dreamforce 2015 day felt like attendance was dropping off. Maybe people were hungover from the previous night's Dreamfest bash. All of that booze had to go somewhere and it sure didn't go into my mouth. I had three major events on my Friday agenda, besides scoring more free food, and I hit them all.

The ocean innovation panel was totally worth my time. Microplastic concentrations are increasing everywhere and disturbing the ocean's food supply chain. I have been waiting for the "marine industrial revolution" ever since I first noticed a couple of ocean floor mining stocks at the San Francisco Hard Assets Conference a decade ago. Those stocks have always traded in the pennies, and other attempts at ocean mining of manganese nodules, rare earth elements, and other minerals have all fizzled due to prohibitive costs and logistics. The innovators on this Dreamforce stage are mostly focused on gathering data about how human activity impacts the oceans. Crowdsourced Big Data will help us stop fishing piracy and preserve the export income of fishing-dependent emerging economies. I see an IoT theme in the plan for satellites and sensors that can estimate ecosystem size and wildlife migration patterns.

I tried to think of ways our ocean innovators could monetize their concepts. I have thus far come up empty. Financial incentives for recycling the floating plastic collecting in ocean gyres would have to include something analogous to carbon credit markets for air pollution. The last big tech idea to solve oceanic problems was to drop iron filings into the deep blue sea to help plankton stimulate the food chain. The science on iron fertilization is incomplete, so science needs the Big Data on ocean conditions pronto.

The Friday marathon themed keynote is usually the least data-driven part of Dreamforce. It's still entertaining but most attendees are too tired by this day to do the heavy lifting of more cloud computing. This year's theme for the fun lectures was "mindfulness," a topic suited to the amorphous spirituality of many San Francisco Bay Area people. Scraping away the pop-culture veneer leaves a core of knowledge comparable to ancient mystery schools. The subject is probably a fruitful training resource for military leaders and intelligence professionals who must think clearly under stress. Now you see my interest in the topic given my background. Namaste, and all that.

The most useful mindfulness speaker was Chade-Meng Tan, Google's Jolly Good Fellow and one of its earliest employees. He developed a mindfulness approach through his Search Inside Yourself Leadership Institute that is part of Google's emotional intelligence curriculum. Engineers approach undefined problems armed with data and principles from modern neuroscience. The data augments the traditional practices of spiritual masters who needed several generations of trial and error to produce personal enlightenment in students. I totally agree with Meng that remaining calm under stress is a leadership skill. I experienced a Zen moment when he described the "Big Sky Mind" concept, so do your Google search of that term and understand that we are not our emotions. Meng found that the best performing leaders score high in affection, and he confirmed this with US military special operators and combat pilots. That's all the confirmation I need.

Padmasree Warrior and Larry Brilliant are probably living national treasures. I will not attempt to restate their wisdom on my humble blog. Their influential writings are within everyone's reach thanks to Google. Highly evolved human masters can speak for themselves. Tara Brach and Jack Kornfield gave us some practical tips on staying calm while solving problems. I like the concept of imagining an enlightened master entering one's body to help accomplish a goal. I would probably imagine a historical figure or modern luminary who actually built something real. Marc Benioff's acolytes in Salesforce would probably imagine him as the Buddha embodiment entering their personas. If it works, use it. 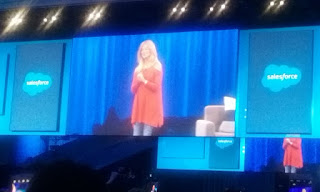 Goldie Hawn was the final mindfulness speaker, pictured above. She was the least professionally qualified person to be on stage for this topic, but she was here because she has been on stage all her life. She shared personal stories of her overly sensitive childhood and anxiety attacks as a rising Hollywood starlet. It was embarrassing to hear her wax ecstatic for the 1970s transcendental meditation movement. She claims we create our reality . . . well, that kind of "woo" sells a lot of books. It worked for Shirley MacLaine when she was pitching New Age stuff in the 1980s.

I really hope Goldie's video from Dreamforce gets a public release. Unserious people should not run large projects. Her educational foundation is a nice hobby for a Hollywood star, nothing more. The lady is not a neuroscientist, psychologist, or even a peer-reviewed philosopher. It's okay for mindfulness programs to employ celebrities as spokespeople because they are great at staying in character. They're just not so great at running programs outside their natural expertise. Goldie briefly lapsed into ditzy blonde mode towards the end of her talk when she tried to explain the brain's amygdala. Goldie has stayed in character her entire career. The funny babe she played on Rowan and Martin's Laugh-In is not just a character, because that's the real Goldie. I prefer to remember her that way instead of thinking about all of the people at Dreamforce who somehow gave her a standing ovation. I also prefer to remember her work in There's a Girl in My Soup, especially the scene where she gets out of bed wearing nothing. I would really like to remember her work in Wildcats, especially the scene where she's in the bathtub showing everything. Goldie still looks great in her older years, but she's not my type. I really am trying to show women more respect here, people. I respect Goldie for what she does best.

Meng Tan joined the other mindfulness speakers on stage and left us with awesome advice: "Be excellent to each other." I had my own mindful quote in my head: "And . . . party on, dudes." Those two lines complete the wisdom of Bill and Ted's Excellent Adventure. The mindfulness marathon was some kind of adventure. 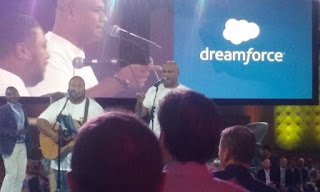 I went over to Moscone West for the final session with Marc Benioff and Parker Harris. I scored a prime seat for the next surprising spectacle, pictured above. Two big guys came out to sing Hawaiian-style songs, although I think the guitarist said he was from New Zealand. Anyway, these guys' warm-up act pumped the crowd with high-energy rhythms. Analysts and VIPs were in a conga line around the stage. A couple of very attractive babes were shaking it right in front of me. I totally respect their enthusiasm. 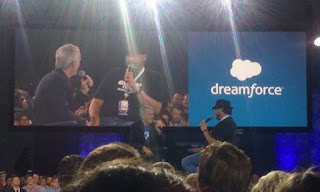 Marc and Parker answered a handful of tech-related questions about Salesforce products. Marc went gangsta for some sartorial reason but they did not have any epic rap battle. I bet George Zimmer could have set these guys up with some tuxedos from Generation Tux if they needed more style. Anyway, the absolute best moment came when one practitioner criticized immature language in some of Salesforce's marketing as insufficiently respectful of its audience's expertise. She thought that power users deserved more advanced, mature treatment. I was very impressed with the caring way that Marc probed the questioner for one specific improvement suggestion, and she offered it to the audience's applause. Wow. Marc then shared an internal employee consensus that developed on how marketing should address a prospect's CRM/cloud decision maker with a budget. Wow. I had just witnessed a major CEO spend more than 15 minutes in live, extemporaneous problem solving. I can get jaded sometimes, but now I really need to put aside my skepticism. Marc Benioff is the real deal. If he is the same in private as he is in public, then I will be doubly impressed.

Marc and Parker also had some advice for aspiring entrepreneurs. Here it is, paraphrased but unfiltered. Think more about solving problems and finding great people than building tech. Stay focused, work hard, build a great company. Get the timing right. Be happy; get away from unhappy situations (like when Marc was at Oracle). Take customer feedback seriously and adjust the product. Re-ask yourself the hardest questions in a continual process.

I don't think I can add any more to that pile of knowledge. My own knowledge base is now somewhat deeper thanks to Dreamforce 2015. I still plan to hold my own super tech fest someday. I'll invite Marc and crew to be VIP guests.
Created by Anthony Alfidi at 9/19/2015 11:46:00 PM