I have attended the Cleantech Open's events for three years now and I always come back for more. I had to jump into the CTO's Global Forum 2015 last week to see what this year's class of startups had done. Badge selfies are my bona fides because they prove I am not some AI bot randomly generating blog content. 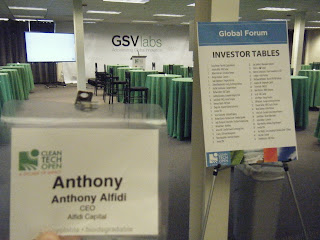 Driving down to the CTO's home at GSVlabs is always worth my time. The co-working trend is now a serious thing. Startups eschew privacy and security by taking open-space collaboration to an extreme. I think the next trend could be co-working outdoors, where startups can plot their huge markets on picnic tables. Nah, just kidding. I wouldn't want to do office work outside because wild animals like bears and coyotes run around out there looking for people to eat. Smart VCs won't fund a startup where the founders risk getting devoured by packs of wild beasts. 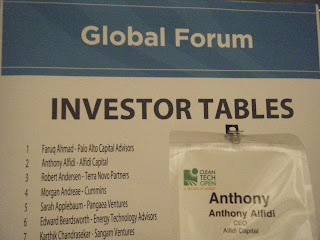 The Investor Connect speed-dating round had a table reserved for yours truly, the CEO of Alfidi Capital. Someday I'll be #1 but this time I was at the #2 table. I am usually the #1 genius on hand wherever I go in life. Most normal people recognize this as soon as they meet me. Serious VCs and angel investors were at the other tables and I had the chance to interact with a few of them during breaks between meeting startups. Sharing insights helps me understand how much startups learn during their early phases.

I will share what I learned from the startups I met at my table. These are general impressions that cover many verticals. Addressing a scalable market means going after a big demographic whose price points and buying power are easily understood. Going after boutique markets with fragmented demographics (like organic farmers, for example) means a startup's marketing channels will be less efficient. Lowered efficiency in anything, especially finding a marketing channel, means a startup needs a longer runway to profitability. Proprietary technology must be difficult to duplicate. A simple device with common components is easy for a competitor to reverse engineer.

I also attended the CTO's Celebration Day in San Francisco's Herbst Theatre. It was my first visit to the Herbst since the Veterans Building's renovation. The drinking fountains on multiple floors actually work now after several years of inactivity. The downstairs bar looks pretty snazzy. Dag-nabbit, I should have taken photos.

The winners and finalists ran the gamut of tech. I heard pitches from startups doing biomass gasification, carbon nanotubes, pollution tracking, and SaaS analytics. I can't connect with businesses outside the United States because my personal prerogative is to only work with companies located in the US that American citizens own. I'm sure there are plenty of those to find.

Famed VC Ira Ehrenpreis gave his keynote that doubled as a highlight reel of his favorite investments. I'm pretty sure I heard him give this talk before at a conference down in Silicon Valley at least a year ago because I recognized many of the slides and themes. He told us that the best time for tech investing is right after a sector bursts its bubble, because the final survivors are in the best position to be long-term winners. I think the solar sector is still in the middle of its shakeout, so anyone making panels or modules after the last low-quality Chinese producer goes bankrupt will be in a sweet spot. I also think solar suppliers that adhere to all of the DOE EERE SunShot Initiative's standards will have an easier time convincing developers to include them in supply chains. Ira also mentioned the "second bottom line" importance of ESG criteria, another set of guidelines our aspiring startups must adopt if they want to attract impact investors.

I noted one concluding quote with interest: "There's no such thing as a bad contact, but there is such a thing as a bad way to follow up on a contact." Well, I had plenty of bad contacts when I worked in sales, and plenty more when I was between jobs trying to make a career for myself. There really are tons of bad people in the world and they succeed in spite of themselves. I avoid those types because I'd rather meet the ambitious folks populating the cleantech sector. If I get rich after investing in one of these startups, then I could finally afford to be a big-shot sponsor of the Cleantech Open.
Created by Anthony Alfidi at 11/23/2015 08:36:00 PM