Startup And Tech Mixer With A Silver Statue For March 2015

Startup and Tech Mixer did it again in March 2015.  They pulled off an edgy conference last week with an immersion lounge, double-powered cold coffee, and a silver statue of a gorgeous woman.  I like coming to STMixer in San Francisco because it's a thought-provoking break form the normal tech conference circuit.  Here comes my reaction to the spectacle.

I had a few minutes to wander the exhibit floors before the lectures started.  The billed "6D immersive experience" looked too decadent for my tastes, and it wasn't something I could capture on camera anyway due to its mature theme and dark enclosure.  The actors involved were allowed to interact with participants in ways that required both discretion and consent.  If I wanted that kind of experience I would have gone to one of the gentleman's venues on Broadway instead of a tech conference.  Oh BTW, I have attended such classy places in the past for exactly the right reasons, and I always got my money's worth.

The exhibit floor featured some really powerful cold brewed coffee.  The brewers said they focus on office deliveries but I would buy their stuff if they distributed through Trader Joe's.  Another vendor had some iPad case that doubled as a keyboard, but I've seen keyboard apps on the iPad that don't require the purchase of a specialized case.  The babes running all of the booths were certainly attractive enough for my tastes.

I headed back to the conference room with my fill of power coffee and healthy snack bars.  The MC said success often takes thirteen failures to get something right.  I am still short of that number so more failures are always in store.  He also said unwavering commitment matters.  You betcha, dude.  Plenty of people tried to talk me into abandoning Alfidi Capital for entry level jobs in unskilled labor.  I told them all to take a hike.

The first cluster of speakers knew something about marketing revolutions.  Their cited stats showed that entrepreneurship is an aspiration for only a minority of people.  Everyone else on the planet would rather hand control of their fate to someone else.  The marketing technology landscape is very crowded due to low entry barriers.  The "question mark" box of the BCG growth-share matrix for companies like Hootsuite and Marketo will eventually narrow down once they buy smaller rivals.  The most compelling marketing innovations reduce customer acquisition cost (CAC).  The panel's comments on difficulties in branding convinced me there's a disruptive opportunity for creating metrics that assess brand image and awareness.  Expect to see those metrics on a social media dashboard at some point.  The moderator described "analytical overoptimization" as an unneeded narrowing of the marketing funnel that doesn't identify new customers.  I would have called it the "paralysis of analysis."  I would also refer marketers to Google's suite of list marketing tools that recapture parts of a digital marketing funnel.  Whatever marketing tools we end up using must drive improvement in a product's growth-share matrix position.  The marketing tools that break out of "question mark" status themselves deserve acquirers' attention. 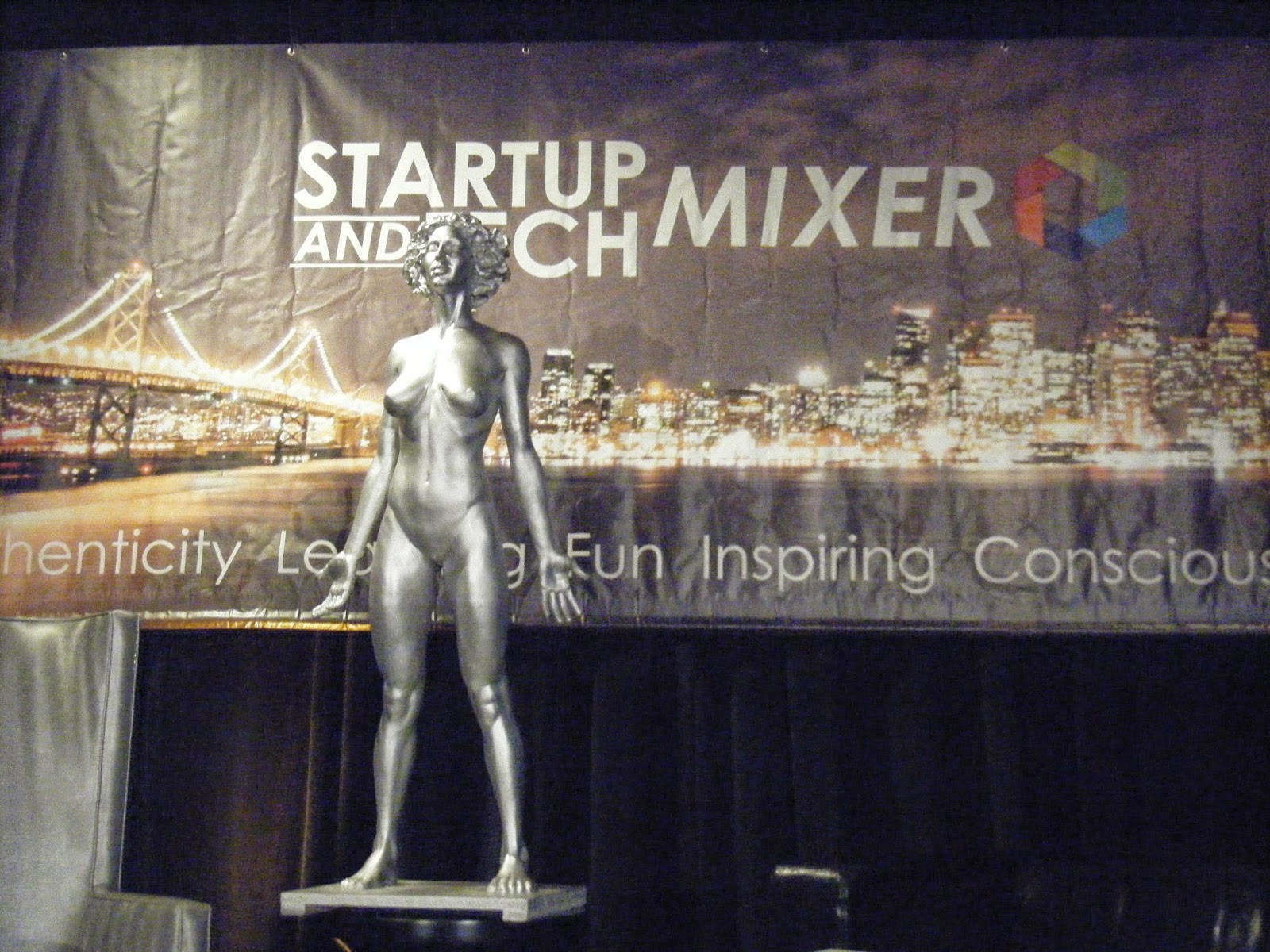 Marco Cochrane and Julia Whitelaw shared the stage to talk about art and society.  The silver-colored sculpture above is called "R-Evolution," the third and final piece in the Bliss Project featured at Burning Man.  The model who posed for all three pieces is Jamie Deja Solis, one awesome-looking babe who has no objection to showing the world her natural form.  The sculpture had many of the people here transfixed while it was on display.  The beauty of the female form has an incredible power.  Marco's work emphasizes the humanity of female figures and Burning Man's pervasive exhibitions make for a suitable showcase.   I used to have a naively innocent view of Burning Man as a laid-back, temporary art colony.  Lately I have heard so much about the event's massive mind-altering substance use that I'm glad I've never attended.  Marco and Julia noted that assault has also been a serious problem at Burning Man.  I am not optimistic that conditions will ever improve.  Anyone fascinated by anarchy should examine what really happens when a community with no formal governance or norms tries to suppress dangerous behavior.  I hope Marco and Julia keep making great art, because I really like to look at attractive women.  I also hope that any women attending Burning Man to admire art do everything possible to protect themselves from drug-addled predators.

The third panel taught us how to channel the failure, anger and shame that are common in tech entrepreneurship.  This subject is right up my alley and I've got all the answers.  I fail when corrupt people steal my work; I no longer work with corrupt people.  I get angry when I think of all the stupid people I've met who succeed despite their incompetence; I channel this anger into my blog articles.  I have been shamed by spoiled trust fund babies who demanded that I depart social events in San Francisco; I now get invited to so many events that I don't have to worry about the small-minded people who don't want me around.  The panelists don't need therapists; they need to get hard core about sticking it to stupid losers.  That's the Anthony Alfidi solution to nonsense in the human race.  I also suggest that any attractive woman who feels shame should take after Deja Solis' example and pose showing it all for artists.  That gal has every reason to be proud of her toned, athletic body.  Pride comes from satisfaction with the self, once discomfort and shame are expelled.

I have to object to some of the coping tactics the failure panelists advocated at STMixer.  I'll mention the "fake it until you make it" attitude that so many entrepreneurs feel they must project.  I think it's a mental trap that will eventually lead to lots of anger and shame.  I am unable to fake anything, especially a false image of success.  Admitting the lack of progress I have sometimes experienced in life invites insults from successful people.  I would rather take the insults than live with the cognitive dissonance of a success picture out of whack with reality.  I also do not agree with the panelist who said that admitting vulnerability builds trust.  A whole bunch of people stopped trusting me at times when I admitted I was having career problems.  Furthermore, I do not agree with the panelist who said we should find experienced greybeard advisors.  Folks, greybeards are a dime a dozen and most aren't even worth that one dime.  The greybeards I've sought in San Francisco have either given me fraudulent advice or told me not to have a career.  That is why I no longer need or tolerate mentoring.  I'll close by saying that the "quantified self" movement in modern health care should also apply to mental health.  I'll bet wearables can make a huge impact developing biofeedback methods that improve mental well-being.  The Google Glass modality would be perfect if it included sensors that monitored the wearer's mental state.  Speaking of health care, that's the perfect segue into the next panel. 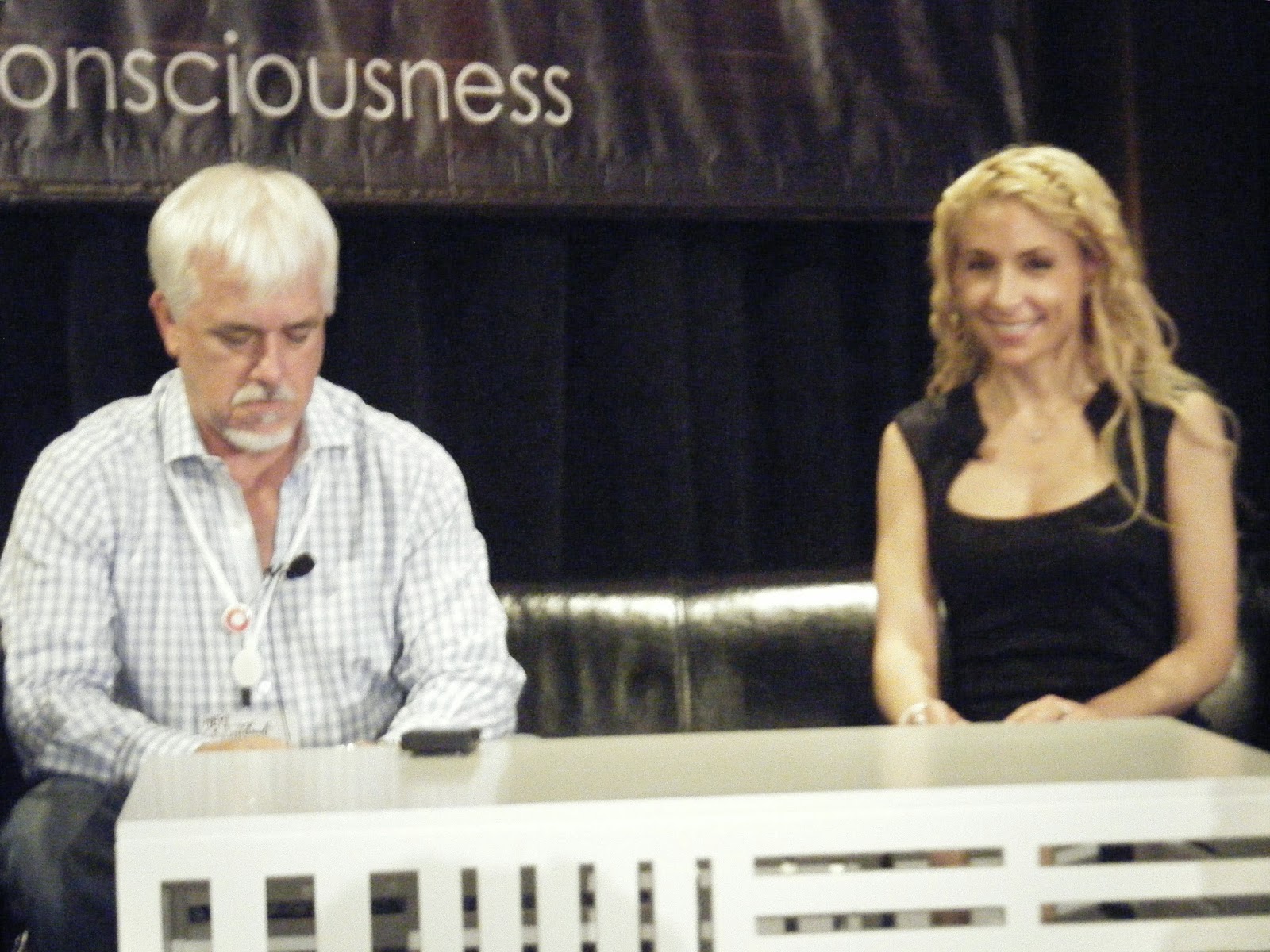 The final panel covered medical technology and health care innovation.  My friend Robin Farmanfarmaian did an awesome job discussing some of the advances we can expect.  She's the gorgeous blonde woman in the photo above.  Her own experiences with inefficiencies in health care give her enormous credibility.  I can't wait to see the m-health revolution come to the smartphone, because it would give me an excuse to actually buy a smartphone for the first time.

Patient empowerment is the name of the game.  Merging Big Data from the health care system with patient data from mobile devices means changing some privacy protocols, but I think most consumers will accept privacy tradeoffs if it means optimized patient self-management.  Our society will eventually reach a decision point where the benefits of sharing patient data will obviously outweigh privacy concerns.  The irony is that patients will not be the ones making that decision.  I am certain that federal government officials in DHS administering the Affordable Care Act exchange will make that decision on their own with no Congressional oversight.

Truly personalized medicine awaits more tech advances in mildly intrusive delivery modalities.  Robin mentioned a few applications in tissue engineering that won't be in the realm of science fiction for much longer.  Growing replacement organs from your own stem cells eliminates the rejection problems of transplanted organs.  It also allows growing test cells for customized drugs designed exclusively for one patient's unique biochemical pattern.  Artificial intelligence (AI) will probably be a necessity in patient management if the projected physician shortage in America's future becomes reality.  AIs can diagnose people remotely and keep routine cases out of expensive emergency rooms.  The panel could have spent more time discussing mental health but I'm sure an entire conference could cover that subject and still not be exhaustive.  Insurance coverage for non-traditional treatments is coming once ACA auditors have enough data on the costs it will save.

The STMixer people put on a great show.  I am always entertained when I come.  Every tech conference needs more women to attend.  Maybe a female-themed STMixer would attract them.  They may be turned off by statues of completely bare women at a conference, but the babes at Burning Man are highly tech-savvy and they don't mind getting natural at all.
Created by Anthony Alfidi at 3/29/2015 10:28:00 PM