I can't resist business conclaves.  I ought to resist that impulse once in a while.  I attended last week's Small Business Expo San Francisco thinking I could learn something from subject matter experts on the scene.  The people I met there have a lot to learn themselves.  They will probably learn it the hard way. 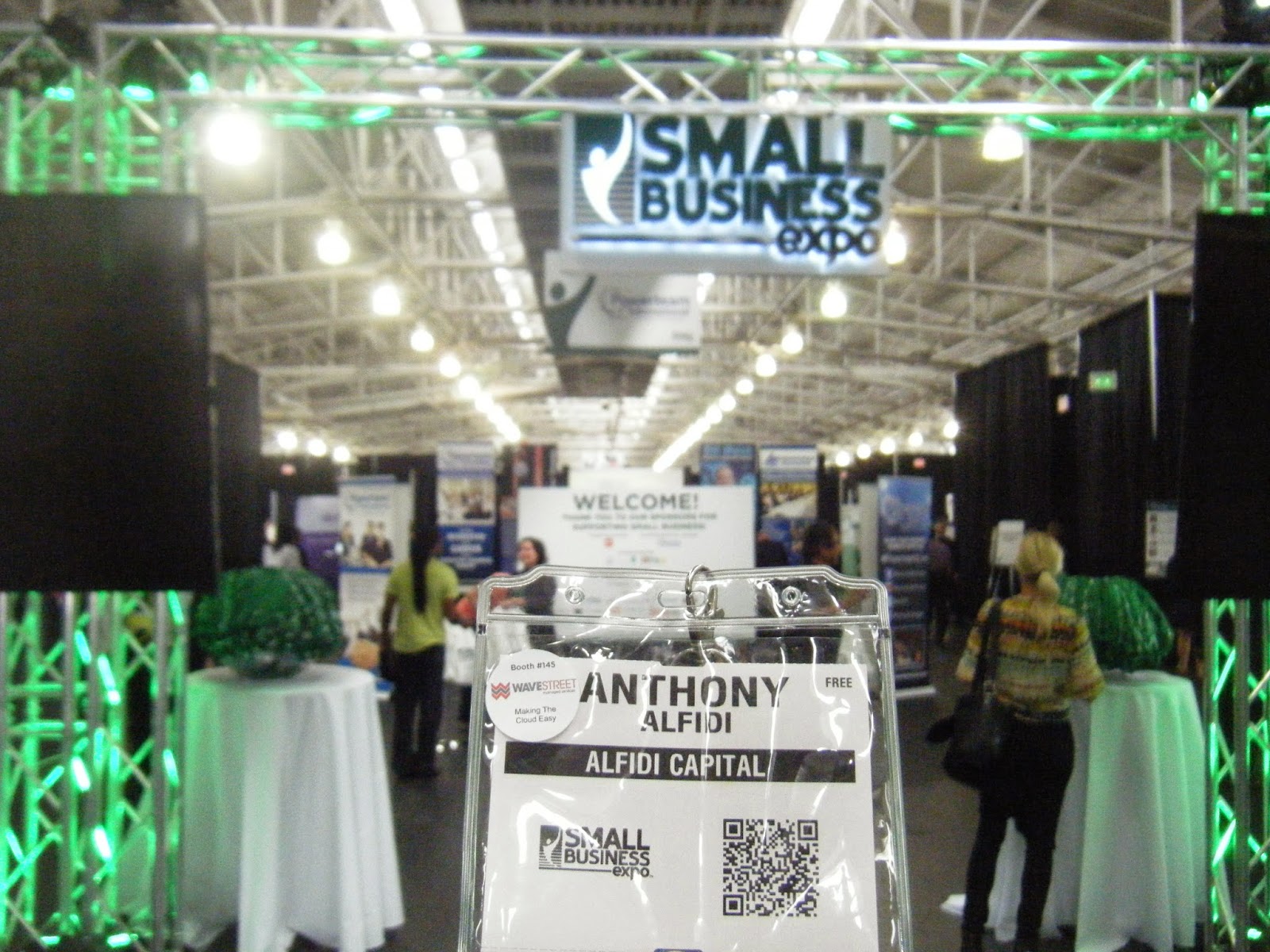 I walked into the Fort Mason Pavilion to the very green-lit sight you see above.  The first harbinger of woe was the general cluelessness of the vendor representatives on the expo floor.  The booth people I encountered mostly gave poor explanations of their services.  I asked one booth babe with a VOIP provider what her company offered, and she pointed to a flat screen TV while mumbling "Uh, five free phones."  Her babe pal tried to save her with a lame assist:  "Uh, it's security.  You can talk to this guy."  They were both blondes.  Whenever I get two lame handoffs at a vendor booth, I get the heck out of there.

I sat in several workshops that were nothing but regurgitated pep talks and asinine product pitches.  The first scheduled main stage speaker was a no-show, so a "business coach" filled in.  Maybe ten people attended in a seating arrangement set for a couple of hundred.  I don't know what the guy's qualifications were to be a business coach because he displayed pictures of his family instead of describing his credentials or professional history.  That told me he was aiming for a low-information audience that could relate to his storytelling ability.  Folks, that's not how I interact with tech startups run by educated professionals.  Wait, it gets more entertaining.  The coach dude asked me about my ideal client, and I said, "Myself!  I'm sick of Wall Street and Silicon Valley, and I enjoy making the world angry because I'm sick of humans."  He did not get the message and asked me twice about my biggest challenge (hint:  it's to get web traffic); he forgot what I told him the first time even though he wrote it on his white board!

The coach dude continued to amuse me with non sequiturs quoted from such business luminaries as . . . Michael Jackson, the freakish pop star.   The whole train wreck reminded me of other free teaser seminars I attended that were sales pitches for very expensive "coaching" programs.  I have never ever paid for coaching because I'm the best coach I've ever known.  He asked the tiny crowd to name a leader's single biggest mistake; I thought my biggest mistake was attending this talk.   His reasons for leadership failure were kindergarten level gibberish, not the results of peer-reviewed scholarship.  He cited a "Law of the Lid" that came out of nowhere, with no data or references.  I walked out of that talk after about twenty minutes of nonsense (it started about seven minutes late).  I could not take any more amateurish "business coaching" that was nothing more than a motivational pep talk for the vulnerable fools in the audience.

I ate a nine dollar sandwich at the very limited concession stand in the Pavilion.  An event of this size should have at least had some food trucks outside.  Alas, it was not meant to be.  Picking a spot in the Pavilion's upper corner where I could view the Golden Gate Bridge was the highlight of my day.  Staying far above the nonsense below was the best decision I made at the expo.

I had to venture back down to the workshops just to gauge the general intelligence of the attendees.  If the content was lame and the people ate it up, they were morons.  Sure enough, other presenters allowed me to lower my expectations by the minute.  One presenter discussing Web optimization said WordPress wasn't a robust enough platform for a business website.  Say what?!  Does he even know how thoroughly WordPress has penetrated the Web?!  Wow, such stunning ignorance.

Another presenter's slide show didn't work so she read from her printed slides verbatim.  She obviously had not prepared to do anything other than rattle off stats without context.  Her talk was supposed to be about the power of integrating social media with mobile tech.  None of her points came across well or made sense.  I have heard about social and mobile at countless events from true experts, and her effort did not even come close to clearing the first step on a stairway to competence.  She was at least a hot babe, so she was fun to look at even though she wasn't showing cleavage or bare legs.  I imagined her stripping off because it would have made my time in her workshop worthwhile.  Her best line?  "The last time you left home without your smartphone, you felt naked."  I sure wish she had felt naked right there and then.

I thought the talk on venture funding would at least be recognizable, since that's the space I inhabit.  I was wrong.  The speaker had a couple of prepared bullet points about how VCs invest in the "leader and plan" of a business.  Huh?  That's it?  Really?  He did mention the goal of a 10x return, but nowhere did I hear the distinction between scaling up a tech startup into a billion dollar segment and the challenges of something more prosaic (like a restaurant).  He also revealed his inexperience by stating he liked to invest in a business plan with (I kid you not) . . . "ups and downs . . . the outsourcing team . . . the unemployable experts on the advisory board."  Folks, none of that makes any sense to experienced venture investors.  The dude was talking out of his hindquarters.  I was really amused at this circus.

Much of what the "venture funding" guy said was really another disguised sales pitch for business coaching.  I hope my intelligent readers see a pattern emerging.  The offers for special discounted fees and vast co-investing networks were all over the place.  The name-dropping of famous "friends and partners" came fast and furious.  Blink and you'll miss a celebrity.  I asked him what he thought of crowdfunding, and he galled me by saying it was illegal!  Say what, bro?!  If he had actually read the JOBS Act and the SEC's latest rules he would know about the legal protections in place.  I was right in the front row and clearly stated that he was incorrect, loud enough for him to hear me.  He did not even break his stride.  I was amazed at how many imbeciles stayed through his entire talk, lapping up everything.  P.T. Barnum was right about suckers, and a lot of them are now being born in San Francisco.

The only useful information I picked up was a rehash of bank loan tips I've seen before at much better conferences.  I still cannot believe I wasted half of a perfectly good day attending this expo.  I could have spent that time productively blogging.  Instead I ended up as the only real thought leader in a pavilion full of aspirational ding-dongs.  You won't catch me at this thing next year.  Buh-bye.
Created by Anthony Alfidi at 9/21/2014 10:35:00 PM