I checked out SVForum's "Disrupting Unemployment" event last night, part of the Innovation for Jobs (i4j) project.  I drove on down to Microsoft's Silicon Valley campus to get acquainted with thought leaders cutting through the bleeding edge of career transformations.  I had to get my fill of chicken fingers and dolmas before the intellectual action began.  Check out my awesome badge selfie before I get down to business. 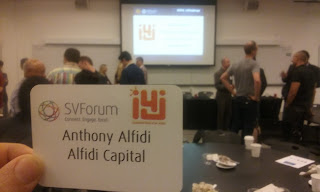 The official welcome laid out the global problem at hand.  A whole bunch of people in the world are either not gainfully employed at decent incomes, or not totally committed to their chosen work.  My Google search for "percent of global labor force not earning sufficient income" turned up a bunch of reports from McKinsey, the US Department of Labor, and Pew Research showing how global markets increasingly challenge ethnic minorities and low-skilled workers.  I am intrigued with i4j's thesis that new digital career-matching tools will reduce job frictions and add to personal income at the microeconomic level, eventually boosting the US's lackluster macroeconomic growth.  I recall from my undergraduate studies in economics (yes, I still have all of my textbooks and course notes) that structural unemployment is the stickiest part of the unemployment picture.  Rapid tech changes will add to that problem.  I will tune in to the i4jECO Summit in January 2016 to see how thought leaders are solving that problem.

Legendary tech guru John Hagel gave the keynote last night.  I have followed his work for many years and we are connected through friends, but last night was the first time I came face to face with this guy.  He is totally brilliant.  I'm sure he would find my own brilliance impressive but I wasn't there to steal his thunder.  Anyway, John laid out the three challenges of automation, accelerating skill obsolescence, and a substandard educational system that hinder more effective career matches.  He thinks society still needs institutions that can scale learning for a mass market.  His key is connecting work to passion.  Got it, scale and passion go together, sort of like peanut butter and jelly but without the bread.

My friend Robin Farmanfarmaian moderated the expert panel.  I have no idea where she gets the energy to organize all of these high-profile events.  I would need a fusion reactor to generate as much energy as she manifests.  Alrighty then, enough about my energy deficit.  The panel addressed the US's national competitiveness first.  I am disappointed that the US is dropping in rank on a leading freedom index.  That's what we get for adopting bailouts and managed health care regimes as the new normal.  At least one panelist finally recognized that Silicon Valley's penchant for solving the rich world's problems in speedy transport and gourmet meal delivery won't always convert to developing countries that really need basic WiFi infrastructure.

The one panelist who insisted on being a negative Nellie eventually struck a few nerves.  He was on a roll panning major telecom companies as losers, and describing a mostly jobless future where automation forces more people to earn less.  His argument with another panelist about how coal workers recovered from mine troubles would have made more sense if either one of them had cited hard data.  One audience member rudely called baloney on the negativity by citing The Seamless City, about how public-private partnerships and smart metrics solve urban blight.  He could have waited until the Q and A to make his point without interrupting.  I'd like to see San Francisco become a seamless city, once the mayor takes on the non-profits who lock up city contracts and grants.

One audience member claimed that some measure of worldwide return on assets now exceeds the return on work.  I find that hard to believe without a citation.  Record ROIs worldwide are lately more a function of central bank monetary stimulus.  Once that steroid infusion ends, the pendulum should swing back to worker productivity.  The HR community has metrics for the ROI of workforce investments, especially for job-specific training.  Look them up at SHRM for yourself.  Come on, people, nothing is impossible.  The entrepreneurs in the audience working on people-centric innovations can get it done.

I stuck around longer than necessary in case anyone needed to partake of my wisdom, or in case any attractive women wanted my phone number.  No one took me up on either count.  That gave me time to grab more food and drink.  SVForum held my interest all night.
Created by Anthony Alfidi at 8/20/2015 09:01:00 PM