What a busy week!  I took Oracle OpenWorld 2014 very seriously, unlike a lot of sales managers and product engineers who just went to goof off for five days.  I studied Larry Ellison's welcome keynote, Didier Bonnet's Capgemini digital transformation keynote, and Larry's cloud keynote closely for real solutions.  Workable solutions must fix real problems.  I went back to the expo floor to find those problems in enterprise computing. 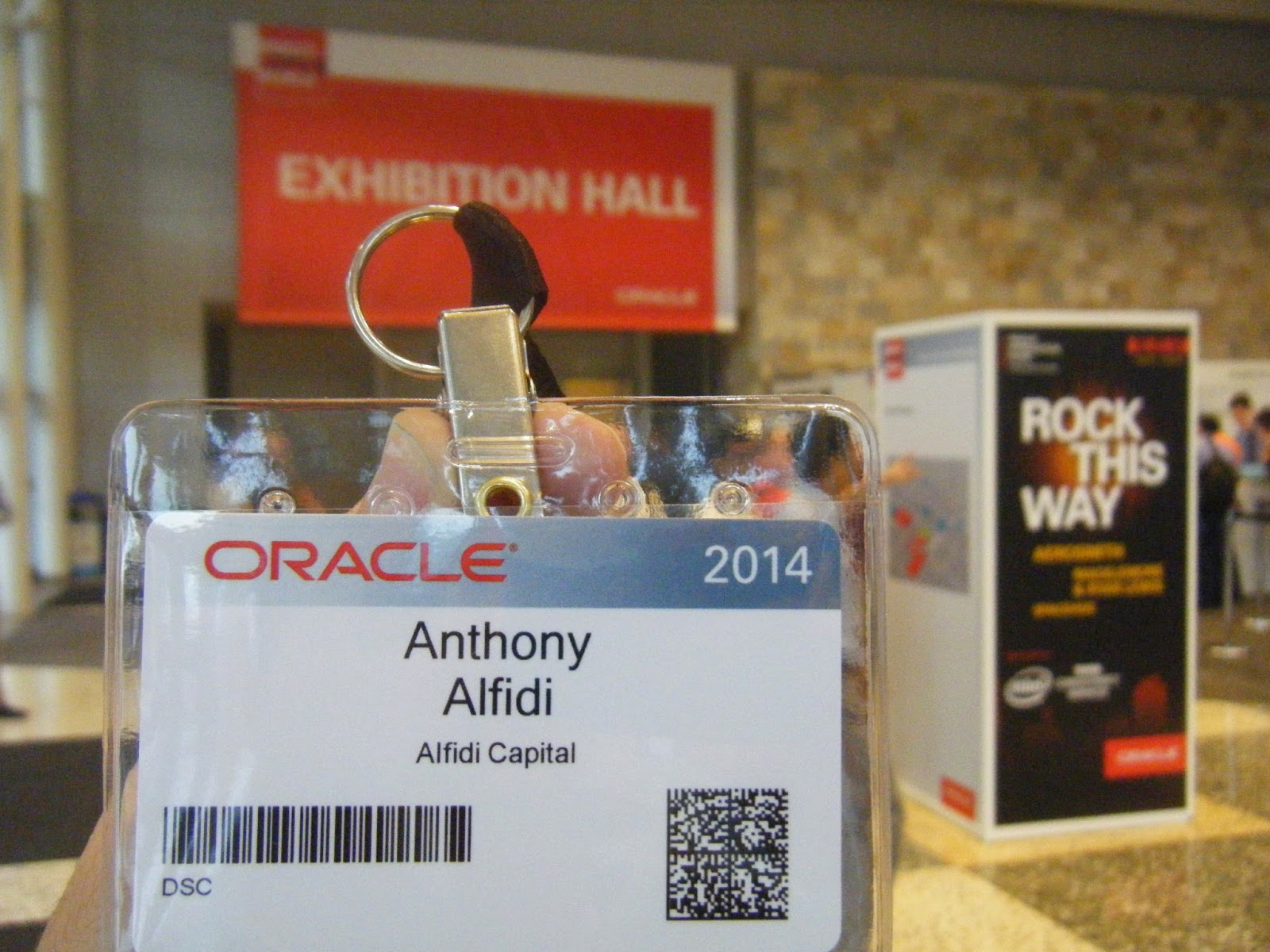 I have picked up a new habit at the largest technology conferences.  I take a CustDev approach to identifying the biggest pain points among as many exhibitors as possible.  I canvassed exactly 28 vendors, mostly ISVs and system integrators.  I tried wherever possible to speak to the most senior people present but I most often ended up talking to their sales team leader.  The sales people in any organization are the front line fighters in the marketplace but they don't always have the C-suite's holistic perspective.

I identified three major pain points for small and medium sized businesses (SMBs) in the enterprise IT sector:  human capital management (HCM), go-to-market tactics, and Oracle's flagship product weaknesses.  I had to sort through tons of griping about market conditions and tech specifics to find those three themes.

First, HCM poses several problems for vendors.  They have trouble finding the right employees with the right skills for their product life cycles.  They also have trouble keeping their senior people (including top executives) focused on tasks where KPI dashboards would help.  This is not a problem for Oracle to solve unless the vendors themselves suddenly start using Oracle's HCM apps.  The apps looked pretty good during keynote demos, so the vendors should at least try using them to manage on-boarding and retention.

Second, vendors have difficulty finding enough customers within their identified verticals.  Target marketing doesn't work without the right channels to get the word out about products.  Some of the vendors have difficulty explaining their value proposition.  Once again, these aren't areas where Oracle can be helpful.  The exhibitors who said these things often came across as incompetent; perhaps they are evidence of the HCM problem above where quality people are hard to find.

Finally, vendors had many gripes about weaknesses in Oracle's product strategy.  The most common gripe was "lack of innovation" in Oracle's apps.  I suspect this is partially a function of Oracle's acquisition strategy, as if vendors are confused about how some newly purchased company fits into Oracle's product universe.  The support the vendors get uses many non-standard protocols, and there's confusion about Oracle's licensing agreements and outsourcing requirements.

The single most articulate description of Oracle's problem was a perceived mismatch between form factors.  Here's the best way I can summarize this perception.  Hadoop's form factor doesn't match the typical data center's hardware configuration.  It works better on small Linux systems, which are the opposite of virtualization.  Hadoop makes a bunch of small systems look like one big system.  Virtualization makes a big system look like an app small enough to fit on a single device.  The Oracle keynotes I attended did not make nuanced distinctions between Hadoop architectures and virtualization.  Indeed, I came away with the impression that Oracle treats the two phenomena as interchangeable within the same architecture!  If a non-IT person like me comes away with that impression of Oracle's product architecture, imagine the heartburn in the partner ecosystem as systems integration consultants have to explain to clients which cloud configuration optimizes a specific hardware configuration.

The long form factor problem I just described leads into my general conclusion that Oracle will have significant difficulty in the coming cloud price war.  I identified the four primary combatants in my article on Larry's welcome keynote:  Oracle, Apple, Amazon, and Google.  I'll throw in Salesforce because they obviously have a role to play in which company dominates each layer of the cloud stack (SaaS, IaaS, PaaS).  I will now make three major predictions for the near-term evolution of the enterprise cloud sector.  Please note that this is all speculation; I have no idea what the leaders of these companies are actually going to do.  Prepare yourselves for my genius!

First, Apple will win the price war in cloud services.  I make this prediction primarily on the basis of Apple's cash position.  Apple has limited enterprise cloud offerings now but their new partnership with IBM means they can add familiar capabilities to their mobile ecosystem.  IBM's Watson Analytics brings an unbelievably powerful computational engine to anything Apple builds in its cloud.  I expect Google to be a solid second-place challenger to Apple in the cloud, based on its profitability and strong ecosystem for developers.  These two companies will dominate at least the IaaS and PaaS stacks of the cloud.  SaaS is another story, which I will address below.

Second, I expect Amazon to encounter serious problems in a cloud price war.  They cannot avoid fighting Apple and Google on prices, and now Oracle can squeeze them on a third front.  Amazon's inconsistent history of profitability places it at a severe disadvantage in any price war.  Once it realizes it has lost this price war in the next year or two, it will face a very hard choice about what kind of company it wants to remain.  Amazon's long history of problems is so well-known that it warrants a Wikipedia page.  I believe that Amazon Web Services (AWS) would be a suitable candidate for spinoff if it remains at least somewhat healthy.  Some data center REIT looking to grow its capacity cheaply would salivate at the chance to grab AWS.  The remainder of Amazon would then return to the core of its origins as an e-commerce portal.  Maybe rump Amazon would make sense in a tie-up with another e-commerce portal.  It makes even more sense now that eBay and PayPal are splitting up.  History records how the Ottoman Empire was once called the "sick man of Europe."  I believe Amazon will go down in history as the "sick man of the Internet."  Feel free to quote me on that score.  I want to be the first analyst to go on record with that phrase.

Finally, I expect Oracle and Salesforce to fight it out for SaaS dominance once they realize they will not dominate the other two cloud stacks.  These two companies increasingly resemble the Big 3 Detroit automakers before the 2008 financial meltdown.  They favor acquisitions of other SaaS platforms over internal product innovation.  I expect Salesforce to eventually move ahead in SaaS market share because Oracle still has the extra hurdle to cross in moving its legacy on-premise apps into the cloud.  Salesforce is already in the cloud.  I may be making too much of Oracle's difficulty, and it will certainly remain a major vendor even if Salesforce moves ahead in CRM and ERP sales. 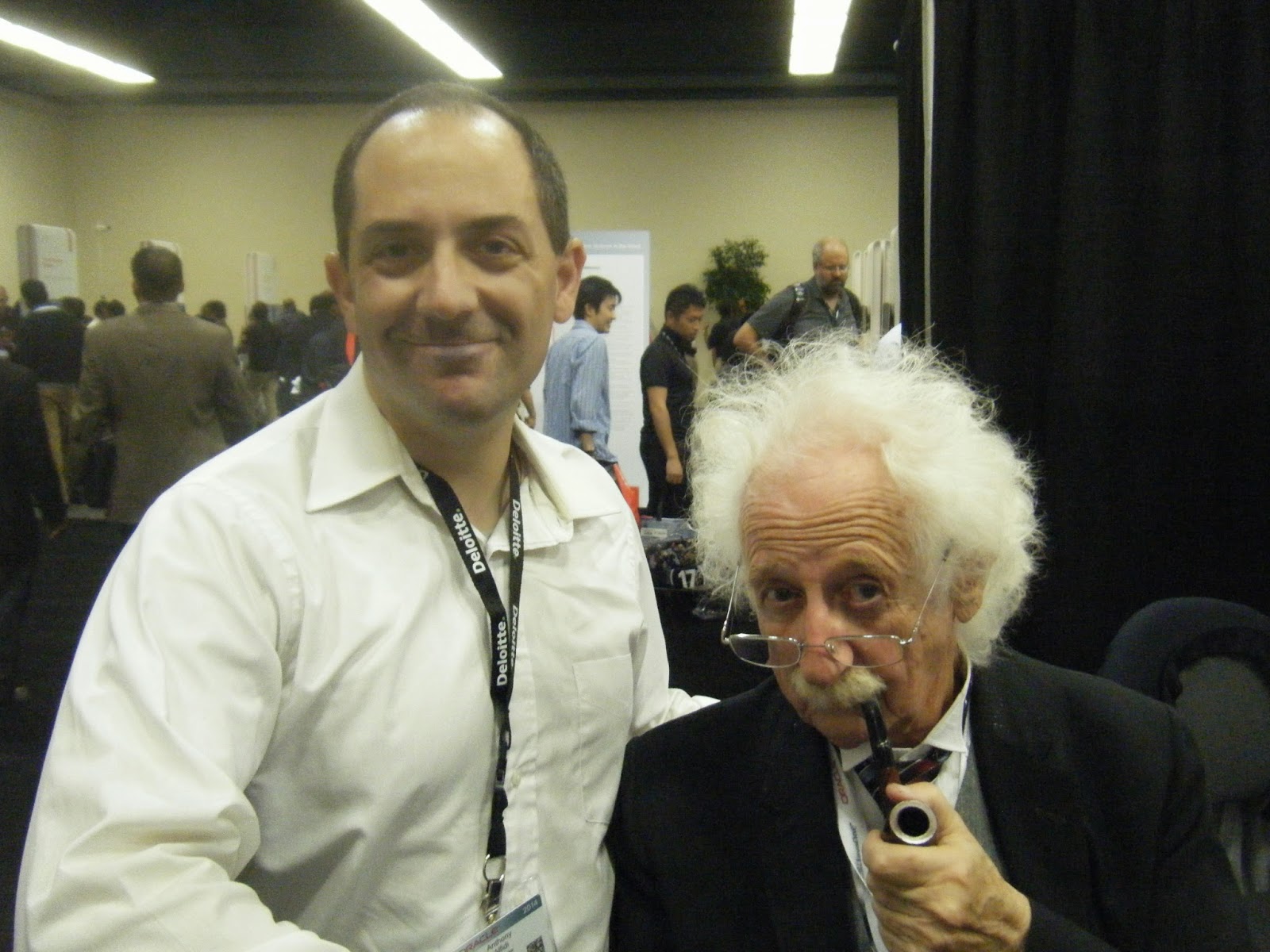 I did find one guy who could probably solve all of the problems in the enterprise cloud sector.  That's me with Albert Einstein above.  Okay, it's not really him, but it was cool of one vendor to dress up one of its team members as the famous scientist.  The real Albert Einstein supposedly said he would spend far more time describing a problem than solving it.  Good for him.  I spent far more time looking at hot booth babes than I did solving any cloud sector problems.  One hot booth babe was so enthralled with me that she offered to take off with me right there and then to go jump my bones on the beach.  I declined the opportunity to nail her because I'm very selective with babes.  I must be getting more handsome by the day because attractive women are making me those offers with increasing regularity.

I also enjoyed the multiple beer stations and after-hours receptions that are part of the OpenWorld experience.  I ate for free several nights in a row thanks to the largesse of major sponsors.  I did not witness any executives making drunken fools of themselves.  The big shots who host rich executives in their hotel penthouse suites declined to invite me up for champagne and caviar.  I wonder what could have caused that oversight.  Maybe I should nominate myself for Oracle's Markie Award just to make sure they don't repeat this unfortunate error next year. 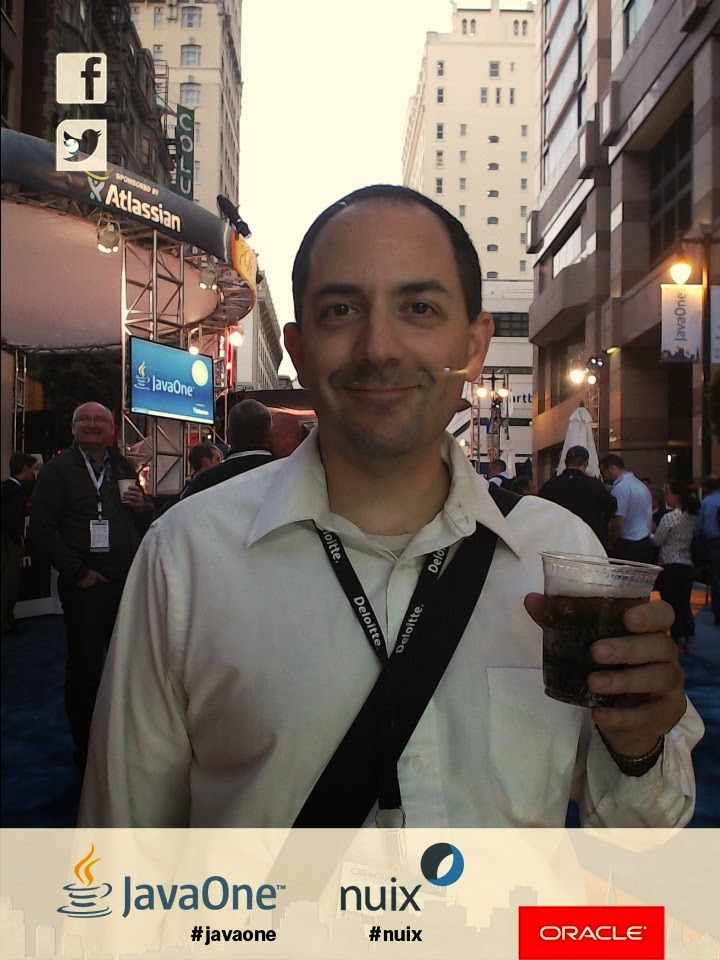 I had to kick back at Oracle's branded "Duke's Cafe," really an open-air lounge that closed off a block of Taylor Street near the Hotel Nikko.  That gourmet root beer you see in my hand was outta sight.  Alfidi Capital has now completed a tour-de-force at Oracle OpenWorld.  The conference was enjoyable but Dreamforce is more fun.  I look forward to being a marquee speaker at any of these big tech conferences, provided they give me a free full-conference analyst pass, access to root beer, and the attention of the hottest babes in their partner networks.  Larry Ellison did a cameo in Iron Man 2 and asked Tony Stark to give him a call.  Hey Larry, you can call me instead.  I'm also named Tony and I'm just as entertaining.