I did not have time for either the full CTO World Congress or DeveloperWeek in 2016. I had to make an appearance at DeveloperWeek's VIP reception at Galvanize SF because I am a VIP after many appearances at tech events in Silicon Valley. I avoided the sticky badge and went straight for the food and beverages, along with the snazzy brand icon photo below. 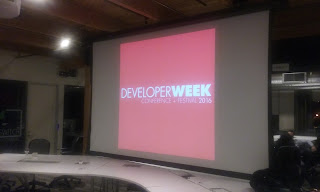 I sat for the brief awards ceremony in between my rounds of booze. Several well-funded startups have made a big splash among the media portals tracking software developers. I have always believed that the ultimate success milestone in monetization is actually making a profit rather than impressing tech writers. I hold a minority view as long as VC-backed startups can afford PR in tech media.

Any reception at Galvanize brings out a crowd of people who play at having tech careers but aren't really serious. They were mostly downstairs tonight for another tech reception. These people are usually in the second or third round of hires at VC-backed startups because they enjoy riding the freebie gravy train. The permanent adolescents in The City never grow up. They will still have roommates into their late 40s and will always complain that dating apps never have a match for their personalities. If someone could create a matchmaking app for total losers, the app would find a boatload of beta testers in San Francisco.

Congratulations to the DevOps people who won prizes at DeveloperWeek and other conferences. The hiring mixers are brimming with developers jumping into their prize-winning startups. I can drink any of them under the table if I have free food before social hour begins. Winning at drinking is easy for me even with an empty stomach but I have to let the public think that I at least make an effort.
Created by Anthony Alfidi at 2/16/2016 10:20:00 PM