SFMOMA has gone and done it again.  They have installed artwork that boggles the mind.  Mark di Suvero is an artist who sticks big steel beams into the ground.  Sometimes he welds or rivets them together.  He even hangs giant steel balls on them that twist in the wind.  SFMOMA is paying for an exhibition of this art that runs until May 2014.  I had to see this for myself today, before crowds of know-nothing gawkers start playing "emperor's new clothes" just to look sophisticated. 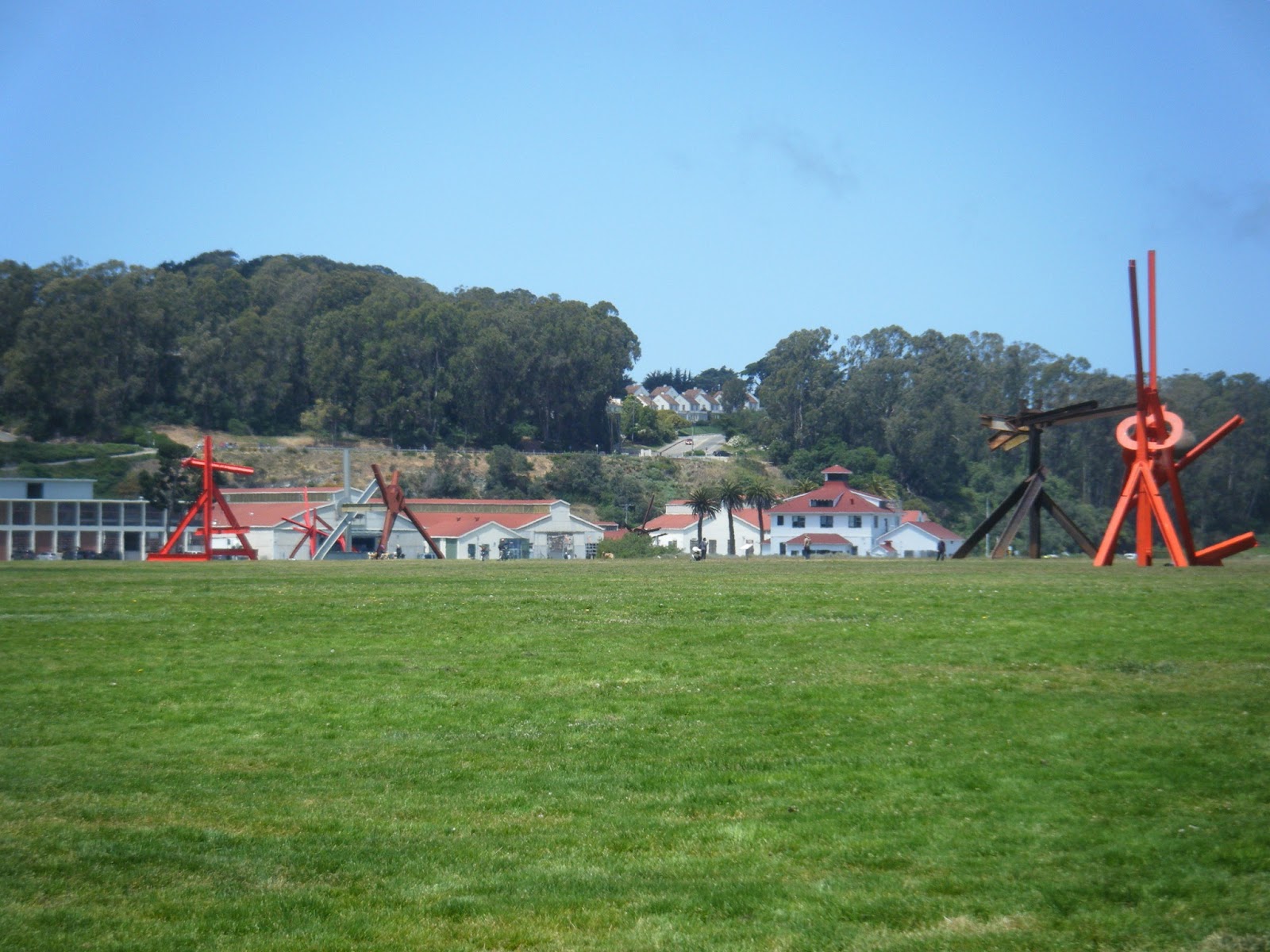 I took the photo above while walking across Crissy Field from the southeast.  This scene looks like a bad industrial accident from a distance at a low angle.  It also looks like a junkyard from a high angle (when I drove in down Lincoln Blvd.).  A junkyard would be an improvement because junk can be crushed, recycled, and repurposed into useful objects.  This art installation allows for no such options; it is therefore less valuable than a junkyard.  Art should allow us to use our imaginations.  Here I go.  This array of random steel reminds me of the Czech hedgehogs the German army deployed on the beaches of Normandy to thwart an Allied landing.  These things are too big to stop tanks, so they must be intended to stop an invasion of Megatron and his Decepticons if the evil Transformers ever invade San Francisco.  I saw plenty of bulldozers and long-haul trucks around the Presidio today, so I will assume those are really Autobots clandestinely prepared to defend us.  The Presidio has long been a bulwark of the nation's defense system, after all.  "Autobots, roll out!"  My Ford Mustang would make a really cool Autobot.  I can imagine it vaporizing pointless art with some well-placed plasma beam shots, or something. 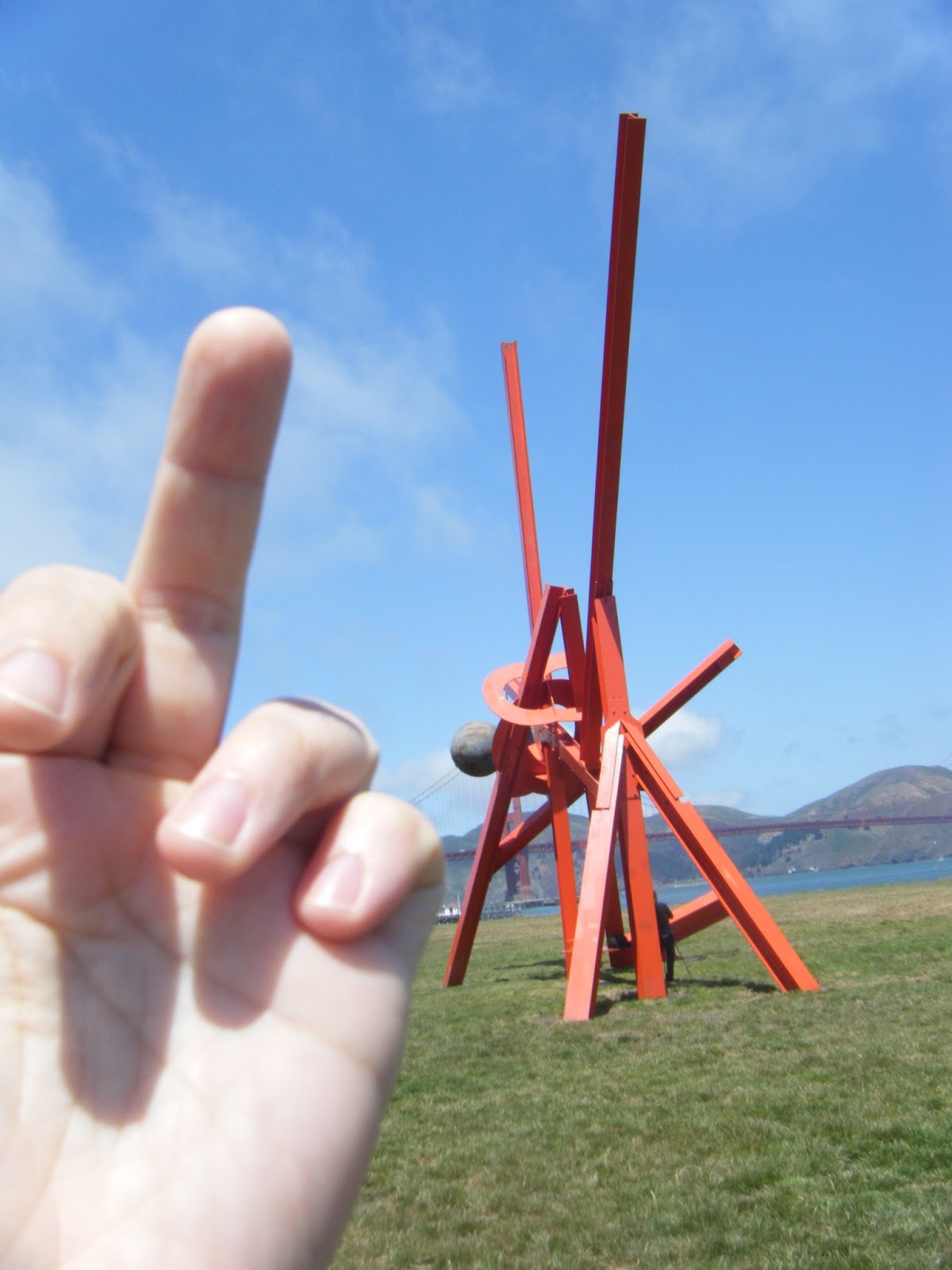 I took a second photo when I got close to this big red jumble of oversized pick-up sticks.  Remember that kid's game?  It was fun to play but this giant grown-up version is no fun at all.  I decided to liven things up by conducting a live-action interpretation of what this object reminded me of the most - a middle finger salute.  The artist has stated that his first memory of arriving in America was passing under the Golden Gate Bridge, and that his steel beams' color schemes pay homage to the bridge.  That's really funny.  The Golden Gate Bridge is a design classic and these beams are just beams.  The bridge serves a useful purpose and these beams serve to irritate.  The bridge is Art Deco.  These beams might as well be Art Yucko.  I truly believe that artists lacking in imagination deliberately create works that mock classical design and make fools out of patrons.  Speaking of the Golden Gate Bridge, the walking trail around the bridge toll center has a sample girder that was crushed to test engineering tolerances.  Maybe that bent steel could be part of this art installation.  Think about it:  One single steel column that performed a useful role alongside numerous steel beams that are totally useless. 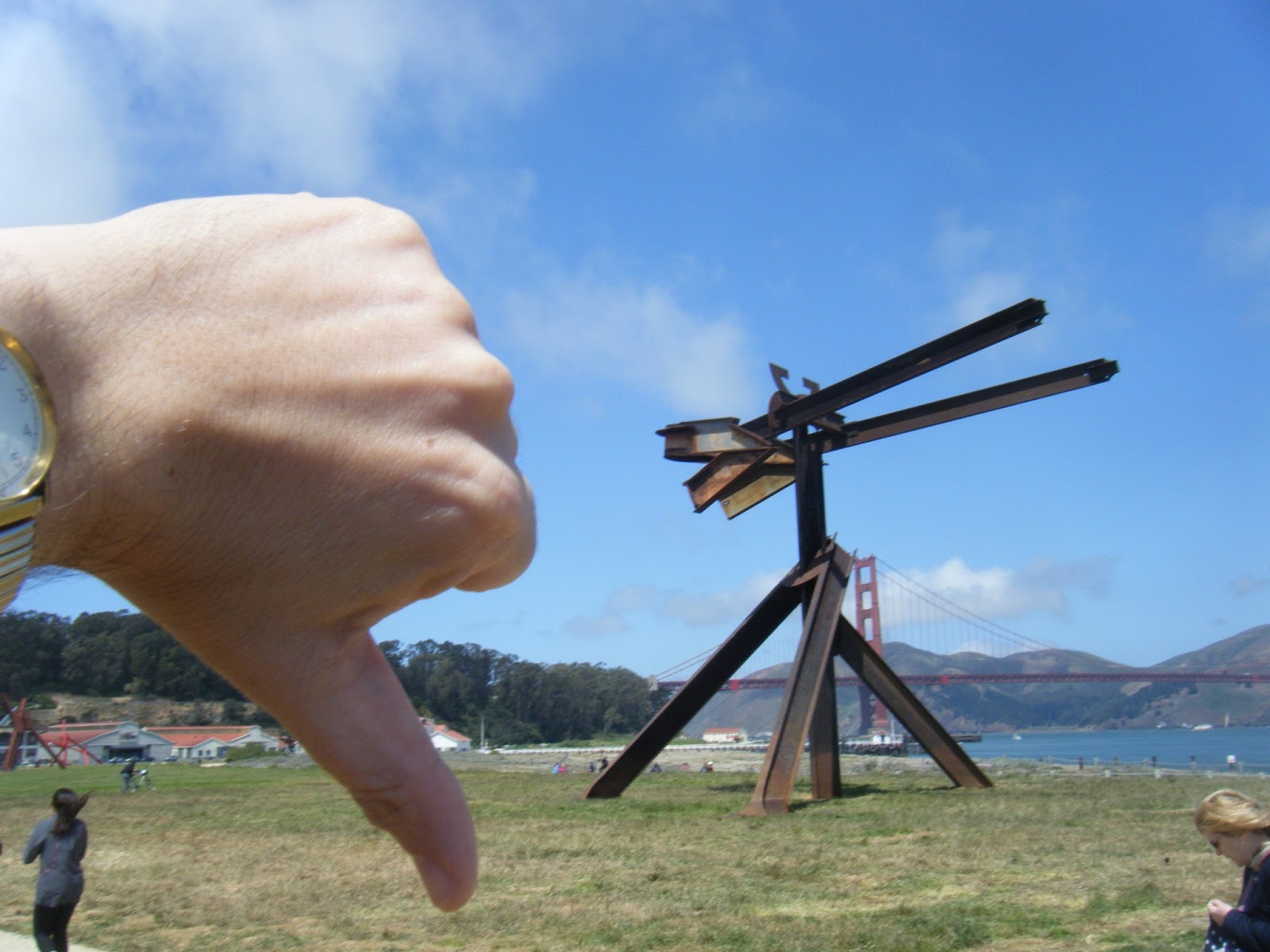 I took this final photo of a big brown thing that reminded me of space junk displayed in the background scenes of the Star Wars films.  Maybe the Jawas decided this was too big to cut up and put into their Sandcrawler, so they left it here to scare Tusken Raiders away from their scavenging grounds.  I'm displaying the thumbs-down gesture as disapproval of the Jawas' poor business sense.  They could have scrapped this thing and sold it for at least a buck fifty.

This exhibit runs for a year.  A whole stinking, miserable year during which visitors to The City will scoff at our civic taste and locals will have their vision assaulted by eyesores.  I shake my head whenever our distinguished city leaders make our town the object of national ridicule.  It's even worse when "artists" exploit our lack of common sense to laugh all the way to the bank.  I received an invitation to the kick-off party that SFMOMA will hold for big shots tomorrow, May 18, at Crissy Field.  I have chosen not to attend.  I cannot stomach the sight of these monstrosities.  Instead I'll attend the Maker Faire this weekend, where real artisans make things worth seeing.
Created by Anthony Alfidi at 5/17/2013 09:00:00 PM