I made my inaugural visit to the Maker Faire this year.  This is a well-attended festival for innovators, hobbyists, tinkerers, inventors, and anyone else who is into DIY creativity.  There was too much going on here for me to do the faire justice with a single review.  I learned so much that I'll be seeding many future blog posts with maker concepts that I think will apply to business.  I normally take notes at conferences but here I'll concentrate on the exhibits that stood out as relevant to my own priorities.

I attended several of the talks given at the Center Stage and elsewhere.  The Center Stage talks were all recorded to appear on FORA.tv, so I don't need to repeat them here.  I will display some illustrated summaries that a visual artist rendered during each talk.  She was cute and I wish I had her contact info.  If she sees this blog article, I hope she contacts me because I really admire her work.  My impressions follow each artistic rendering. 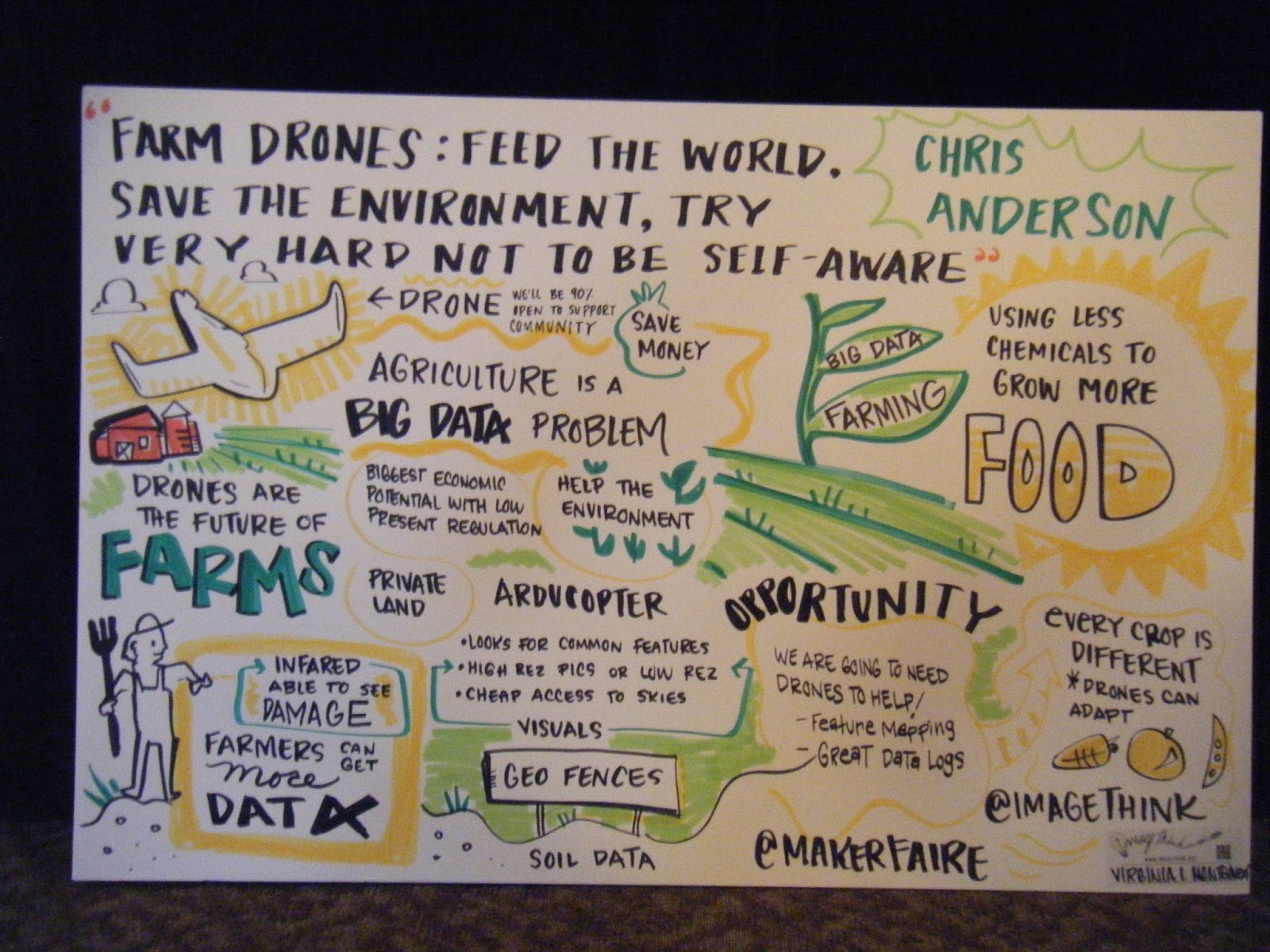 This talk on the use of drones to perform aerial crop surveys illustrates a tremendous opportunity for agribusiness.  Farmers can program a drone to follow GPS waypoints for surveys of crop damage and irrigation distribution.  Farmers can optimize pesticide and herbicide application with details on crop damage.  I've read a lot recently about thieves who scavenge farms in Central California for metal they can sell as scrap.  I believe drones and remote sensors can also play a role in wide-area security for agribusiness.  I asked a drone operator over at the faire's Drone Games pavilion about programming drone movements; he said drones can be set to track moving objects on the ground automatically.  If I were a farmer, I'd program remote cameras and sensors (magnetic, acoustic, and seismic) to monitor my farm's perimeter and have a drone on standby to launch at any intrusion point.  The drone would track a fleeing suspect long enough to get a video recording of their facial features, gait, and vehicle license plate for use by law enforcement.  Imagine how the widespread use of privately-owned drones as security tools would support law and order in rural areas. 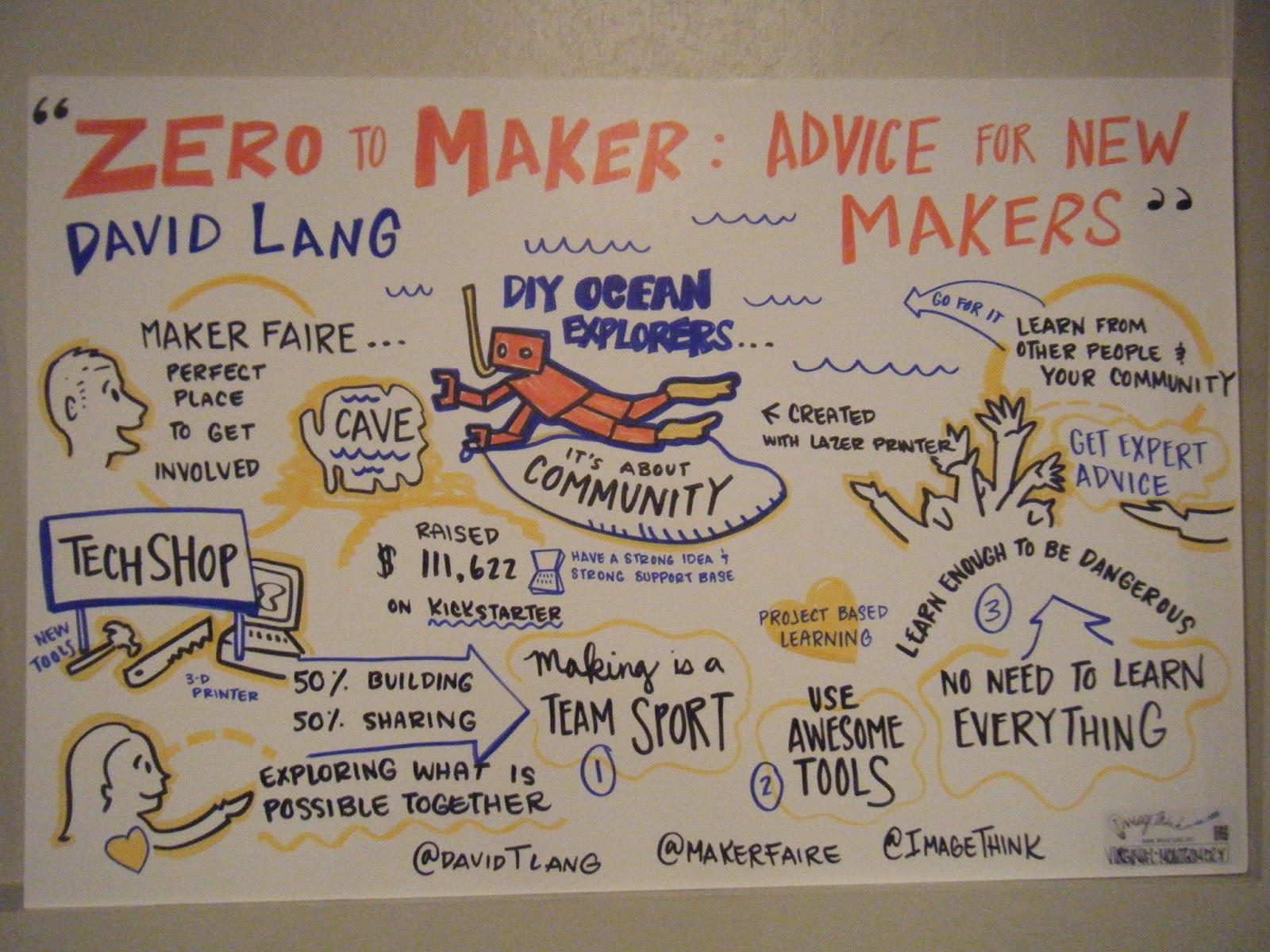 Going from zero to maker is easy.  You don't have to know everything.  You do have to try and try again because making mistakes and improving prototypes is a normal part of discovery.  Crowdfunding a cool project can really help its visibility. 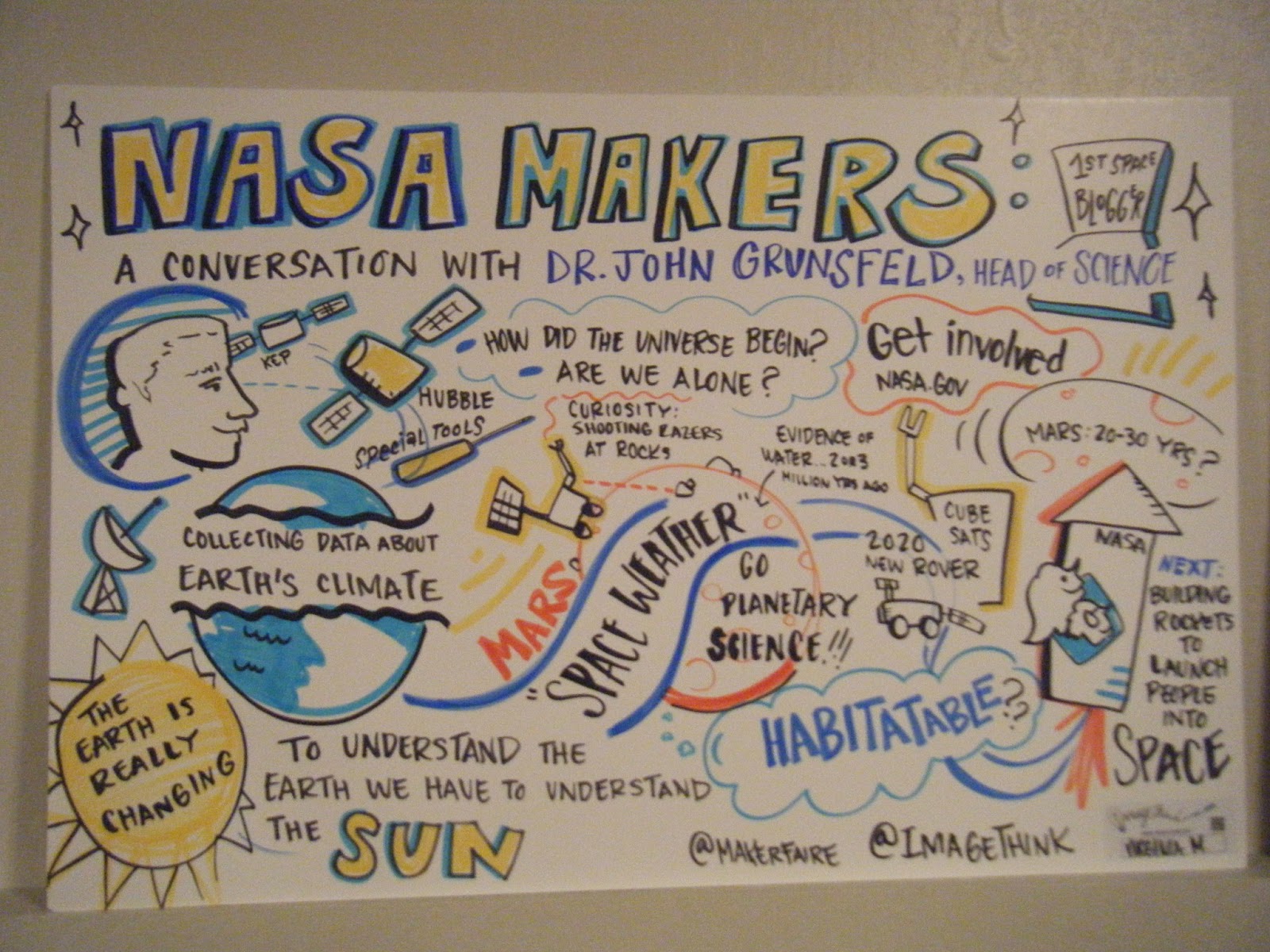 I only caught part of the NASA astronaut's talk.  The best thing I learned from him was that NASA's interest in developing a fusion-powered spacecraft will eventually accelerate the development of fusion energy for commercial use on Earth. 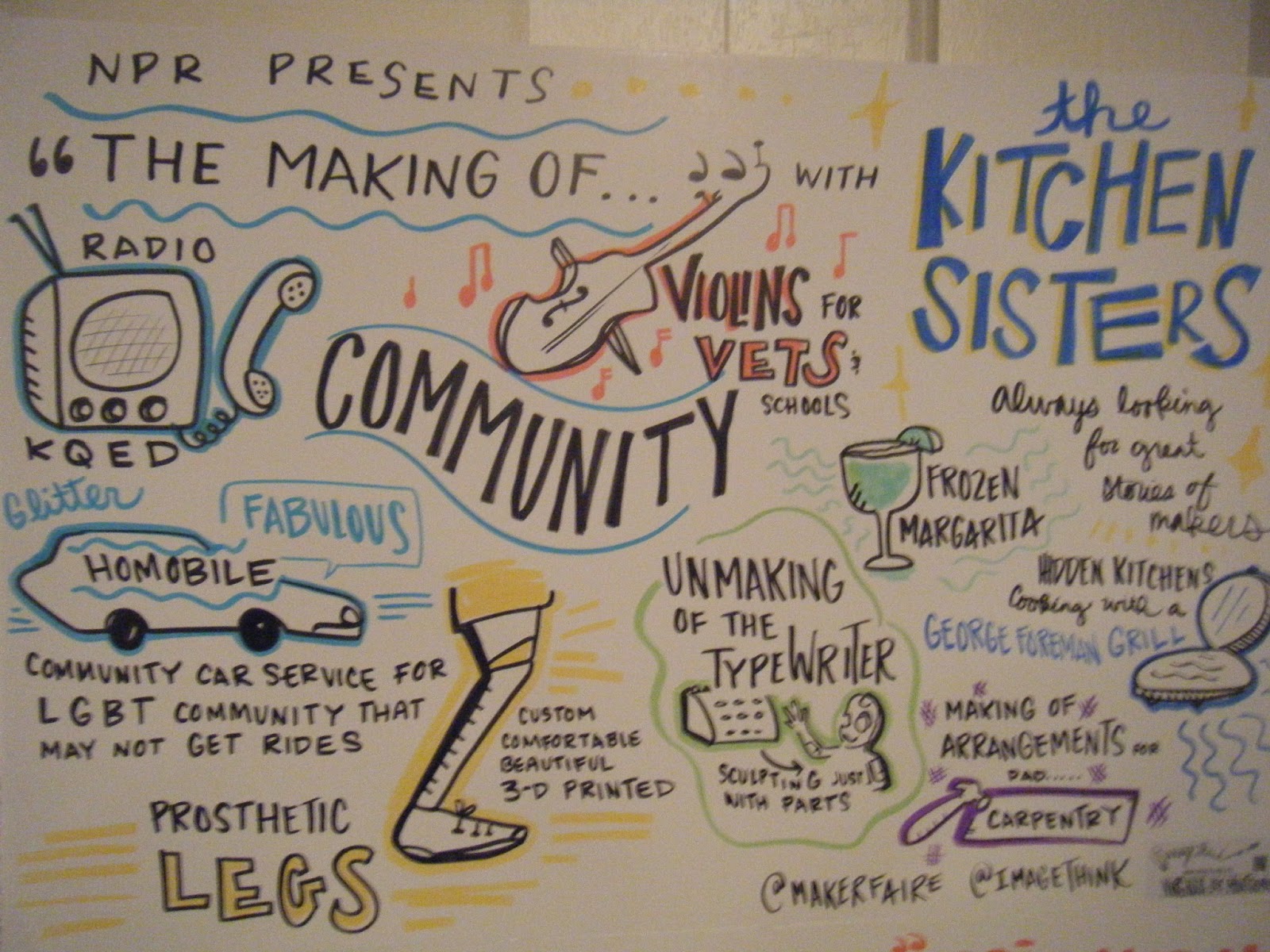 This is one talk I'm glad I did NOT attend.  PBS and NPR have lots of good programming but sometimes they showcase some naive people doing ineffective things.  One case in point is the Violins for Veterans idea noted on the card above.  I heard about that giveaway from my friends in the San Francisco veterans' community.  It was a disaster.  First of all, the veterans never asked for the violins in the first place.  Hardly any of them have ever even learned music, let alone this instrument.  When some destitute veterans found out they could pawn their donated violins for cash, that's exactly what they did.  Well-meaning people need to do some market research before they launch a giveaway program.  Veterans need stable employment before they can afford the luxury of learning a musical instrument. 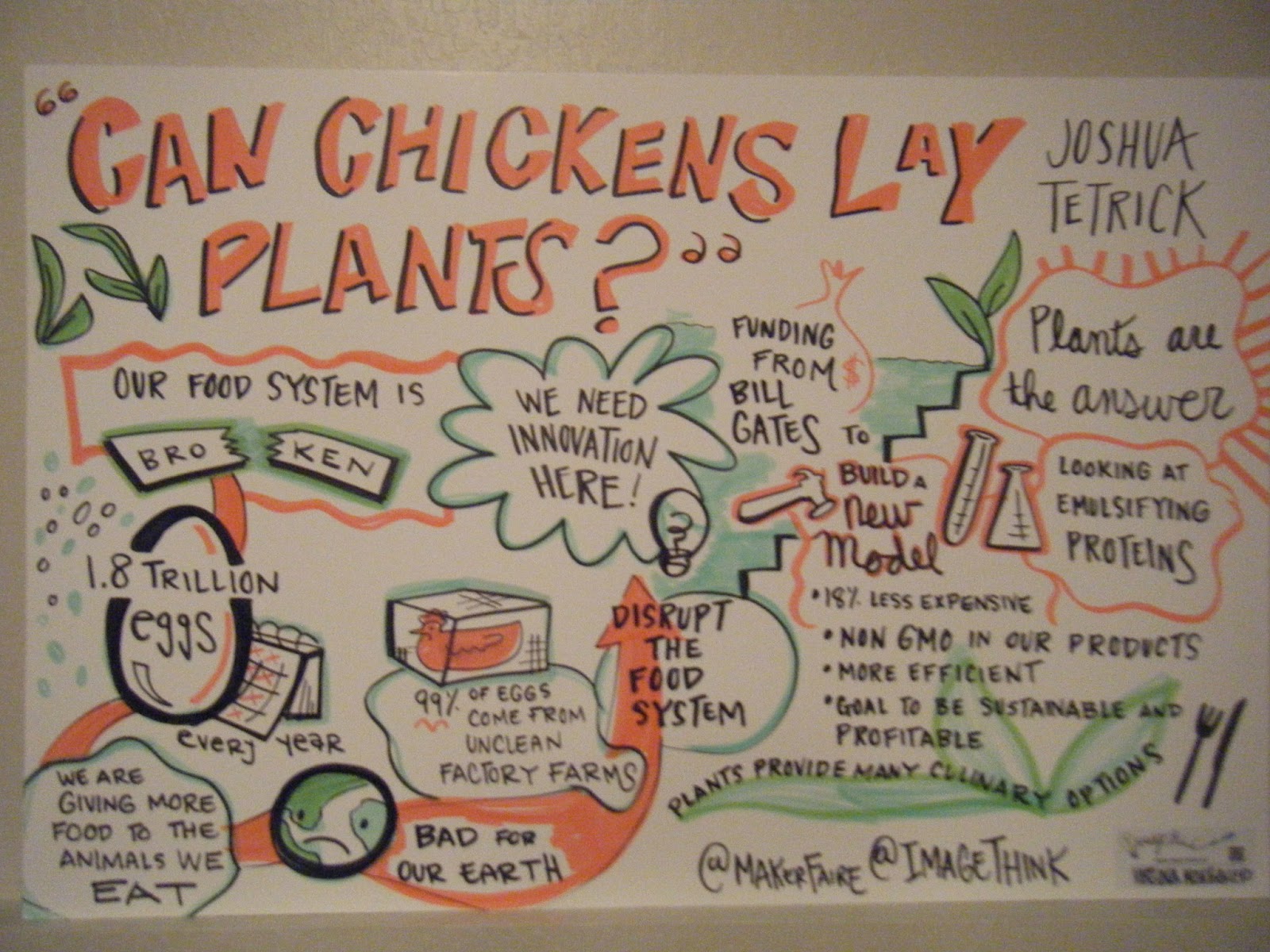 This is a talk I wish I had attended.  Chickens popping out plants sounds like something out of science fiction but serious scientists and philanthropists are working on it.  Would you like some arugula in your omelette?  No problem, just crack open an egg that comes pre-loaded. 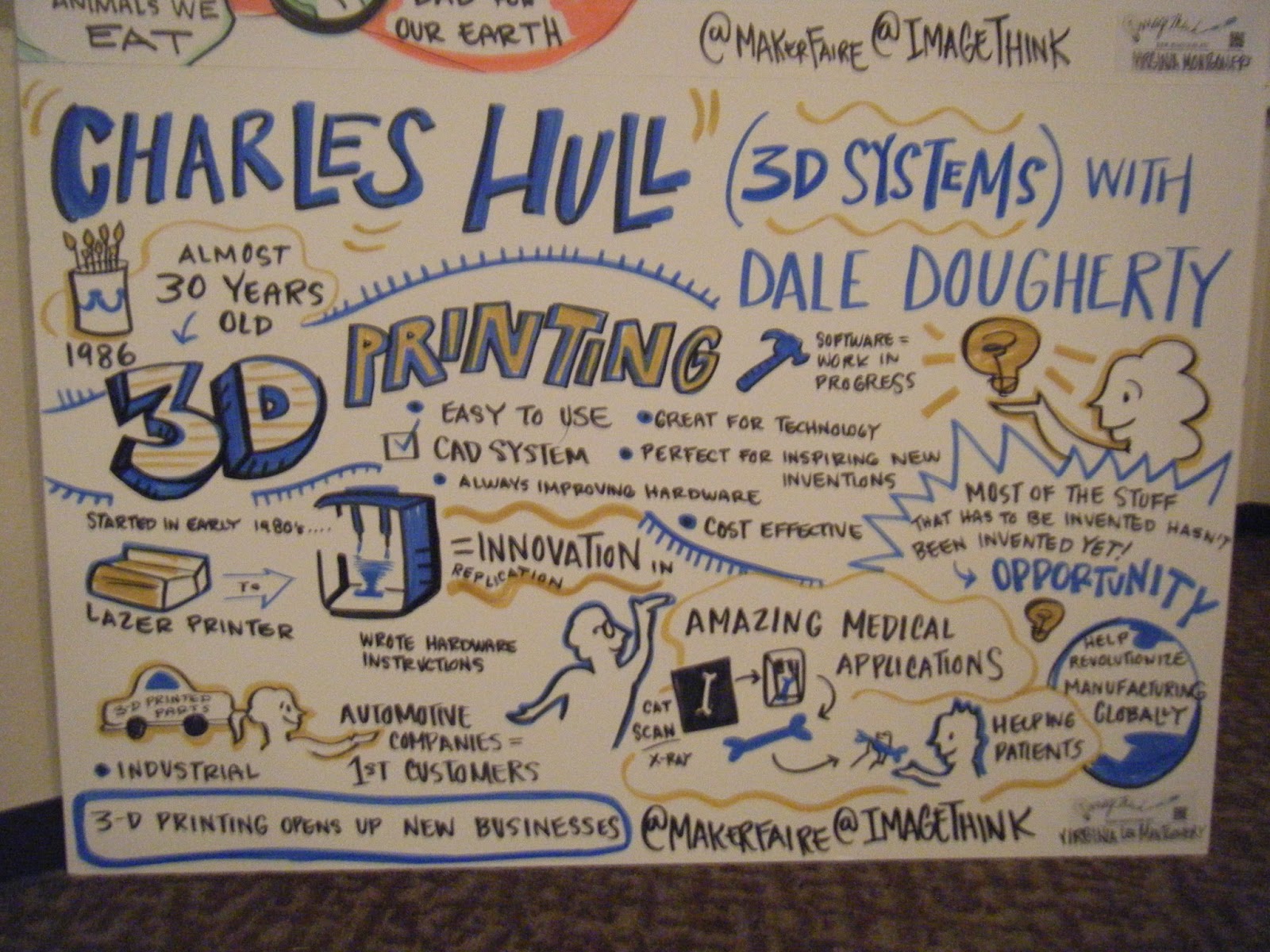 This was probably the most unique talk of the entire faire.  The founder of the Maker Faire, Dale Dougherty, interviewed Charles Hull, founder of 3D Systems.  3D printing has been around for three decades and evolved from stereolithography.  There are only two big manufacturers of heavy-duty 3D printing devices.  If I were running one of those two big players, I'd have my corporate development team scouring the expo floor for new product ideas.  Real business gets done at the Maker Faire, in many ways. 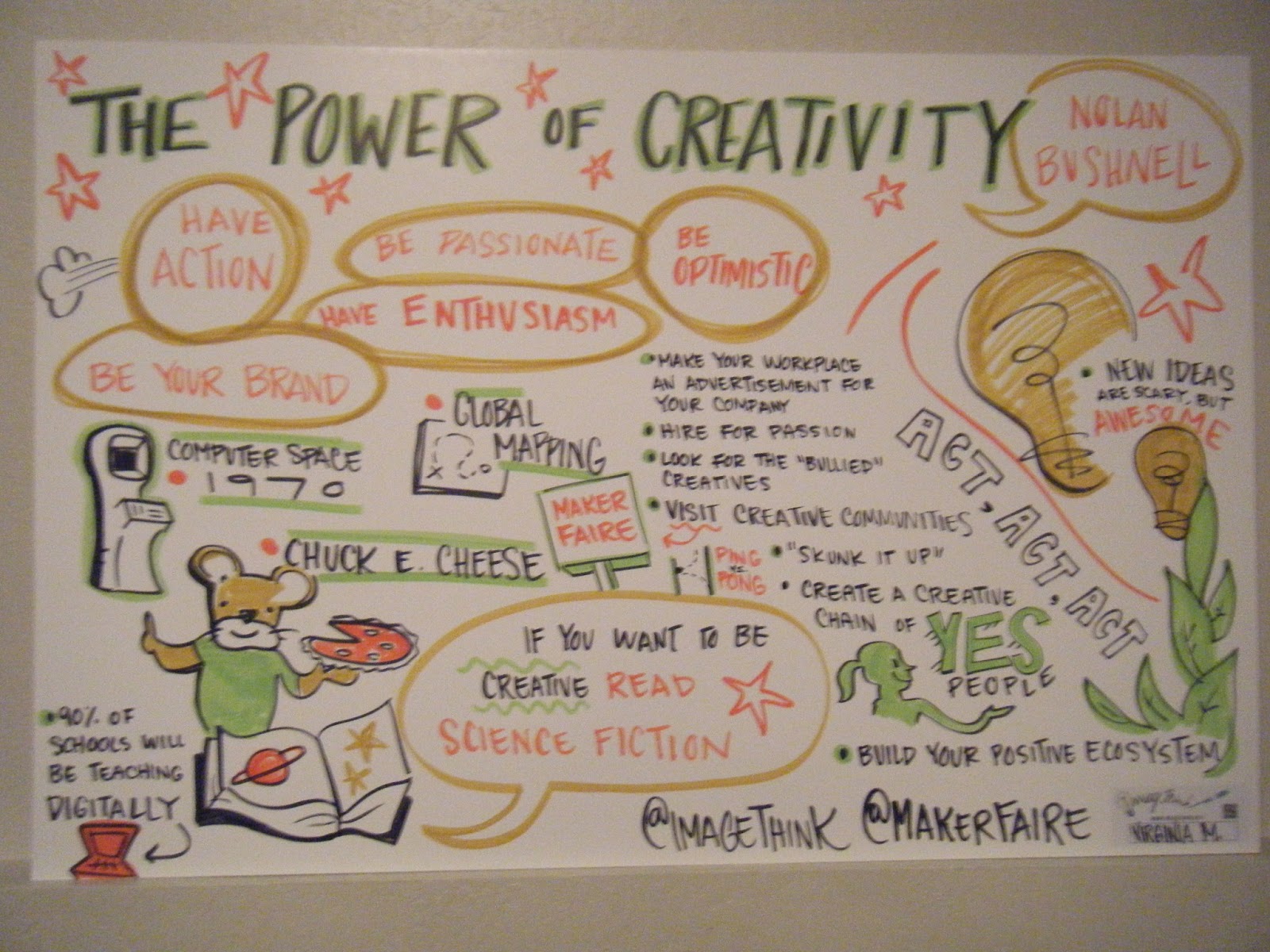 I had the distinct privilege of hearing Nolan Bushnell, founder of Atari, describe the reasons he hired Steve Jobs before the world knew about Steve Jobs.  You can watch the video on FORA.  He said there were probably another twenty Steve Jobs in the room with him.  He had no idea that I'm one of them.  His criteria for hiring and team building were truly radical and that's why most Fortune 500 HR departments will never adopt them.  Large employers are more worried about liability from failure than success from creativity, so let's leave radical hiring to entrepreneurs.  His point about hiring people who've been bullied is intriguing.  Mr. Bushnell argues that bullied people tend to be creative.  Maybe the harsh reality of human behavior prompts them to escape into fantasy realms where they can find comfort and success.  Think about the stereotypical people who attend comic book shows, sci-fi conventions, Burning Man, and even Maker Faire.  They're the oddballs who don't fit in.  More power to them. 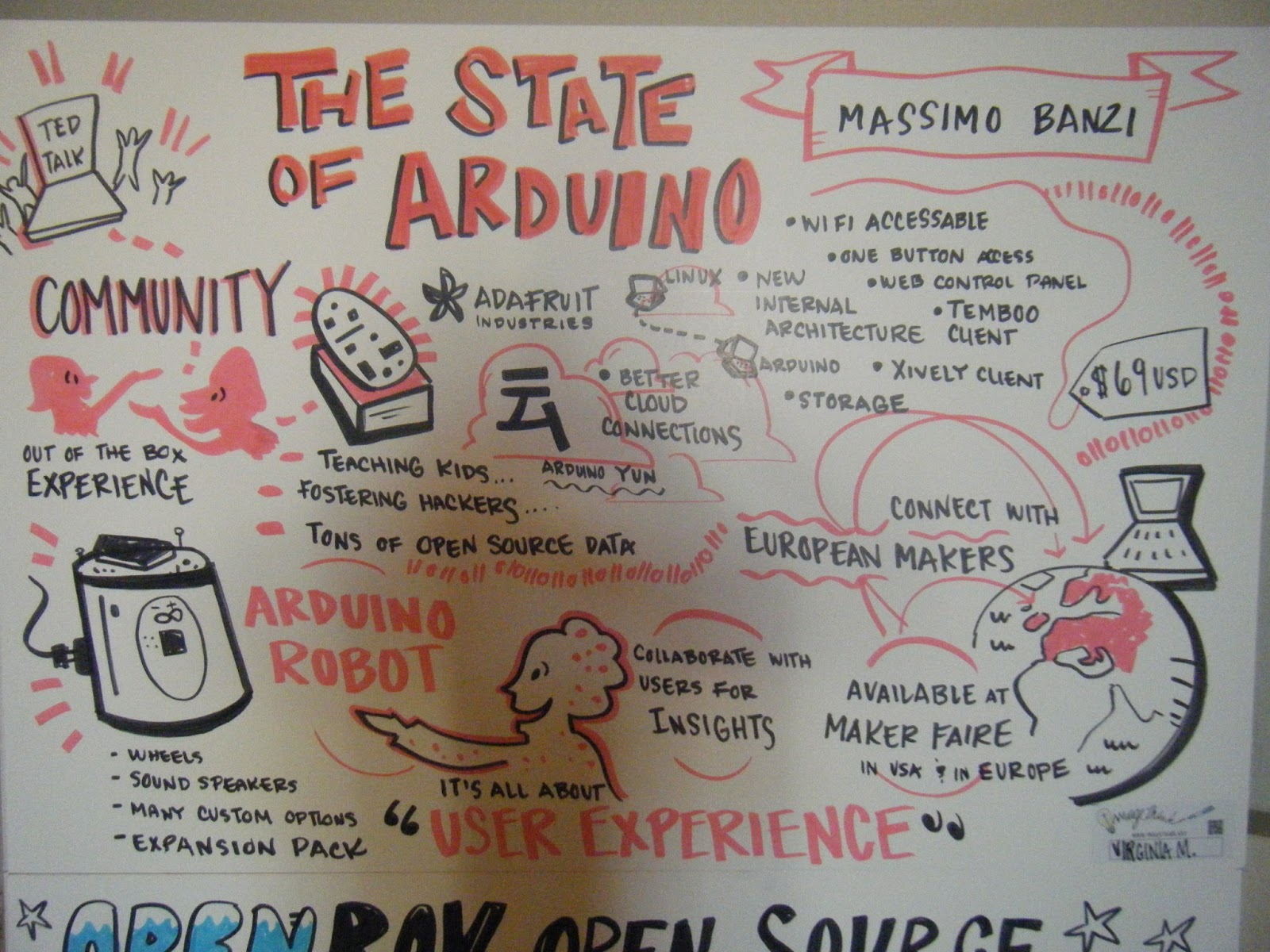 I wish I had attended this talk.  Arduino is an open-source electronics standard that was all over the Maker Faire expo floor.  One theme among several other platform speakers scattered around the expo floor's stages is that there's tremendous room for innovation in small-scale hardware and software, probably more so in software.  Makezine has tons of Arduino tutorials for amateur users who want to make their own control systems. 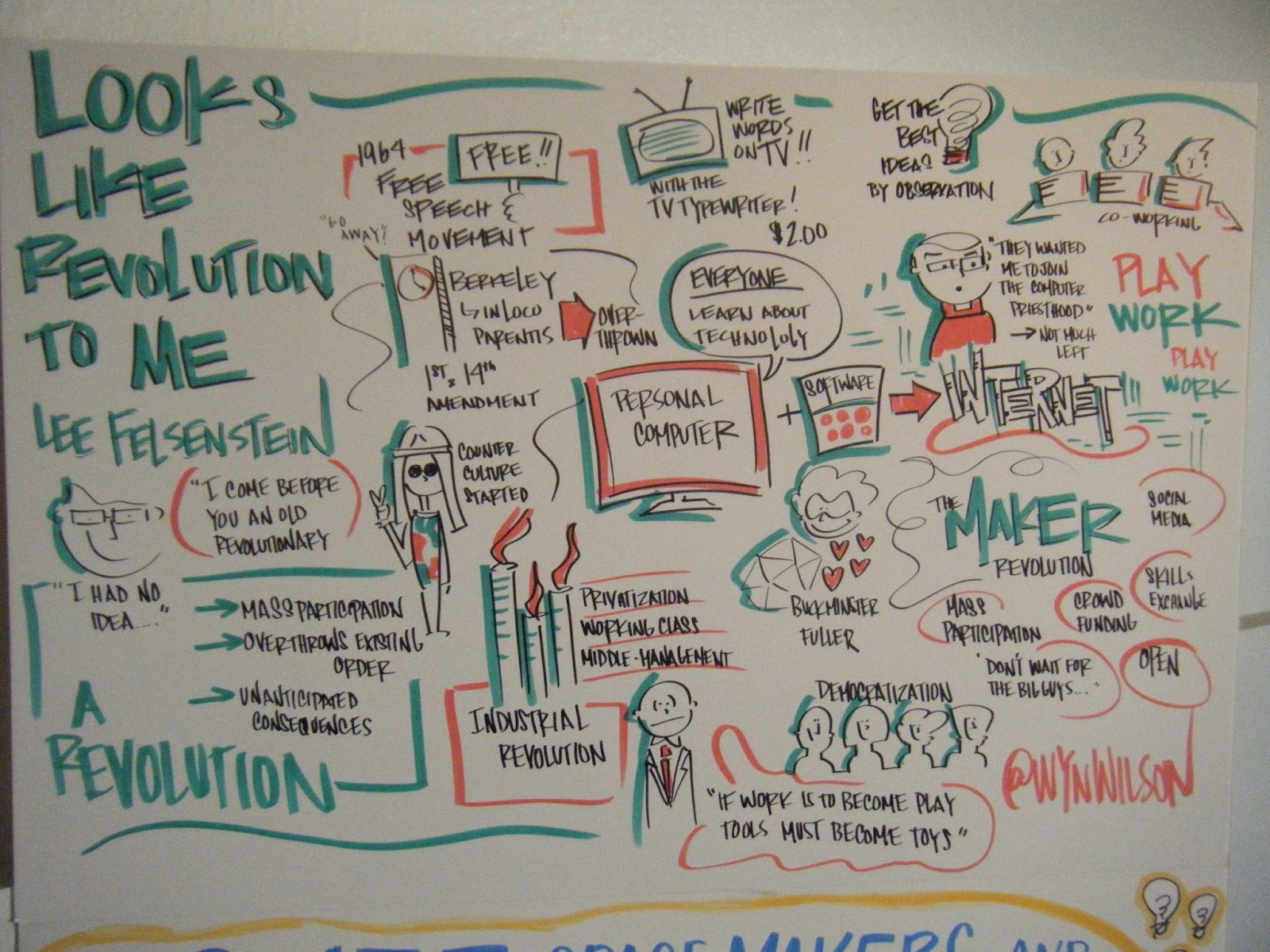 I missed this talk but it sure looks like a revolution from where I'm sitting.  No one knows where any of this is going and that's great.  Where it all goes is up to you, reader.

The expo floor was geek heaven with something for everyone.  I saw some practical uses for concepts I've only heard about in talks.  Mechatronics designers were showcasing their applications.  A lot of mechatronics borrowed heavily from traditional robotics but the field cries out for more than a hobbyist perspective.  I think combining autonomous mechatronics robots with Arduino-based SCADA devices will enable an armada of reprogrammable arrays.  I can think of some military applications, but I won't discuss them here.

Fleets of devices and control nodes are giving rise to ubiquitous computing (UBICOMP) and the Internet of things (IOT).  Those autonomous devices will be linked via UBICOMP/IOT to clouds full of Big Data audit trails that can be mined for patterns and behavioral preferences.  The Brave New World of all-encompassing  monitoring kind of snuck up on civilization without any notice or popular debate.  There's no going back.

I noticed flyers for SupplyBetter, a comparison shopping portal that brings 3D printing into a customer's logistics chain.  I've been involved in logistics for two decades and the movement toward outsourcing of third-party logistics services was settled years ago.  The customization of logistics is the next step.

The maker movement isn't just about mechanical devices and computer software.  Biohacking is another vector in the movement and a small number of practitioners are working on biological innovation under the radar.  I won't mention the connections and ideas I discovered here because I need to use them to launch something proprietary in stealth mode.  I'll just have to say that splicing genes isn't just for big labs anymore.

The expo floor wasn't the only place where I acquired wisdom applicable to biology.  The homegrown movement had a whole barn to themselves, with talks for aspiring micro-farmers.  The UC Master Gardener Program was there and they're looking for volunteer participants.  I think they could benefit from experts in aquaponics and permaculture.

There were tons of hot women at Maker Faire.  The steampunk chicks were not always my type but some were cute.  I was particularly pleased to see lots of attractive women manning the exhibit booths in the main expo hall.  STEM chicks are hot and I'm really fond of nerdy women.  I was disappointed that they weren't all over me but I can understand that they needed to stay focused on their faire duties.  I find women who combine intelligence and creativity to be irresistable, especially on a hot summer day in the Bay Area when they're wearing tank tops and cutoff shorts.

Maker Faire was totally awesome. I've been looking for something like this all of my life.  I will definitely return next year.

Full disclosure:  No positions in any companies mentioned.

Addendum:  The company that performed the graphic recording at the Center Stage is ImageThink in New York City.  They do great work at many events.  All of their graphic art from Maker Faire Bay Area 2013 is displayed on their Facebook page.
Created by Anthony Alfidi at 5/20/2013 09:06:00 PM