I attended another Silicon Valley conference last week, just for kicks. This one was the K-TECH K-Global Silicon Valley 2015. I don't think I'll ever tire of the non-stop innovation merry-go-round of conferences, trade shows, lectures, pitch sessions, and other stuff. One theme from last week's event was the "open source" movement in several tech fields. I absorbed a great deal of what the featured speakers said because I'm like a sponge. Prepare yourselves for a blast of my genius thinking on how it's coming straight to you. 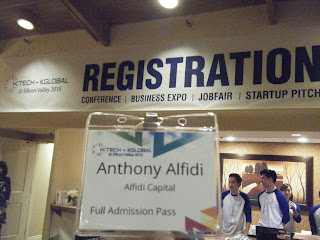 Every multinational corporation that makes anything electro-mechanical is gearing up to market connected living and the Internet of Things. All devices requiring remote power management will have really cool marketing campaigns. Crowdfunding can deliver tiny things that VC funding cannot build. The ugliest things in your neighborhood, like above-ground utility poles and traffic lights, will become exploitable IoT sensor platforms.

Minimally educated non-experts can now program robots to perform complex tasks by moving their armatures around. Mobile phones have reduced computation costs to do more things on chip space, enabling advanced robotics. Robots are coming to your senior citizens' assisted living facilities because the West's demographics are increasing the number of retirees per active worker. Vision sensors developed for gaming will make robots more capable. Open source standards like the Robot Operating System (ROS) make enabling software easier to develop. One dude at last week's conference mis-identified the Unified Robot Description Format (URDF), making me wonder which of his assistants needs corrective training on due diligence.

Robot as a Service (RaaS) is a cute term for hospitality or other service sectors leasing outsourced robot servants. I expect autonomous cars to be part of this category. Programmed drones and cars eliminate operator error. Humans will build trust with these things by experience. Instances like "mobile moments" will need another definition like "autonomous moments" that include the short engagement spaces where humans interact with autonomous things for the first time.

The Open Source Robotics Foundation (OSRF) is right here in the SF Bay Area. I predict OSRF will be as ubiquitous as GitHub and Wikipedia once the automation revolution takes off in our personal lives. IoT devices need APIs and PKIs to interact with networks and cloud platforms. Drones, medical devices, and 3D printing will bring new headaches for tech companies' Chief Data Officers and Chief Privacy Officers. Those things must also tap into IoT APIs and PKIs. I checked for National Institute of Standards and Technology (NIST) standards covering drones, robots, and other automated IoT things. The NIST search box revealed many preexisting standards for related subjects in manufacturing, design, and programming. The next-gen standards will have to come from places like OSRF pushing NIST to catch up.

We will all need something to do once automation makes our jobs redundant. Basic income guarantees aren't enough without something to occupy our idle time. Video games and creative stuff are primed for an explosion. Social cohesion may explode too. Elites have not prepared memes for the population to adopt in a jobless future. Thought leaders like me will work overtime to sell the good news of open source automation.

Full disclosure: I did not talk to any South Koreans who attended K-TECH. I was only there to listen to speakers on the first day. I have no business interests in South Korea or with South Korean citizens at all. The last time I was in South Korea was January 2000 while performing US military duties.
Created by Anthony Alfidi at 11/17/2015 09:38:00 PM