I attended the "Reimagining Cable" presentation last week at the CableLabs Silicon Valley office, sponsored by HVCK. Mobile enthusiasts say cable broadcasting is going the way of the dinosaur. Well, Silicon Valley's innovators have something to say about that. CableLabs pushes the industry into a new digital era. I sat down to watch the new era take shape after some snacks. Our hosts gave me an awesome adhesive visitor badge. 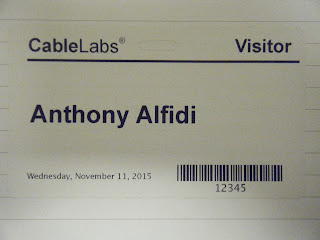 The assembled startups presented their stories. I won't name them or retell their stories because I would rather share my impressions. Personal video profiles are a cool addition to social media channels. The competition in video profiling is exploding because there is little barrier to entry other than the first-mover advantage of licensing a video standard to one of the leading social media platforms. Video production that competes directly with YouTube and Vine needs some compelling advantage in editing or animation. Synchronous remote video viewing and interaction may actually be less convenient than social media sharing because it requires friends to watch something live together. The best social media experiences are shared to allow the convenience of watching video anytime rather than synchronously with other people. Some shared video experience may be useful as a bridge of high-speed and low-speed streaming if it is sufficiently distinct from Periscope or other chat sharing portals.

I tried to see into the future based on what techies were portraying at CableLabs. IMHO live video sharing will only reach viable mass markets in two verticals: enterprise video teleconference (VTC) and adult entertainment. That's really it unless use cases confirm that groups of people will stop whatever they're doing to chat on video at a moment's notice. Snapchat's billions of videos served are good market proof that TV viewers now watch more video of each other than of traditional productions. I would still like to see deeper metrics on total hours watched and numbers of videos watched to completion instead of just video upload totals. An upload does not always get watched, and it rarely goes viral.

Some ideas still need new tech, while other new ideas compete with tech that's already available. Multiple streams requires much more bandwidth stressing 4G's real-time streaming ability. Multi-second lags will degrade viewing quality. Engineers must design new compression methods allowing real-time multi-streams with no lags on mobile devices. I have already witnessed eyeball-tracking video tech startups that demo'd at other events and got VC attention. That train has already left the station. Eyeball-tracking is viable and some players think it will disrupt advertising spending. Maybe 360-degree video will be the next compelling viewer experience if it's immersive.

I grew up on cable TV. Reality shows had not yet taken over programming back in the 1980s. The shows on the high-minded cable channels like Discovery, A+E, and Bravo really had quality before lowbrow programming took over. Cable networks still have enormous bandwidth and content libraries. They just have to move their legacy business model into something that fits mobile platforms. I will live long enough to watch the complete transformation.
Created by Anthony Alfidi at 11/16/2015 08:03:00 PM