Van Halen And Genius In The Music Business

I went to a Van Halen concert for the first time in my life last night when they played the Concord Pavilion on their Tokyo Dome Live in Concert 2015 tour.  They put on a loud, tight show with plenty of flair from all of the players.  I got to relive the 1980s because most of the setlist for this tour was from their earlier albums.  Everyone should have careers they enjoy, and if you follow your bliss then financial rewards will follow you.  Concert fun and business success often go hand in hand. 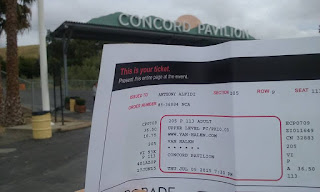 Ignore all of the sniping from this 2015 tour's critics.  There were no rough lead vocals or pre-recorded backing vocals.  Diamond Dave stretched a bit for the high notes he can't reach anymore in his older years but his phrasing and timing were clear enough.  Wolf was in front of his mic, singing and playing in time, and he flawlessly led off the famous bass chords from "Runnin' With The Devil."   Alex's drum solo sounded like Miami Sound Machine gave him some inspiration.  Dave does not have the vocal range of Sammy Hagar or even Gary Cherone, but his stage presence is one of the intangibles that make Van Halen special to fans.  Dave twirls a mic stand like nobody's business and his dancing punctuates Eddie's guitar licks.  These guys put on a professional show.

Some Diamond Dave quotes were instant classics.  Asking the audience "How 'bout that women's soccer team?" was the perfect break during his harmonica intro to "Ice Cream Man."  I wouldn't have used a Bill Cosby joke, but I'm not Dave.  I don't know what "Fifty shades of Dave" means, or whether there's an America Town in China, or whether his description of a long-ago Mexican girlfriend was accurate.  Knowing why would take the fun away.  Whatever tension exists between Dave and Eddie was not visible at all on stage.  Eddie played along with Dave's verbal gags like a classic straight player to an improvisational comic. 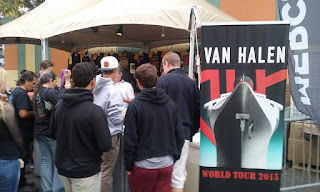 Other professionals were obviously hard at work on the business end of this tour.  The merchandising tent was full and people lined up to spend $20 or more for a $5 T-shirt.  The band's 2012 tour grossed over $54M from ticket sales but I couldn't find a figure for merchandise sales.  The tour revenue averaged over $1M per show that year.  Guitar Player breaks down the album sales from the band's eras under two very different lead singers.  Dave sold more records for the band but Sammy's net worth is much higher, probably due to all of his Cabo Wabo business ventures.  No one seems to be tracking Gary's earnings from Van Halen III; his only album with the band went gold, the lowest US certification of any album in Van Halen's discography. 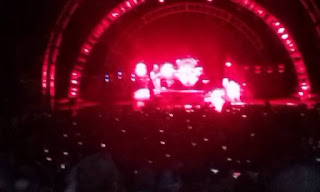 The blurry photo above is the band on stage.  Trust me, it's them.  If the spirit moves you, well, you move.  I was moving along to the beat the whole night, raising my fist with the "hey hey hey" chorus of "Ain't Talkin' 'Bout Love" and everything.  Other people could have jumped around the aisle during "Dance The Night Away" but the seats on either side of me were empty.  I have high standards, and I'm not jumping around a Van Halen concert even though most of the people in attendance did that at some point in their lives.  Oh BTW, I only date drug-free intellectual babes. 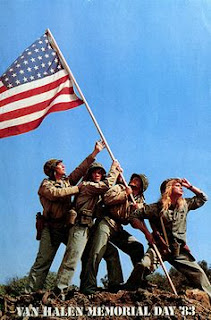 The first Van Halen item I ever purchased wasn't even their music.  I bought a replica of the poster above during junior high school in 1988 because it just looked so freaking cool.  I think the poster was designed for their appearance at the 1983 US Festival.  I recall seeing a recording of the US Festival once.  One thing from the recording still rings clear as a bell in my memory.  The chords that became the riff for "Top of the World" on 1991's For Unlawful Carnal Knowledge were audible during the closing chorus for "Dance the Night Away" in that 1983 show.  Eddie played those "Top of the World" riffs during the closing of "Jump" in last night's Concord concert.  He obviously loves the way it sounds and I wonder if he regrets not performing any songs from the Sammy era live while touring with Dave.  I still have that 1983 poster rolled up in my closet.  I feel on top of the world whenever I look at it because it's just so darn patriotic.  It is still freaking cool after all these years and I'll hang it up when I'm ready.

Van Halen's body of work remains compelling after four decades because its principal artists are true virtuosos.  Wolf is still growing musically but he's coming along fine by all indications.  He is making his dad very proud.  Dave, Alex, and especially Eddie have always been excellent performers.  Some people are just gifted, and wasting natural talent is a crime against nature.  Whenever something in business bugs me to the point of exasperation, I think about songs like "Dance the Night Away," "Panama," "Jump," "Dreams," and "Top of the World" to remember that chaos gives birth to a dancing star (paraphrasing Friedrich Nietzsche).  I am supposed to be a financial virtuoso.  Whatever chaos Dave and Eddie use to create their most memorable songs is something I can tap into myself.  It is simply impossible to be sad or angry when you're standing on top of the world, dreaming of jumping all the way to Panama so you can dance the night away.  Great music makes you want to do just that every time you hear it.

Van Halen takes forever to put out new music now that their founding members are all age 60 or over.  I could not shake the suspicion that this tour for their only live album with Dave could be their swan song.  I am very grateful to have seen them just this once if this turns out to be the first and last time I can witness their creative genius in person.  The mark of genius is to make a difficult task look easy.  Dave and Eddie make rock music look so easy that every amateur in the audience imagined themselves in the music right along with them.  The gross revenue from my one concert ticket won't make the band much richer but it should be enough for each Van Halen member to buy a sandwich if they're so inclined.  Have lunch on me, guys.  You earned it.
Created by Anthony Alfidi at 7/10/2015 10:38:00 PM