I attended Intersolar North America and SEMICON West once again.  These shows are shaping up to be my favorite mega conference every year and they delivered the goods in 2015.  Other meetings took me away from some of the symposia but I had the main events covered.

The Intersolar Opening Ceremony only had one politician this year.  The local politicos couldn't make it so a New York state legislator talked about the Empire State's energy programs.  No one can touch California, folks, so I don't know why these other states even try.  They may as well just throw in the towel.  I was shocked to hear one of the lead presenters state that multi-junction solar cells are now getting 46% conversion rates.  That is about three times the long-term historical sunlight conversion rate that PV panels typically yielded for decades.  Solar's levelized cost of electricity (LCOE) is also getting more competitive.  In case anyone is curious, EIA describes LCOE for 2015 and NREL provides an LCOE calculator. 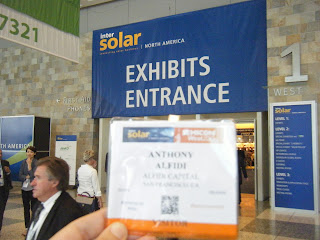 Tesla Motors' CTO and co-founder tied the Gigafactory's Li-ion battery tech to the pending launch of Tesla Energy.  I believe cheap lithium producers will have a major advantage if materials costs truly have the storage sector concerned.  Tesla's full rollout targets both home storage for Tesla car owners and microgrid buildouts for demand clusters in emerging markets.  One big concern among Opening Ceremony attendees like CALSEIA is the continuance of pro-solar policies like net metering, the federal solar investment tax credit (ITC), and Renewable Portfolio Standards (RPS).  Absorbing all that urgency was enough to give me an appetite for the free food at the Opening Ceremony's reception.  I always get my fill of grilled turkey and vegetables.

SEMICON West held their opening press conference and analysts like yours truly are sure to be there.  I grabbed my coffee and listened to SEMI's market outlook.  Gartner and other sector analysts are lowering their revenue forecasts for the semiconductor industry.  I noted how a weaker euro and yen are reducing billings reported in US dollars.  SEMI is still forecasting decent growth in both material cycles and equipment. 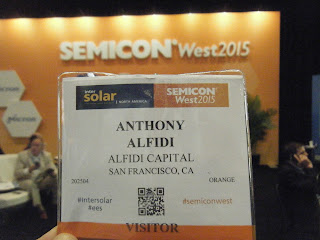 The SEMICON keynote on sub-14nm manufacturing was pretty technical but I tried to follow it for investment insights.  Physics allows innovation to march on and fixing bugs always means lots of manual work.  I am not clear on the relationship between lower voltage and higher efficiency, especially if huge efficiency improvements are needed to get HPC capabilities into smaller form factors.  I am much more clear on the need for databases to communicate in the same language.

The session on EES storage and large-scale grid integration reminded me of something I probably forgot from a previous Intersolar, namely that batteries are less efficient in high-temperature climates.  Li-ion batteries have high efficiency and will charge for a large number of cycles, but they also have a higher cost per kWh than other storage technologies.  They also have a safety disadvantage of "thermal runaway" if overcharged or crushed.  The CAISO duck curve and NREL volatility chart show how storage adds to the capacity of PV systems.  Feel free to look those up yourselves, as I suspect their URLs will change. 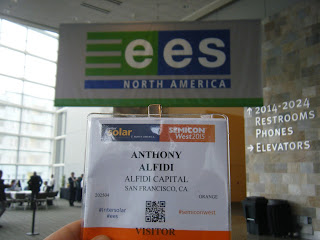 I went over to SEMICON's Silicon Innovation Forum (SIF) investor panel to learn that the National Science Foundation's (NSF) Industrial Innovation and Partnerships (IIP) office has SBIR funds available for startups.  The investors had major takeaways for those of us who track these things.  Corporate VCs have discovered they must provide more capital to semicon startups that need cleanroom work or data development.  Huge capital requirements for new ventures will eventually deter startups from entering semicon.  VCs' recent focus on unicorns further deters interest in startups that can more reliably deliver smaller returns for strategic investors.  The corporate VCs would rather hit lots of singles and doubles than invest in one big successful home run.

GTM Research debuted their white paper on solar and the storage market.  I like conferences that give me free stuff to read.  Less than 0.1% of US solar assets have associated storage capacity, implying there's room for growth.  Okay, I've been hearing about storage's huge potential for growth for three years now.  It still hasn't grown.  I guess Tesla Energy has its work cut out.  Good luck selling storage with Tesla cars as a total package given Tesla's tiny share of the auto market.  I guess utility incentives will have to drive home storage adoption; EVs can't move the needle until they become much cheaper.  Combined savings in commercial costs over a storage product's lifetime are supposed to greatly exceed the initial investment outlay, but I wonder whether that factors in any periodic maintenance cost or insurance cost for the storage unit.  One big claim for storage is that it should add a revenue stream to a household by feeding excess energy back to the grid for sale.  I will review the sector's numbers to see how that works, and how storage adds value to a solar power purchase agreement (PPA).  I also would like to find out whether solar and storage growth curves differ by regions covered by different independent system operators (ISOs).

The US Commercial Service was on hand to talk trade promotion.  I have heard them talk before in Silicon Valley so I don't think I need to rehash their many services here.  I do expect Congress to eventually reauthorize the Ex-Im Bank, because a big plank of our foreign policy depends on trade finance tied to development in emerging markets.  Using "soft power" wisely means keeping US development commitments to Africa that will counter China's influence.  The US should probably merge its Trade and Development Agency with its International Trade Administration so businesses have one less block to check when planning foreign trade partnerships.  Kudos to the Obama Administration for using StopFakes to support American intellectual property.

One SEMICON keynote from Intel connected IoT to the next 50 years of Moore's Law.  You just have to love corporate sponsorship for a keynote.  I would do it too if I thought it would make me serious money.  Intel is betting that its new module's IoT applications will solve problems in four megatrends:  aging populations, carbon footprints in the environment, urbanization booms, and feeding the planet.  I would tell any semicon startup to study the standards of the Industrial Internet Consortium and the Open Interconnect Consortium to ensure their IoT solutions are compatible with emerging norms.

I missed the SEMICON "Bulls and Bears" panel due to a schedule conflict, which is unfortunate because other financial firms track the semicon sector more closely than me.  I will have to study the sector's capex, inventory, capacity utilization, supply chain, and technical challenges on my own.

The Joint Forces for Solar forum is always the highlight of Intersolar for me.  The New York state politician was at it again, making good points about his state's energy market.  I like the idea of a state Green Bank, and I wonder whether some of the state's models will work elsewhere.  The California PV market review was more relevant to my interests.  Rate differentials for high-end and low-end users will get more complex with the addition of a Super User Electricity (SUE) surcharge as a third rate tier.  Net metering will be uncapped and unlimited.  California's RPS goals don't include rooftop solar, which is just too darn bad.  The sector lobby needs to fix that and push for its inclusion.

The final SEMICON SIF keynote was all about transformational innovation and market readiness.  I literally did a "whoa" at the academic speaker dude's career history full of hundreds of patents and scientific articles.  I take geniuses very seriously.  He reminded his audience that there are no shortcuts to building a company and each day brings a "dragon" threat to be slain.  I concur with his endorsement of a "sustainable innovation ecosystem" that successfully engage academics in commercializing their university research.  Academics deserve better royalties and recognition when they do something entrepreneurial.  The decline in US government research spending and the erosion of the US manufacturing base are not coincidences.  I agree with our SIF speaker that US industry has a hard time tapping the leadership skills of government and military leaders if the public sector is isolated from industry.  Well, duh, really?  The finance sector sure kept my military expertise isolated by refusing to hire me and treating me badly.  Anyway, our expert said he expects the electronics industry to consolidate as the end of Moore's Law approaches in a decade, but the coming quantum and optics tech will change the sector's economics all over again.  He also expects entrepreneurs to lead this newly fragmented next-gen industry, with government and university research playing a critical role.  I like that he ended with those optimistic predictions.  I also liked the reception afterwards, with plenty of shrimp kabobs and cheeseburger sliders.

Intersolar and SEMICON West always blow my mind.  I came away this year with plenty of data sources to use when mentoring startups.  I even noted another incubator, the Silicon Catalyst, whose startups will likely need my wisdom.  Startup founders who read the Alfidi Capital Blog have a natural advantage when building businesses in solar energy and semiconductors.  The genius-level knowledge here literally flies off the page.
Created by Anthony Alfidi at 7/31/2015 02:56:00 PM