Every so often, there comes a free event packed with aspiring entrepreneurs, experienced investors, and free refreshments.  It's the kind of event I just can't miss.  Today's playbill included Silicon Valley Entrepreneurs convening "Funded! Global Edition" for the benefit of folks who love the tech sector.  I arrived at the Bespoke co-working space tonight just in time to score free sodas as the event kicked off. 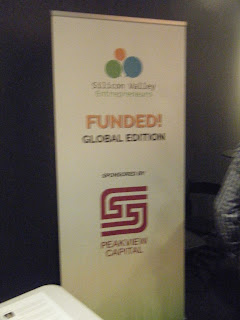 The unicorn hunt never ends.  Venture investors prefer to hunt unicorns in hot growth sectors, which of course fizzle out after every market bubble.  The Uber story started with heavy data analysis of spot transportation demand in several markets.  That's the case for proving how a large business will scale up.

Timing is everything.  I now wonder why health care IT innovation is so hot for startups to disrupt.  I don't think Obamacare is the best explanation because it doesn't control costs very well.  The spillover from cloud adoption may be the main driver pushing IT into health care.

The bubble in tech startup valuations is so obvious.  Any VC warning startup founders not to obsess over valuations is of course doing the right thing.  Warnings from Sand Hill Road are going to sound hypocritical after a while, given the recent rash of late-stage capital injections into unicorns just to pump their valuations. 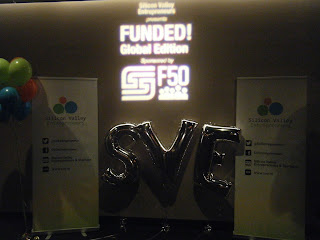 One VC shared a memorable quote:  "A startup's DNA must be global on day one."  It doesn't matter whether DNA is global if the execution doesn't start with a national test market.  App developers in Asia test in South Korea because its demographic homogeneity and universal mobile penetration reveal whether an app can go viral.

Product/founder fit is another buzz term for the common sense principle of building something for a market the founder understands.  Sticking to one's knitting used to be a no-brainer for founders who seriously knew their terrain.  The buzz status of this new term shows how far so many founders now stray from their original expertise.  I am amazed that VCs are apparently funding, or at least noticing, so many startups whose founders develop something they do not truly understand that this mantra now becomes necessary.

One of the featured VC's big success stories was a startup that depended on a low-probability event where every major market leader stumbled.  That's just what happened and the startup was ready to jump.  Only a founder who is sufficiently arrogant and delusional could pull that off.  Yes, that happened too.  When all is said and done, the founders who create brand new gigantic piles of wealth have some unique brain chemistry that makes them see impossible things through to completion.

Early hires must have compatible visions, joined to the startup's vision.  The biochemically unique founder or co-founders will ensure that this happens.  Hires also have complementary skills and can fill gaps in domain expertise.  No one mentioned that someone has to make the coffee but I'm sure that's a valuable skill set early in a startup's life.  Once they scale up to Facebook's size, they can hire administrative assistants to keep the coffee pots full.

Venture capitalists prefer to invest in teams that worked together in the past, or so conventional wisdom goes down in the Valley.  I'm sure it's easier to raise money in the short term when VCs see  familiar faces sitting around the table.  Execution may be different after that first capital raise if some of the old team members do not have the same vision alignment as they did with their past projects.

I did not hear any of the invited expert panelists mention whether founders should draw Venn diagrams of their team's skills.  I heard that insight at Box's developer conference this year and it was a winner.  I also did not hear anyone tonight mention CustDev or other common tools.  People who are serious about building huge tech companies have lots of informal continuing education to complete.

Investors can extract odd perquisites from their startups.  Since when do investors prefer caps on convertible notes?  I really need confirmation from open sources.  Maybe it depends on how much asymmetric power an investor has over a startup that hasn't broken into some hot list.

Any founder who can't see the tech bubble right now is naive, or more likely disingenuous.  I heard more than one founder tonight belittle the possibility of a bubble while experienced venture investors recognized it as the elephant in the room.  The VCs hanging around sounded sanguine compared to some founders.

I cannot confirm whether founders use decision trees to make key decisions after raising capital.  It would definitely help in choosing between spending on new hires or a new marketing campaign.  My MBA training once led me to believe that decision science is common in enterprises.  I am no longer so naive.  Many startups are obviously just winging it when they commit investor capital to something untested.  It is unclear to me whether anyone does any disciplined thinking without specific direction from a mentor (i.e., Sheryl Sandberg at Facebook keeping the young ones in line).  It is much more clear to me that undisciplined startups risk failure when they neglect to map out their options.

Google Developers Launchpad has some special goodies just for startups deploying apps.  I should try it myself once I figure out how to launch my own app.  I have other things ahead of that project in line, so don't hold your breath waiting for me.  I'll let the world know if Google ever takes my idea seriously.

I really wonder whether so-called international investing even applies to the new venture landscape.  I think non-US venture investors have less risk tolerance than we find on Sand Hill Road.  I cannot imagine any US-based VC fund that can launch a startup anywhere other than the US without having a country-specific team of in-house experts just for that one startup.  Bench strength matters because every country has its own regulatory hurdles to navigate no matter what comes out of the WTO or WIPO. 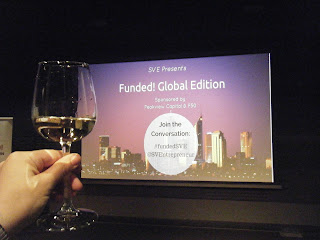 The conference wasn't all work for me.  I got some pizza and a couple of libations courtesy of the sponsors.  Check out the above photo for proof that I enjoy these events.  I had asked a random attendee to photograph me on the speaker platform, but of course she messed it up and got nothing.  I had to do it myself because I wanted it done right.

San Francisco tech action is a nonstop churn of events and expensive deals.  I can't be everywhere but I totally nail the hottest conferences.  The hottest experts at these conferences obviously want me here too.  Bring it on folks, and I'll see you at the next Silicon Valley Entrepreneurs event.
Created by Anthony Alfidi at 6/17/2015 10:51:00 PM