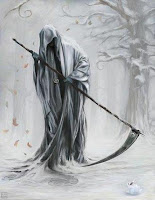 The economic picture is expected to get darker:

Several reports due Wednesday are expected to provide more evidence that consumers are cutting back on spending and companies are eliminating jobs in the face of a deepening recession.

Job, spending, and GDP data are supposedly going to be worse than expected. This means that the picture for those of us who are shorting the markets will get brighter! Yay! What a wonderful Christmas present for me after last month's option misfires. Too bad this French guy didn't wait around to hear the news:

He was a distinguished investor who traced his lineage to the French aristocracy, hobnobbed with members of European high society and sailed around the world on fancy yachts.

But after losing more than $1 billion of his clients' money to Bernard Madoff, Rene-Thierry Magon de la Villehuchet had enough. He locked the door of his Madison Avenue office and apparently swallowed sleeping pills and slashed his wrists with a box cutter, police said.

He would have had a lot less to worry about if he'd been short. Conspiracists will doubtless scour the story for any Masonic imagery appearing at the crime scene. Even people who come from very old money have lost mountains of it in this market.
Created by Anthony Alfidi at 12/23/2008 10:12:00 PM