The Business Of Apps At AppsWorld 2015

Apps World North America held court last week at San Francisco's Moscone Center, and I was in attendance to display my usual flair for original thinking.  The Internet of Things World event happened concurrently but I only had room on my schedule for the first day's apps action.  I'm in demand these days.  Stand by for a blast of Alfidi Capital wisdom. 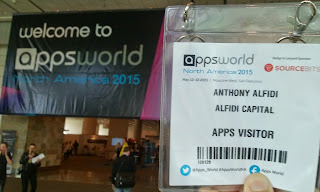 I continue to be impressed that the Customer Development model works for startups.  App developers launching into the Apple and Google app stores really do their CustDev homework.  Apps that don't collect customer data have an advantage in not having to worry about privacy policies or data breaches, but their disadvantage is that they must still collect usage data somehow.  The rise of the app coding, rock star, mercenary hacker owes much to local culture.  Silicon Valley likes to overpay for talent and now programmers think too much of themselves.  Cheap outsourcing may be a shortcut to app development while quality ultimately suffers, at least according to conventional wisdom.  The developer community has every incentive to perpetuate that belief.  Code testing separates the good app developers from the poseurs.  The elegant solution is to make some portion of a coder's pay dependent upon the outcome of independent testing.

Google's sales pitch for monetization included pitches for its other properties.  If I owned a property like YouTube, I would also be a fan of a broadcast channel dedicated to an app's vertical.  I'm sure that's also a great reason to buy Google AdWords campaigns.  Mobile deep linking will be challenging for unskilled developers; standard formats will keep the UX the same across different platforms.  Google's AdMob service will probably corner the market on in-app purchases and native ads.  Google has its eyes on the Web's next growth phase and that means owning the biggest app monetization plan.

Evernote CEO Phil Libin wanted us to mourn the pending death of apps.  His point about content taking priority over architecture resonates with users who don't have to design anything.  Even wearables need some kind of reachback capability into the cloud where all of the architecture and almost all of the data must ultimately reside.  I appreciated Phil's insights that wearables will profoundly shorten session length and multiply use frequency compared to mobile app use, and that screen size on a smartwatch is not the crucial form factor for apps in a wearable world.  I'll quote him:  "UX will replace apps."  He wants us to design experiences for the person, not the device, so handoffs between phone and watch will be seamless.  A single session on multiple devices means marketers expect us to be immersed in our own private clouds every waking minute.  If there's no need for every app feature on every device, some of those devices will do background work that won't require user input.  Think quantified self here, folks, then think about involuntary biofeedback from your smartwatch.  Taking Phil's advice to design for short, frequent sessions measured in session opens the door to invisible apps that work with body's automatic rhythms rather than our conscious minds.  Phil's talk was heavily attended but I wonder if anyone came away with as much to think about as I did from my front-row seat.

All that talk about ubiquitous UX made me think that the real action is still on the back-end.  If developers gravitate to UX the way they currently do to gaming, anyone left who works on the back-end will face little competition and higher compensation.  Outsourcing back-end services carries risk.  Most app builders may not be skilled in supervising third-party providers.  "Storyboarding" is a very important part of app development for some companies.  Big companies tend not to do it while startups tend to break an app's process into different storyboards.  Third-party libraries can be useful sources for code that has universal appeal, especially for security and encryption.

New developers have two more metrics to learn:  cost per install (CPI) and cost per unique user (CPUU).  App Annie shared some developmental wisdom about soft launching to find an app/market fit.  I did not know that test launching in an Asian market has a lower CPI until App Annie said so on stage.  I also did not know that markets with similar development demographics will show comparable LTVs.  Wow, listening to App Annie is better than listening to Gartner.  These developers will need finance types like me to help them model their LTVs if they take App Annie's lessons seriously.  Look before you leap, test the app before you deploy, and model the business before you launch.

I was maxed out on apps after the first day.  Building a business around apps is easier than ever.  The elimination of difficult entry barriers is precisely what makes the app space so attractive, and so crowded.  I believe the game developers at this Apps World will pivot to wearables once they figure out how to make games for those short sessions Phil Libin foresees.  Your smartwatch will play a game with you to get you to take the stairs more often and eat less sugar.  I'll see the devices at some future Apps World but I much prefer to wear my old-fashioned watches.
Created by Anthony Alfidi at 5/22/2015 10:26:00 PM