I've followed Box periodically since I attended their first-ever developers' conference last year.  I had to check what has changed since then at BoxDev 2015.  Check out my awesome badge photo below, and my even more awesome commentary farther down.  I had a front row seat for almost all of the major talks. 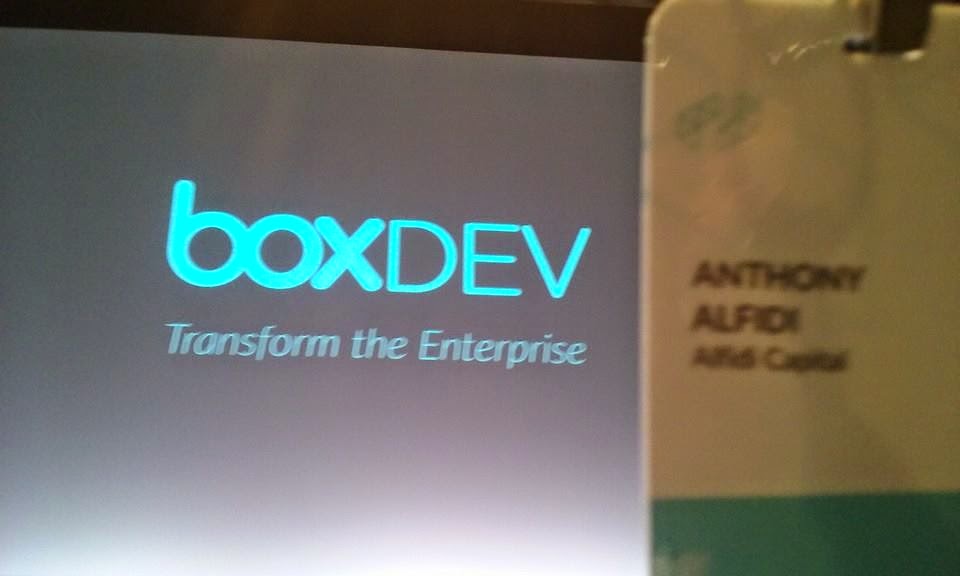 I need to make something really clear right off the bat.  The app Box published specifically for this conference was absolutely atrocious.  The different theme tracks were laid out horizontally for swiping, but the talks that were specific to each track were not lined up chronologically in the vertical view.  I stuck with the Innovate track full of CEOs and other big shots.  The fireside chat with Marc Benioff, for example, was listed way down the page after the closing happy hour.  What's up with that?  A lot of the Innovate talks also lacked detailed descriptions of the participants.  I deleted this app immediately after the conference, but I would have been better off if I had never downloaded it in the first place because it was so useless.

Box executives announced a lot of new products, which I don't use because my enterprise document management needs are very small.  The biggest news from CEO Aaron Levie was their IPO earlier this year (ticker BOX at Yahoo Finance).  A quick look at the stock's progression shows why it got so little attention at BoxDev.  The stock debuted at $22.60 in January and closed at $18.29 on April 22, the day of BoxDev.  It's dropping because Box is still losing money with EPS at -$11.48/share.  This company has been around for a decade and still can't find a profitable niche despite its flashy conferences.  If you leave a cake in an oven for that long, it will probably turn into something resembling a small meteorite.  Do not ever try that yourself.  It's just a thought experiment.

The Innovate talks themselves were much more useful than the app.  Eric Schmidt from Google came out to praise Box for their work with Google Docs.  The latest canard among Silicon Valley tech giants is that their higher standards for encryption are frustrating the US intelligence community's surveillance efforts.  Yeah, right, whatever; the public is really gullible.  Dr. Schmidt is still fond of small businesses as job creators, which is great for those small businesses Google acquires.  I liked his phrasing of IoT as "Instrumentation of Everything."  His insight that small and medium-sized businesses represent and underserved market for affordable enterprise solutions is useful for startup founders trying to enter an established market.  I was privileged to witness firsthand the value of an experienced tech hand mentoring a young striver.  Aaron Levie joked about selling Box software to North Korea, and Dr. Schmidt pulled him back by remarking that most trade with North Korea is illegal due to US government sanctions.  Dr. Schmidt may have learned his own lesson when he visited North Korea in January 2013.  Entrepreneurs should all seek out such a seasoned mentor.

Box set out a pretty ambitious goal of bringing enterprise-level security to apps.  Great for them if they succeed.  One of their developer people praised some app that allows cats to take selfies.  DevOps people may have too much time on their hands.  I was impressed at Box's claim to have a full-time compliance team building compliance guidelines for health care, finance, and other verticals.  I am not that easily impressed, so I may be slowing down as I get older.  It's cool that two prominent VC firms are committing serious money to companies built on the Box platform.  I'll tell my fellow veteran tech entrepreneurs to go chase it.

Marc Benioff came out to share some bromance moments with Aaron Levie.  These dudes kept poking each other on stage.  I was surprised at Marc's admission that he had only recently started meeting CEOs when touring Salesforce's customers in major cities.  I thought a guy like him would go straight to the CEO every time, but he prefers to meet line of business leaders and CIOs.  Marc laid out his three dimensions of great companies:  align with the next tech (cloud, mobile, metadata); shift from subscription revenue to a deferred revenue model; adopt a philanthropic model like Salesforce's 1/1/1 idea.  Box has made its own philanthropic effort a more prominent part of its public story.

I admire Marc's boldness for wanting to build a corporate culture of philanthropy.  All I can say about the corporate do-gooder philosophy is that it should reflect bottom-line business strength.  Salesforce and Box have both had trouble earning profits over the years.  A company can't do any good if it's broke.  I did not know that Salesforce had invested in Box.  That makes this younger company part of Marc's ecosystem.  Marc is big on ecosystem thinking; he discussed how electing a US president brings that person's entire "ecosystem" of supporters into office.

I always pay attention to the VC panels at tech events.  Box's VC people noted that billionaires became angel investors in the '90s dot-com final blowoff phase, and now they're seeing it again.  D'oh!  I think one of the VCs was skeptical of the phrase "VCs are the new NASDAQ" because it implies VCs know something the public markets don't.  I agree with the panelists that this ignores the huge bubble risk today.  I am not as familiar as these VCs with the nuances of driving a company from late-stage private to early-stage public.  Even these VCs are admitting how late-stage private firms are seeing fictional valuations driven by non-VC institutional investors.  Hedge funds need to quit playing games with late-stage finance just to get the pop from an IPO that they're not getting from the rest of their baloney strategies.

The VCs' revelations make me want to get on my soapbox.  Here it comes, people.  When smart, early-stage investors like these start warning the public about what they see, the bubble game in multiple asset classes is in serious trouble.  The easy availability of capital (thanks, Federal Reserve, for nothing) and anomalous late-stage funding events have skewed many founders' expectations.  This easy money environment for high-risk businesses is very unhealthy.  A cohort of the Valley's hottest Generation Y engineers have been spoiled into thinking this bubble is their birthright.  My Gen-X cohorts learned the hard way back in the '90s how this story ends.

The single best panel comment I heard at BoxDev was from the security panel.  Someone said startups should pick their founding team with care when applying to big accelerators like Y Combinator.  The big idea is to map out everyone's skill sets as a Venn diagram to cover as much surface area as possible.  Wow, that is mind-blowing.  I'll have to try that with the next bunch of floundering founders I meet in my favorite accelerator, the Cleantech Open.

The founder panel was almost as enlightening.  One founder said that good advisers spend seed time with their startups to earn their stock options.  The best example offered was one adviser who came in several days a week, for several weeks.  He brought lengthy checklists of things to accomplish and descriptions of jobs the startup hadn't even thought of hiring to fill.  Here comes another key lesson for any potential founder who wants to grow something big.  The single most commonly cited method from this panel for acquiring early customers quickly was the early hire of a sales or business development person who had an extensive, longstanding network within the startup's target vertical.  The next most effective business development tactic was cold calls to CIOs (with LinkedIn as a good source) using an effective one-line pitch hitting pain points in cost and volume.  I am seriously going to make that part of the repertoire I impart to founders who seek my wisdom.  I knew there was a reason I needed to be at BoxDev.

The final Q+A with Aaron Levie showcased his rapid-fire humor and decision making style.  The dude is just irrepressible.  He revealed a brutal daily schedule of handling people tasks in the morning and afternoon, with admin and strategy tasks lasting through the evening.  His typical 16-hour day at the office ends at 2:00AM.  Founders, that's your life for several years when you grow a startup.  Hey Aaron, if you read this, I'm the guy who sneezed in the front row toward the end of your session, and thank you for saying "Bless you."  Common courtesy matters.

BoxDev 2015 was worth the time I spent just for the insights in the three paragraphs immediately above.  Knowing the secrets of early team design, business development, and founder work ethic gives entrepreneurs a big advantage.  Box also had a lot more food trucks on hand this year compared to 2014.  That honey waffle sandwich with fried chicken, egg, and bacon was unforgettable.  BoxDev keeps inviting the right experts; their wisdom is also unforgettable.