The price of oil has fallen by more than half since its 2014 high over $100/barrel.  The crash has been a boon to consumers and sectors heavily dependent on fuel, such as airlines and trucking.  It has not been so kind to developing countries with economies heavily oriented towards natural resource extraction. 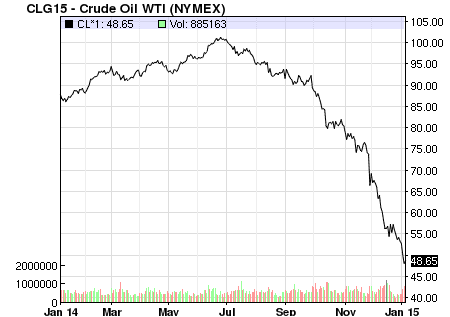 The US is still the world's largest consumer of oil, both in gross volumes and per capita use.  American consumers will be tempted to drive more in advance of their traditional summer driving season with gasoline so cheap.  Trucking companies can afford to fit more less-than-truckload (LTL) cargo configurations into their daily delivery cycles because economizing on fuel is not such a strong concern.  Airlines should be more profitable in 2015 as they will not need to purchase expensive forward contracts that hedge the cost of aviation fuel.

The global supply glut in petroleum means ocean-going shippers can keep their supertanker fleets active.  Time-charter equivalents (TCEs) for shipping contracts should remain strong.  Carriers with weak balance sheets have a rare opportunity to bank some cash and pay down debts they incurred in recent years' shipbuilding booms.

Oil exporters that cannot reduce their production costs are in for a very rough ride.  The oil supply glut is forcing high-cost producers to pump at rates higher than normal just to maintain national revenues.  Russia, Iran, and Venezuela will see their oil-dependent economies significantly hobbled in 2015.  Investors betting on rebounds in those countries' equity markets or currencies will have their patience severely tested.

Institutional investors domiciled in the US may be the most sorely affected by oil's collapse.  Hedge funds and their institutional funders bet heavily on high-yield debt from shale oil explorers and oil field servicing companies.  The Federal Reserve's determination to keep its interest rate target at zero forced yield-hungry funds to take on significantly more risk.  The deteriorating financial positions of US oil sector companies will severely strain their ability to fulfill debt repayment commitments in 2015.  Turning points in the high-yield debt market often presage broader turning points in the bond and stock markets.  Weaker companies collapse as they fail to make debt payments, lay off employees, and abandon their suppliers.  These effects can quickly ripple through the US economy and financially healthy companies will not be immune.

Gasoline demand continues to soften as Europe and other developed world economies enter recession.  The end of oil's drop is nowhere in sight.  A car driver's gain is an energy investor's pain.
Created by Anthony Alfidi at 1/07/2015 09:51:00 PM