Mobile Monday's year-in-review for 2014 and predictions for 2015 was one of those can't-miss San Francisco events.  I trekked over to Adobe HQ on Townsend Street to absorb the night's wisdom.  I've been over there often enough to know that any startups seeking street credibility need to attend those events.  Bear in mind that the observations below are all my own. 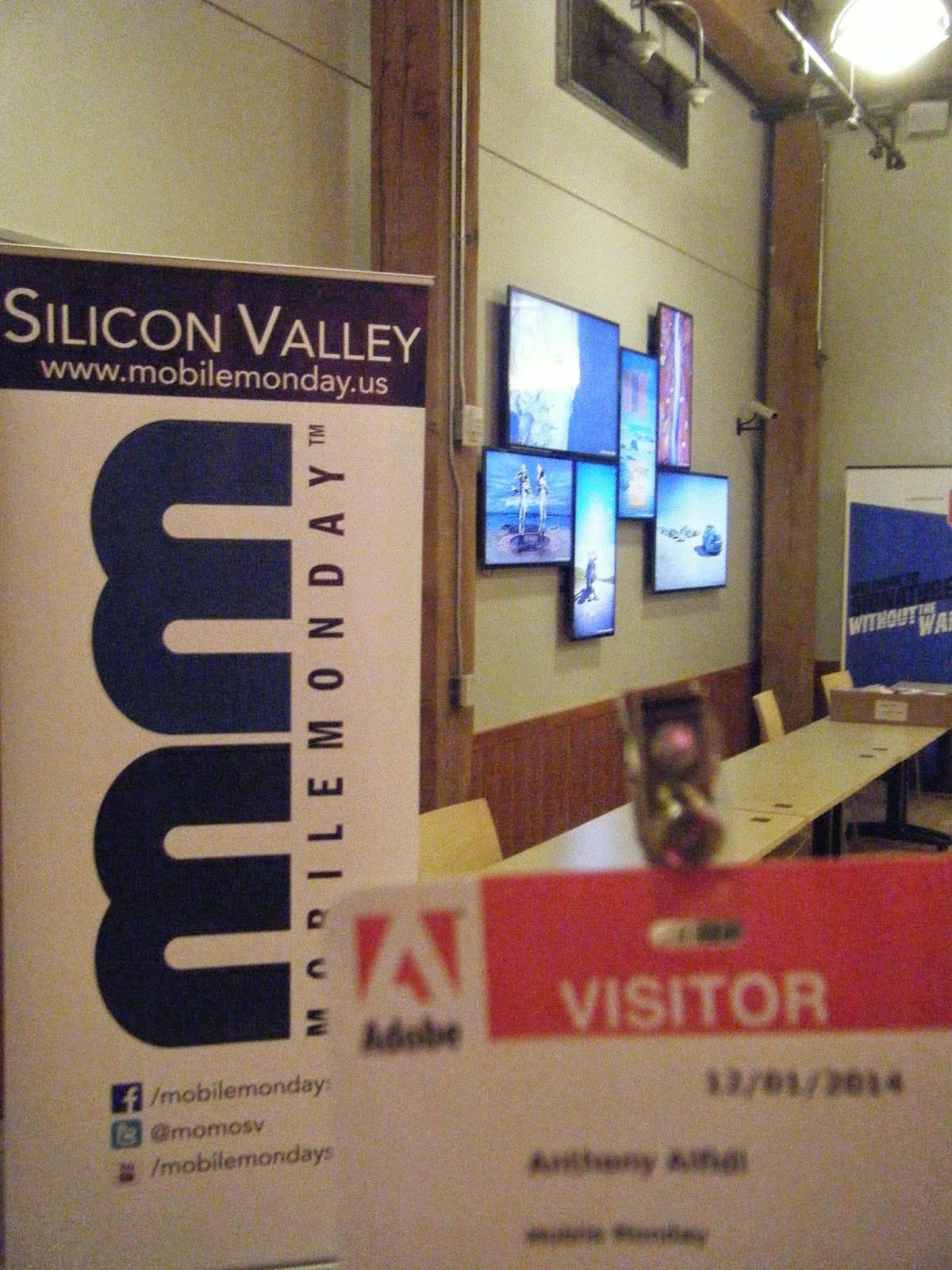 First, allow me to orient my readers to the Adobe gathering place past the front entrance.  Anyone who's ever visited Adobe has seen the employees' creative expressions around their public meeting space.  Sketches adorn the walls and they're much better than your kids' etchings hanging on the fridge.  I guess the Adobe folks are taking classes after hours to add right-brain creativity to their left-brain work.  You might even see something like this unique branding interpretation below. 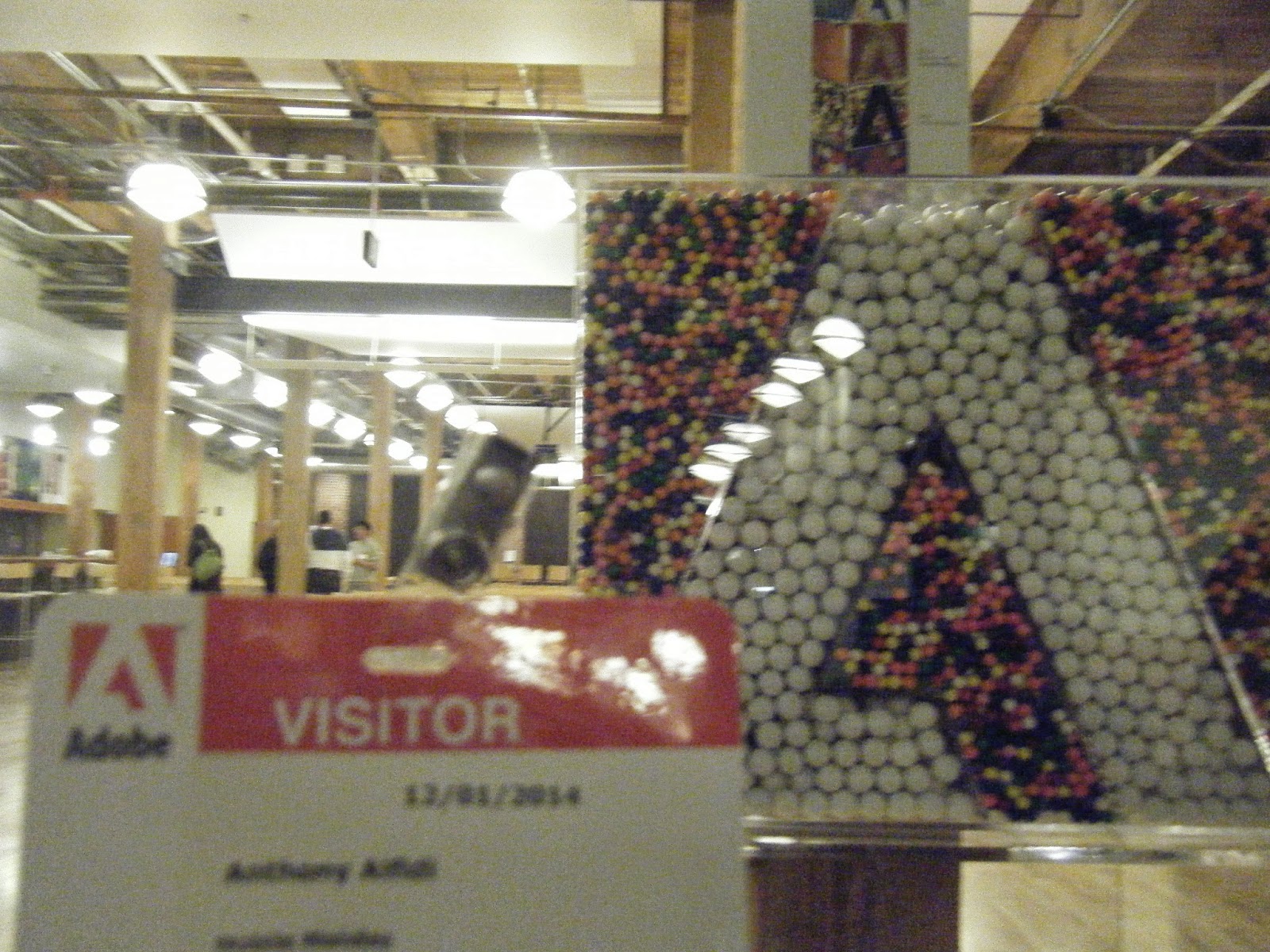 That's a whole bunch of gumballs arranged in a Plexiglas cube resembling the Adobe logo.  It's really cute but the gumballs are not available for consumption.  I thought about adapting the Alfidi Capital logo in this style but I don't have a physically impressive space where I can display it. 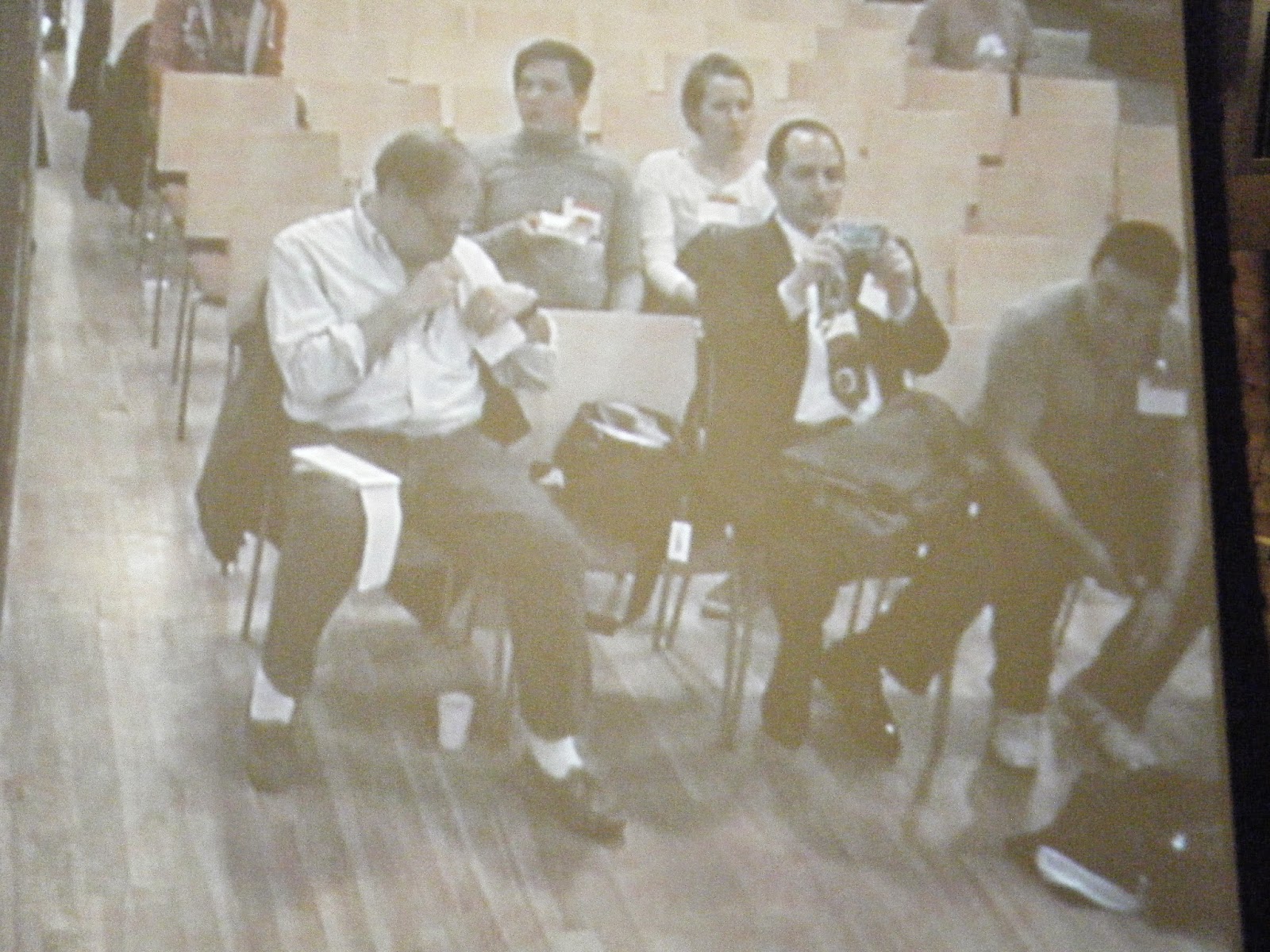 Adobe's meeting space has all of the fun tech gadgets you'd expect, like cameras and projection systems to capture the audience.  That's me taking a selfie of my image on the big, fancy projection screen before it rolled up.  I have no idea what these other people were doing.  I did not come to Mobile Monday for them.

Mario Tapia kicked off the event with his special rendition of a Christmas rhyme, "Twas The Night Before Funding."  I hope he puts it on the Mobile Monday website.  Every startup dreams that their primary investor will be some kind, grandfatherly type pushover like Santa Claus.  That's why it's a fun fairy tale, kids.  Reality is a VC who wants to cram down the founders' stake and push for a premature exit. 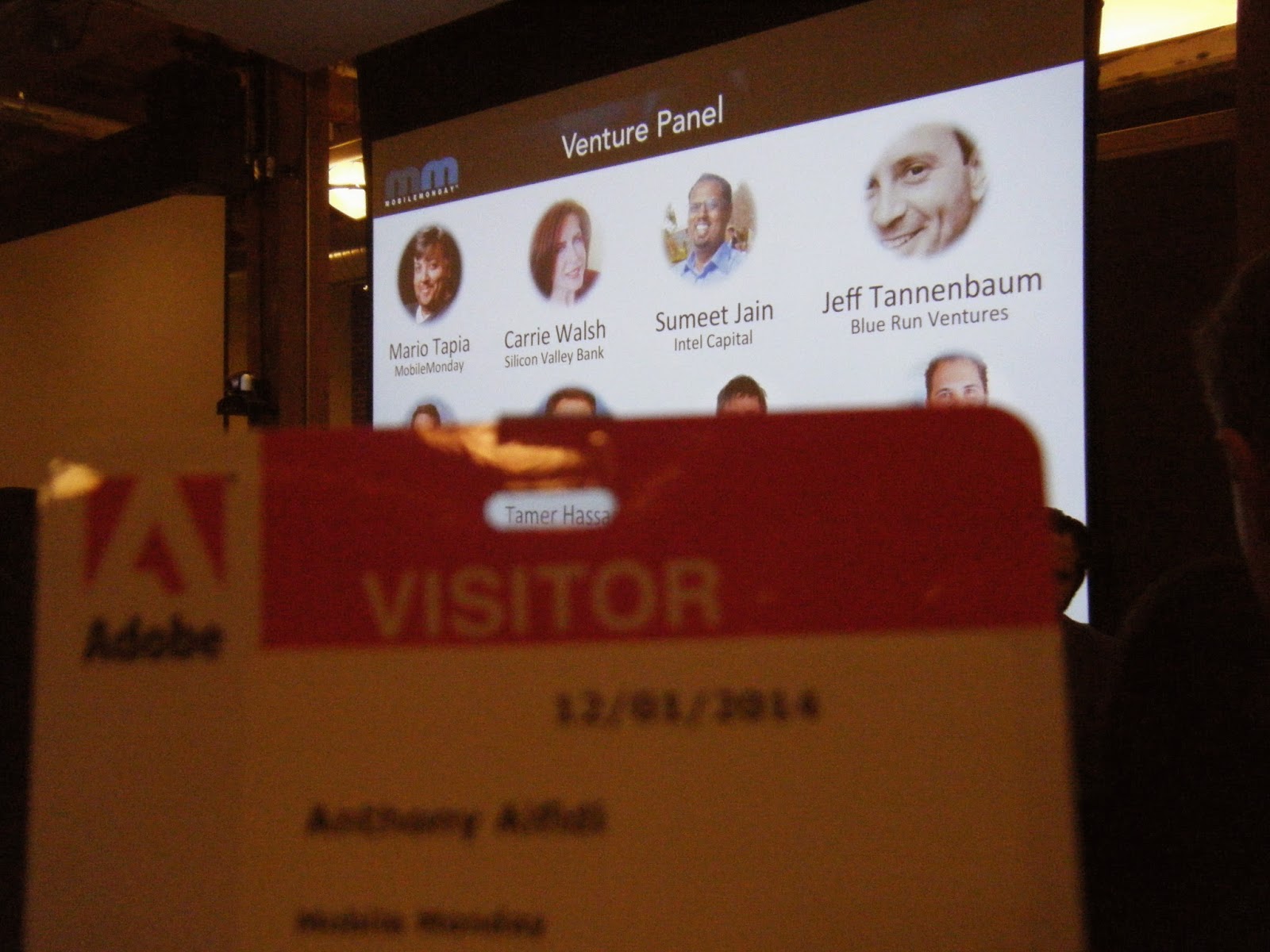 Let's get to the panel already.  I did not write down much of what they said because I was too busy generating my own thoughts, which I shall now share with you out of generosity.  The bubble charts from a tech sector investment bank still projected huge mobile revenue growth even though it means cannibalized growth in other online services.  Mobile subscriptions and advertising are very sensitive to economic downturns, and consumers will do without either in the next recession.  I'm not sure why the panelists think Millennials' preference for smartphones as data carriers means they're less likely to use it as a phone.  Other generations use the devices to make voice calls.  The world does not revolve around Gen-Y people even though the ones in Silicon Valley think it does.  Mobile sector analysts all seem to be Millennials anyway, so their research is becoming self-referential.

Games dominated every bubble chart and quad chart the Mobile Monday panel discussed.  Analysts expecting non-game app categories to overtake games are foolish.  Mobile users' preference for amusement on demand is now so thoroughly ingrained that only other gamified apps can satisfy the craving.  App makers targeting business functions still have not figured out how to incentivize users with playable levels and token rewards, and that's why they won't see growth that displaces games.  The obvious way to jump start growth in any other app category is with gamification.

There may be some growth left in sectors that provide on-demand services specific to locations.  Yes, Uber and Lyft, I mean you.  The mobile sector forgets those companies aren't just mobile apps, but analysts who don't leave their desks much won't understand logistics in the physical world.  Virtual services are a different story.  Lots of sectors don't have enough workers who are mobile enough to justify a device and app for everyone, so traditional seat count metrics for ERP systems still matter.  I can only see mobile "virtual back offices" for SMBs viable only for those businesses with localized services (gardeners, junk haulers, whatever).  The mobile sector is too much in love with itself if it thinks every cubicle dweller is destined to go mobile.

I may be one of the few analysts on Earth who understands what drives M&A in mobile.  It's not corporate development targets or cultural fit.  It's really cheap capital from the Federal Reserve's ZIRP that makes mobile deals look better than than they would without steroid dollars.  The next most important deal driver is the collection of billionaire tech egos who use cheap capital to buy threatening startups.  Really, that's it.  None of the things I learned in my MBA coursework about strategic fit are driving mobile deals.  It will take a severe stock market correction and the removal of the Fed's monetary stimulus to bring old-school methods back to dealmaking.

No way are mobile startups going to keep rocketing from zero to exit in two years.  Stratospheric acquisition prices, especially those measured by price paid per employee in startups with low headcounts, are an unsustainable phenomenon unique to bubble economics.   I'll believe that WhatsApp and others are viable when their acquiring parents' public financial statements show their line item revenue.

The panel's best insight was the difference between acquisition strategies of tech companies run by different generations.  Gen-Y billionaires (Mark Zuckerberg at Facebook) buy messaging startups because that's what Gen-Y uses to communicate.  Gen-X firms like Microsoft and Yahoo buy email startups, but I wonder how entrenched Gen-X culture is at those companies.  Generational difference in corporate management cries out for a Harvard Business Review case study.

I just LOL at VCs endorsing strong encryption.  No way will the NSA allow it.  I expect any US-based startups pushing encryption to be bought out by the big firms that have already agreed to cooperate with the NSA, just to see their tech absorbed.  Non-US startups offering encryption will have a hard time entering the US market, if you know what I mean.

I heard one of the attendees at this event who mentioned Ashley Madison in the same breath as other dating site success stories.  That site caters to adulterers but apparently some people in mobile don't mind.  I will not link it here.  My readers who approve of that site should never read me again.  I take personal integrity very seriously and keeping a marriage vow is a reflection of one's character.  Mobile enthusiasts who equate breaking marriage vows with business success might as well invite business partners to betray them.

The panel closed out with their predictions for 2015.  They were all over the map expecting disruption in real estate, wearables, wealth management, and other sectors suffering from friction.  I agree with the trend of emoticons and short-form messages dominating communication in post-literate society.  Maybe the next hot mobile startup will have a hieroglyphics UI.

Mobile Monday's 2014 close-out left me satisfied that I know more about mobile use than most VCs and analysts.  I expect more of the same from the sector, particularly from the continued growth of games.  The mobile sector can expect to see more of me in 2015.
Created by Anthony Alfidi at 12/09/2014 09:00:00 PM