I had a fun day down in sunny Palo Alto today, coaching tech startups through their Cleantech Open pitches.  I learn as much from these sessions as the startups learn from me, if not more.  I am morally obliged to share my incredible genius with the masses.  This stuff is totally random and chaotic, just like running a startup.

The opening slide is the ideal time for the pitcher to state their name and title.  It's usually the founding CEO, and there needs to be a really good reason if it's someone else, like if the founding CEO is off pitching top-tier VCs at a major pitchfest and the COO has to give this other pitch to a second-tier angel club.  The intro of a long pitch is also a good time to reiterate the 30-second elevator pitch.  The elevator pitch ought to be on every employee's desk, repeated like a mantra whenever someone at the startup meets the general public.

Describing the team's composition is very important.  I am not swayed by headshots unless they depict really hot babes, with cleavage and pouty come-hither looks.  Okay, seriously, the team slide must describe what each team member brings to the game:  the scaling / serial entrepreneur, the scientific co-founder's patents, the super-salesperson who grew a product from zero revenue to eight figures or more annually.  Venture investors like visual stimulation and VCs in Silicon Valley are often focused on brand-name pedigrees.  VC partners with tech backgrounds have lots of Berkeley and Stanford degrees, and the ones with business domain experience have lots of Harvard and Wharton MBAs.  Logos for prominent schools and corporations are easy ways to make statements about the quality of the team's experience.

Never ignore Big Data as a cost center, revenue stream, and source of liability.  It's all the rage anyway and competently addressing its many facets shows maturity.  Big Data has storage costs in the cloud and they will grow with app downloads.  It can be a revenue source if its predictive analytics offer enterprise clients some ways to optimize whatever they do on their own.  The absence of privacy policies and other regulatory compliance standards opens the door to lawsuits.

Founders who are fully invested in their startups impress the heck out of sophisticated investors.  This is one bullet point that is best mentioned in passing while briefing the team slide.  It shows do-or-die commitment.  Some VC is eventually going to ask about it. 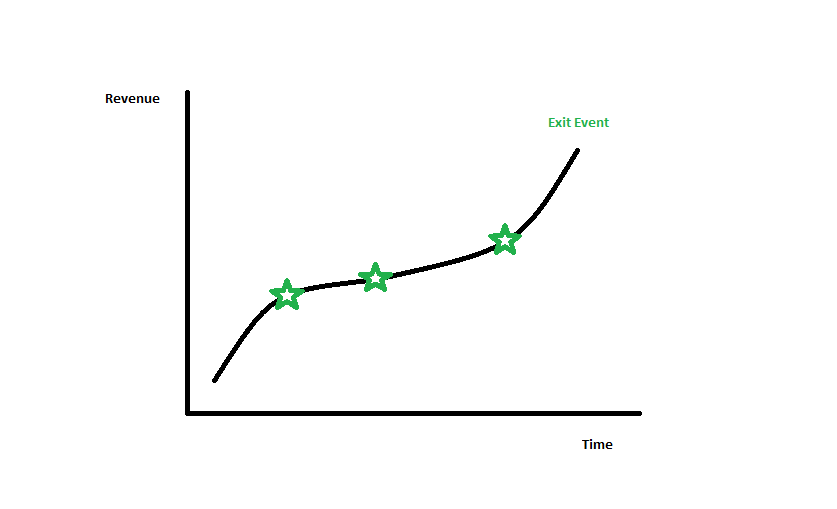 Look at my wonderful picture just above.  I drew this simple milestone slide as a sample of how startups can portray their growth expectations.  I believe it links projected revenue over time to product achievements and capital raising needs.  It also displays some kind of exit event.  Later investors want to know what the founders plan to do once the startup is successful.  The startup's strategies for finance, marketing, and capital raising are adjacent lanes on a highway, and the startup will change lanes at high speed.  Pushing back a milestone in one lane also pushes the others back the same distance.  Just link them all.  Each inflection point on the S-curve to adoption is theoretically driven by some success that justifies more capital.

I will never understand why some founders want their pitch decks to look like works of abstract art.  Diagrams showing lots of internal references between business units invite confusion.  Successful enterprises have an external orientation facing customers and results, not internal orientations facing their own processes.

The "secret sauce" of some magic technology means nothing if it does not generate a product with better / faster / cheaper characteristics.  Patents are nice but the consensus I've seen from VCs is that IP protection is worthless for a company that can't sell a viable product.  Stating price points and market positioning helps investors understand whether some startup can truly reach its target market.

The overused term "partnering" begs questions about what these partners bring to the table.  I want founders to tell me which of those corporate logos are in the supply chain because they're affordable, which are effective distribution channels, and which of the non-profits are helping ease the regulatory burden.  If they're just on the slide because someone in their purchasing department thought the startup had a neat idea, well, then they're not really a partner.

Everyone makes mistakes.  Founders should tell me how great they are at problem-solving and not belabor their mistakes.  My biggest mistake was attaining a degree from the University of Notre Dame that later proved worthless.  I recovered from that error by cutting off all contact with Notre Dame snobs who want me to fail.  Founders are free to describe how they triumphed over adversity, just like any good college football team that defeats the Fighting Irish.

Someone who is very proficient in the English language must proofread the pitch slides before the founding CEO makes them public.  This is more than just slapping in a Safe Harbor statement now that the JOBS Act puts pitches to non-accredited audiences (including those on crowdfunding portals) under SEC scrutiny.  Fix the typos and make the fonts readable.

Venture capitalists are renowned for their pattern recognition abilities.  They compare unknown enterprises to known business models.  Self-identifying as the "Uber of something" makes sense if they deploy a free app that programs an affordable service.  Self-identifying as the "eBay / PayPal of something" makes sense if they control an online marketplace that reduces several friction sources.  Cleantech startups have existing markets as reference points.  Renewable energy feed-in tariffs, solar  panel rebates, biofuel RINs, and carbon credits are all valid aids in pattern recognition.  Use them wisely if they resemble something brand new.

I told you this stuff is random.  Alfidi Capital is your source for truth.  Entrepreneurs are responsible for figuring out how to display their own genius in Guy Kawasaki's 10-20-30 structure or whatever format they must send to some pitchfest.  I'm outta here.  See you all tomorrow, or whenever.
Created by Anthony Alfidi at 9/11/2014 11:05:00 PM