I never saw the San Francisco Giants or San Francisco 49ers play at Candlestick Park.  I was always too busy with my professional life to make time for a game.  The pending end of Candlestick Park's useful lifetime prompted me to find some way to see the venue before it is gone.  Fortunately, there was one way remaining. 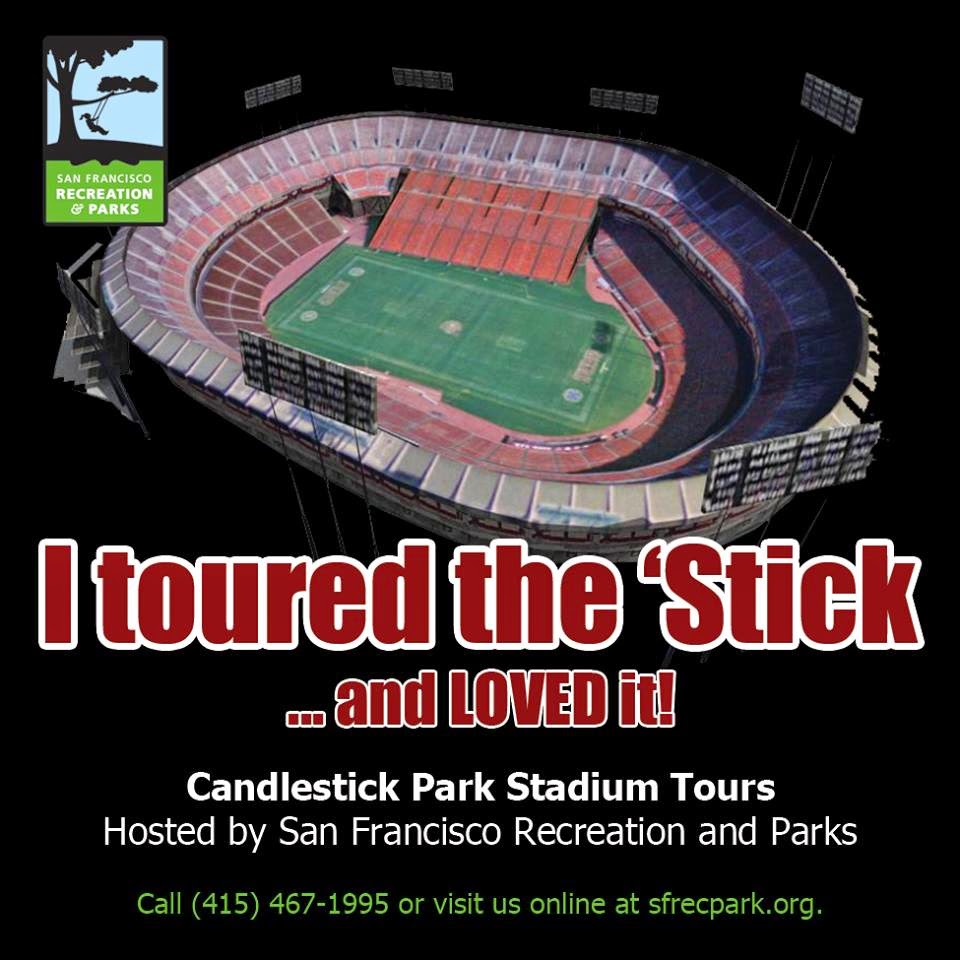 The San Francisco Recreation and Park Department had a plan thanks to Amanda Tugwell.  She conceived and managed a public tour program that allowed people to see the Stick one more time while its operations wind down.  I secured a spot for myself on today's 9:30AM tour, with a discounted ticket price of $15 thanks to my veteran status.  Being a veteran has its perks, including a savings of three bucks off this ticket price. 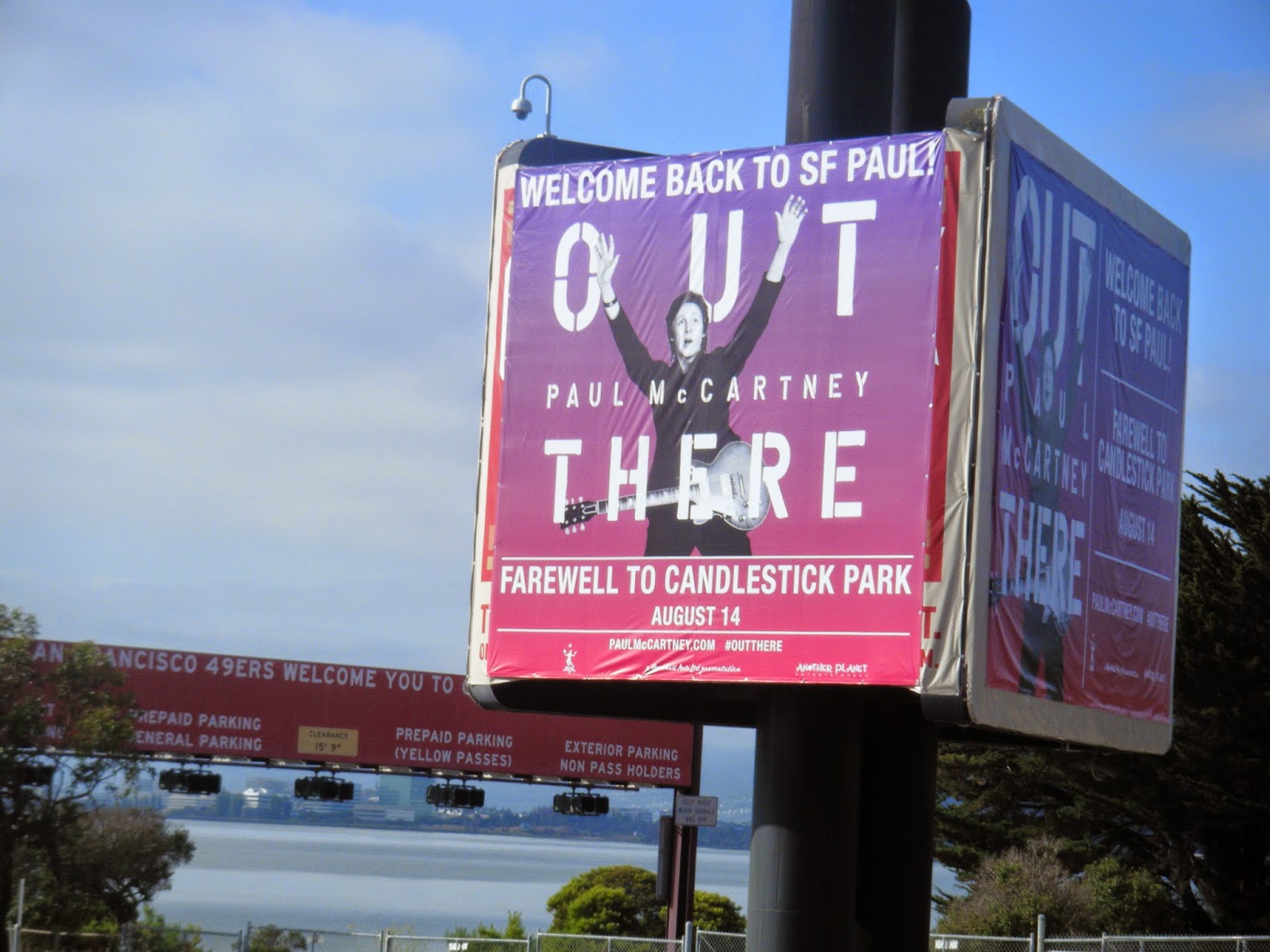 I did not attend the Paul McCartney "Out There" concert that closed out the park's official schedule.  Friends said it was a cool show but I wasn't about to pay through the nose and fight traffic to see Sir Paul.  I'm sure the guy can sing quite well.  I would have been tempted to pay if Van Halen had played instead. 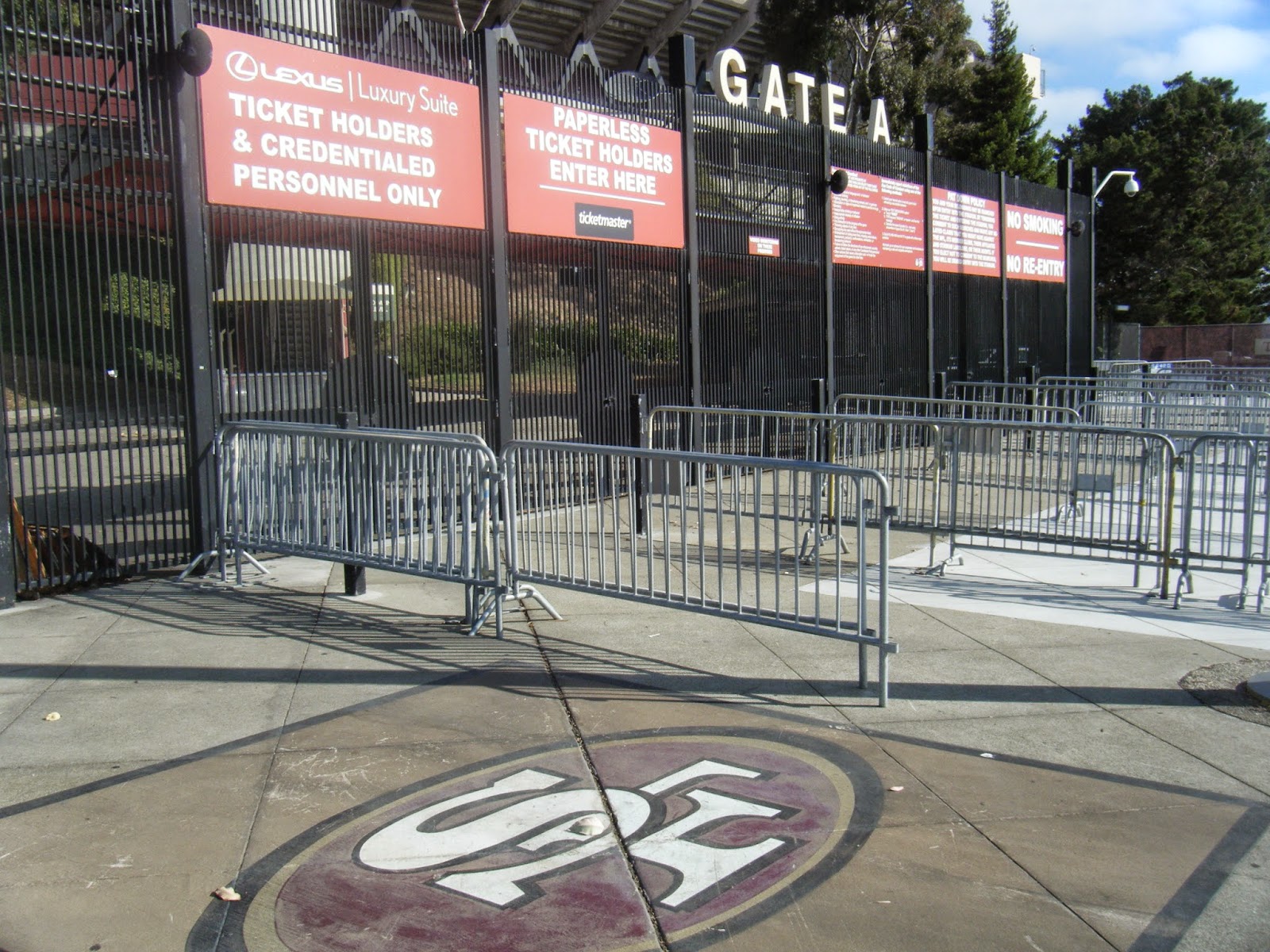 Amanda served as our tour guide and took us through the stadium, pointing out its notable features.  The statue of St. Francis of Assisi outside Gate A is supposed to be moved to Golden Gate Park at some point, and the "founders' bench" honoring the 49ers' first owners is supposed to move to Levi's Stadium in Santa Clara.  Once inside the gate we checked out the SFPD's two-room jail cell for fans who get too rowdy.  I'd sure like to throw some people I know in there. 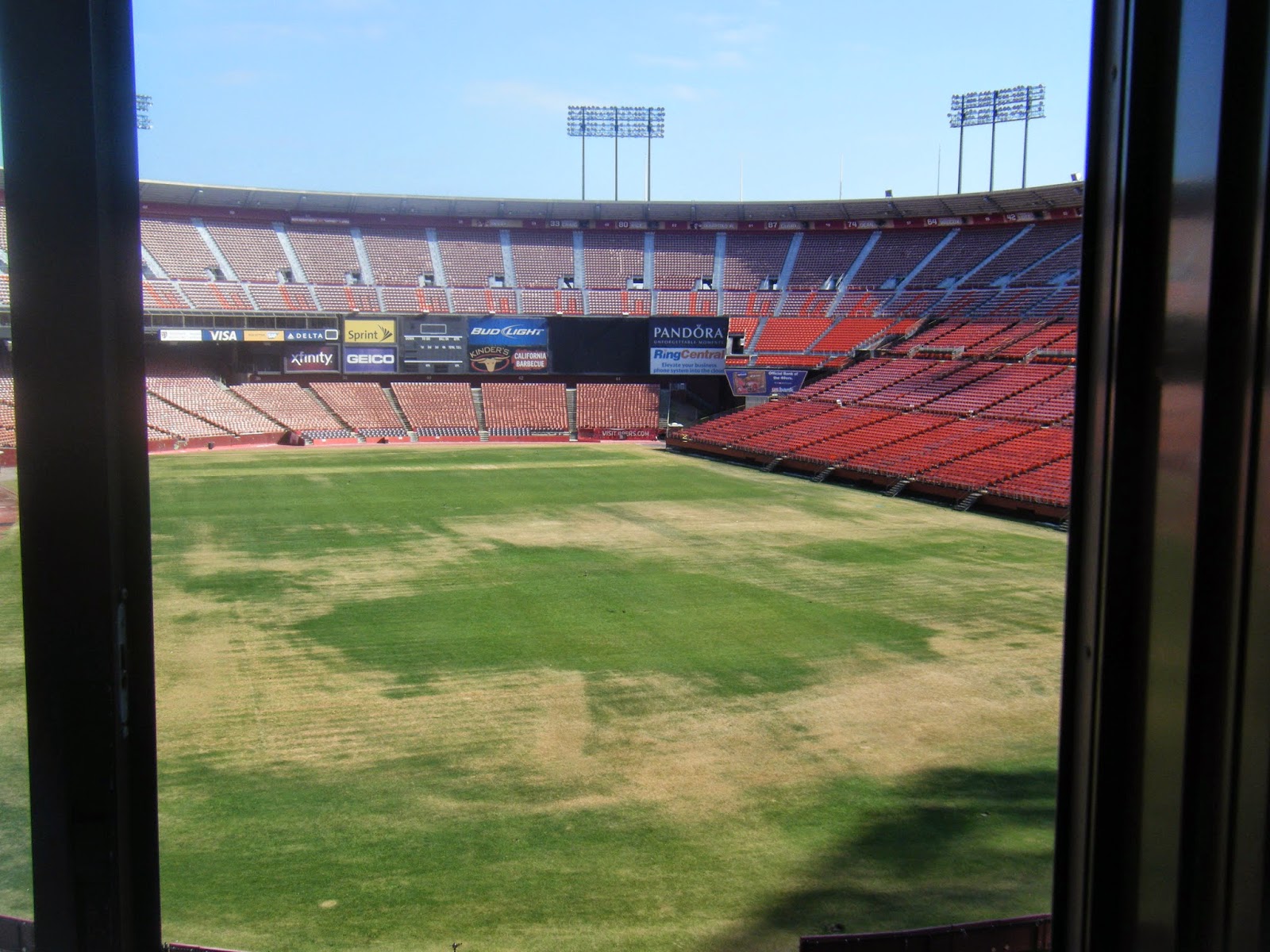 We spent some time in the press box while some folks in our group told stories of their favorite games.  One common memory was the Loma Prieta earthquake in 1989.  The fans kept chanting for the game to go on, unaware that parts of The City and the Stick were severely damaged.  I was a high school student in Sacramento at the time, plotting my eventual escape to San Francisco. 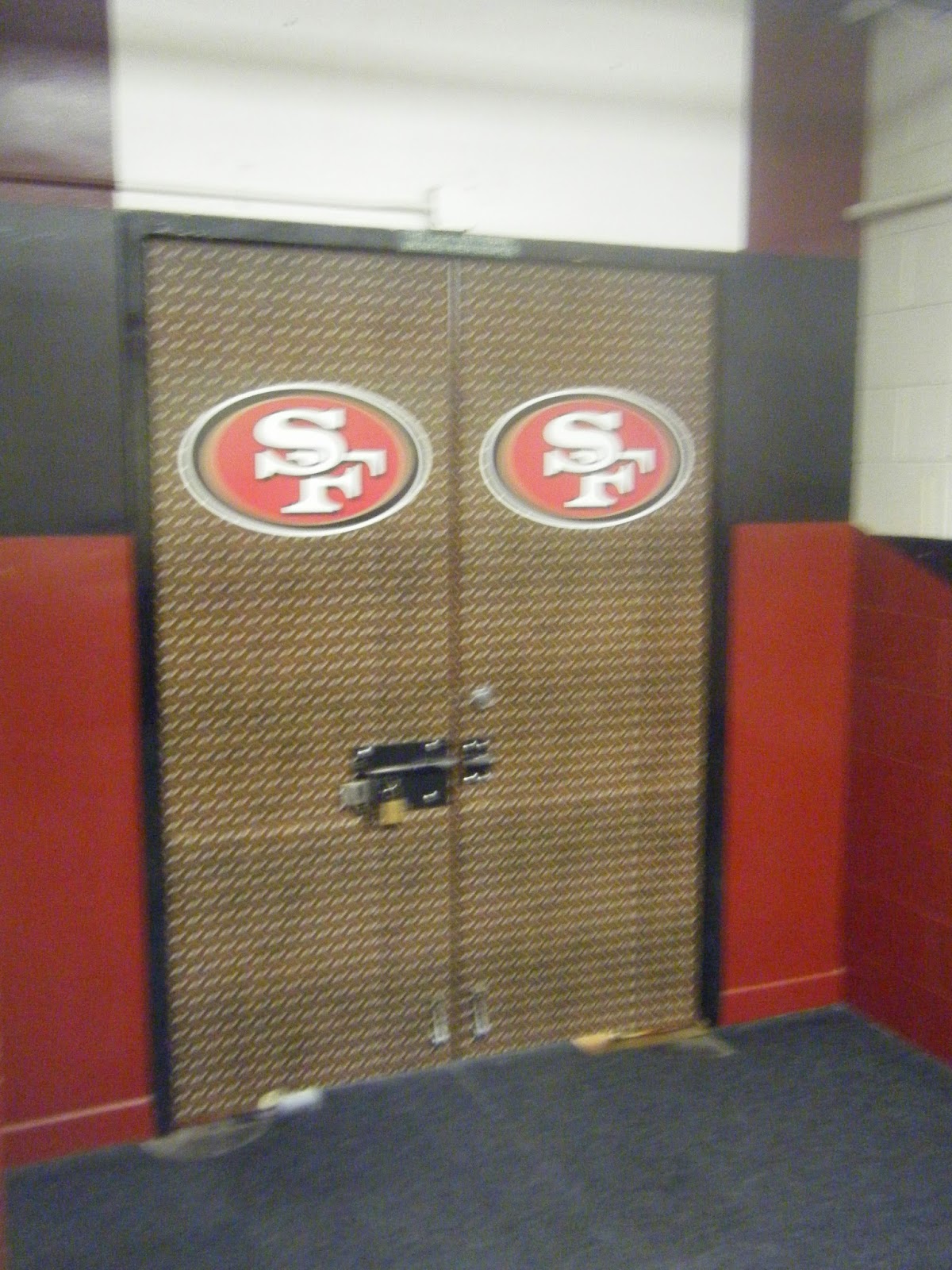 The door to the SF 49ers locker room was immediately across from the visitors' locker room.  The trash talk must have been thick in the air if the two teams ever crossed paths.  I asked Amanda where the cheerleaders' locker room was located; it was upstairs somewhere and we would not get to see it.  Darn.  I was looking forward to seeing where the gals undressed and showered.  I'm pretty sure I'd have no difficulty getting an NFL cheerleader to date me, thanks to my extreme manliness.  My schedule is quite full so the ladies will have to get in line. 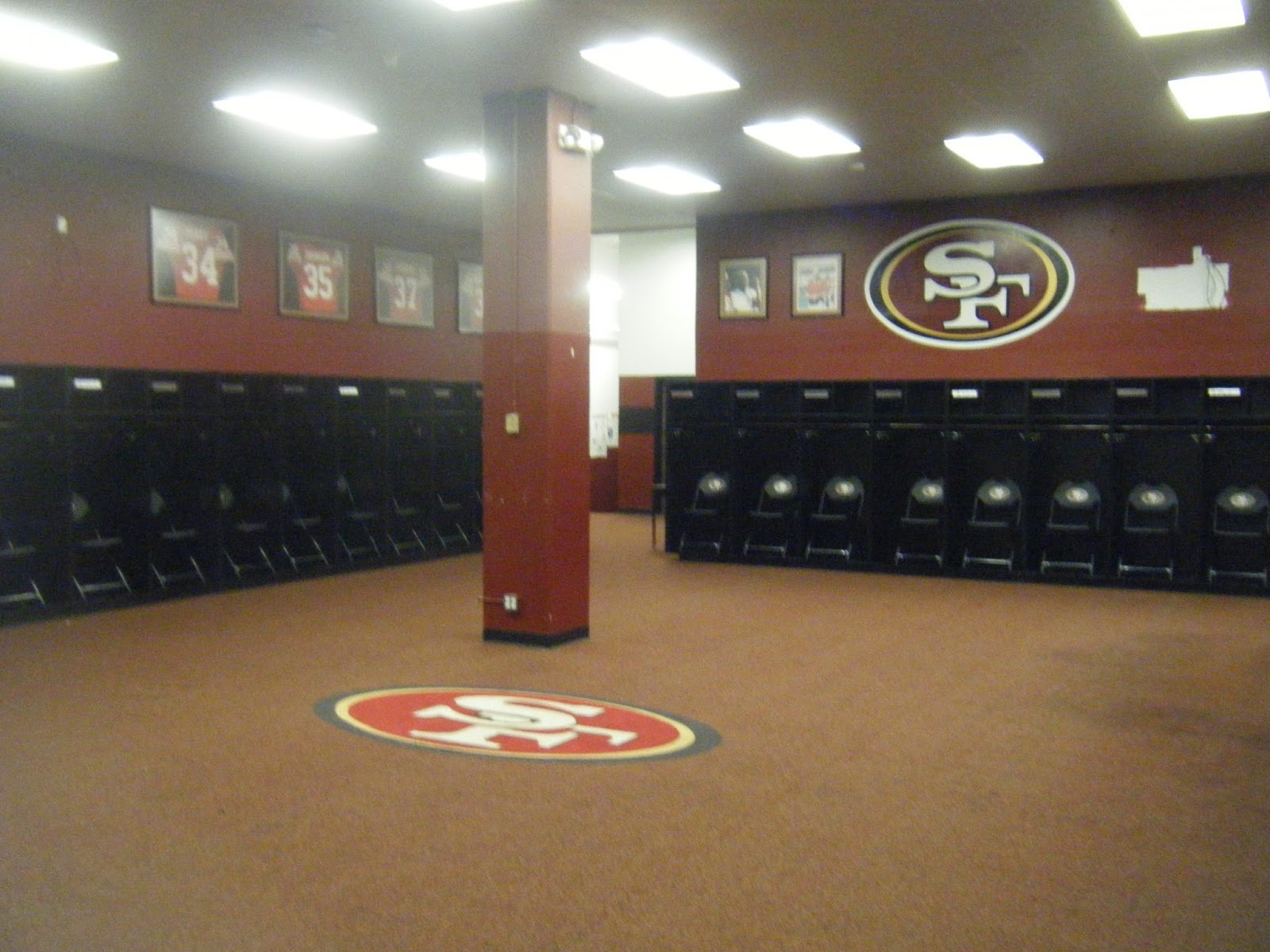 The 49ers locker room was exactly like what you'd expect from watching NFL games on TV.  No one is supposed to walk on the big team logo on the floor out of respect for tradition.  I played by that rule today. 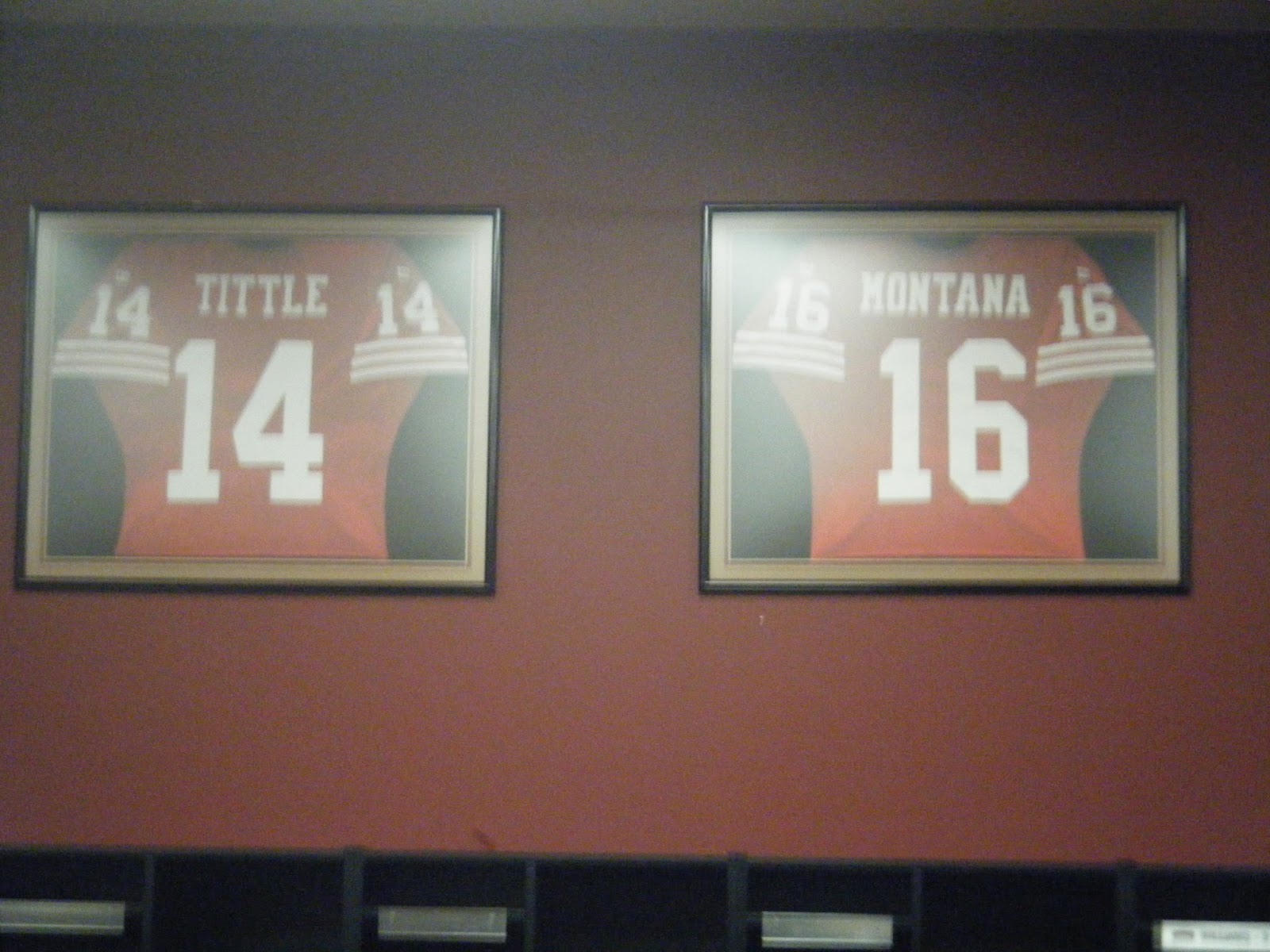 The jerseys of famous former players hang high on the walls.  I'll bet more than a few of the multimillionaires on pro sports teams are banging each others' wives and girlfriends non-stop.  Rich people tend to do that when they're bored. 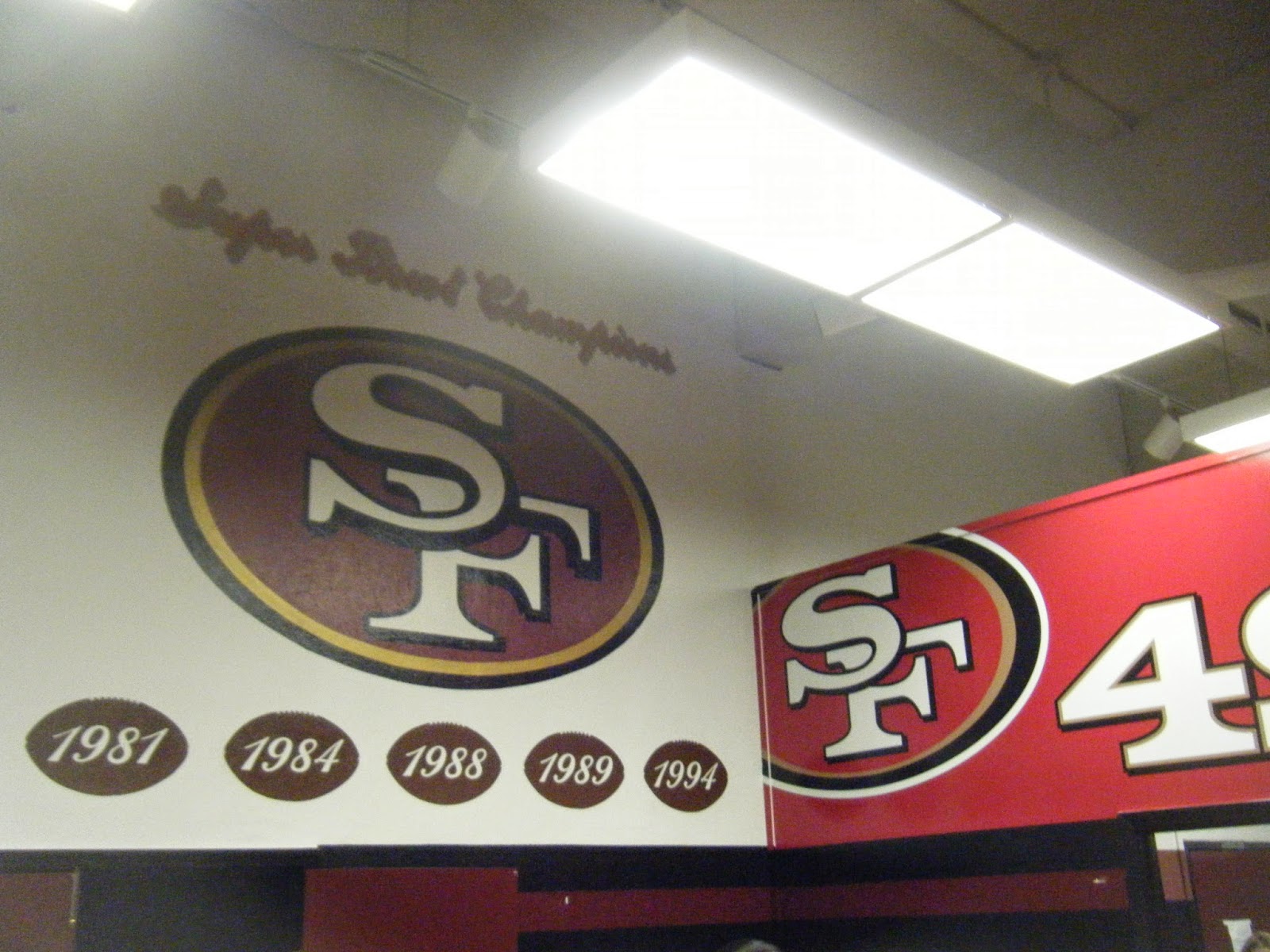 Amanda took us to another locker area that used to be the 49ers lockers when they shared the stadium with the Giants.  I stood where Steve Young's locker used to be situated.  The room later became the coaches' and trainers' area when the 49ers took over as sole tenant. 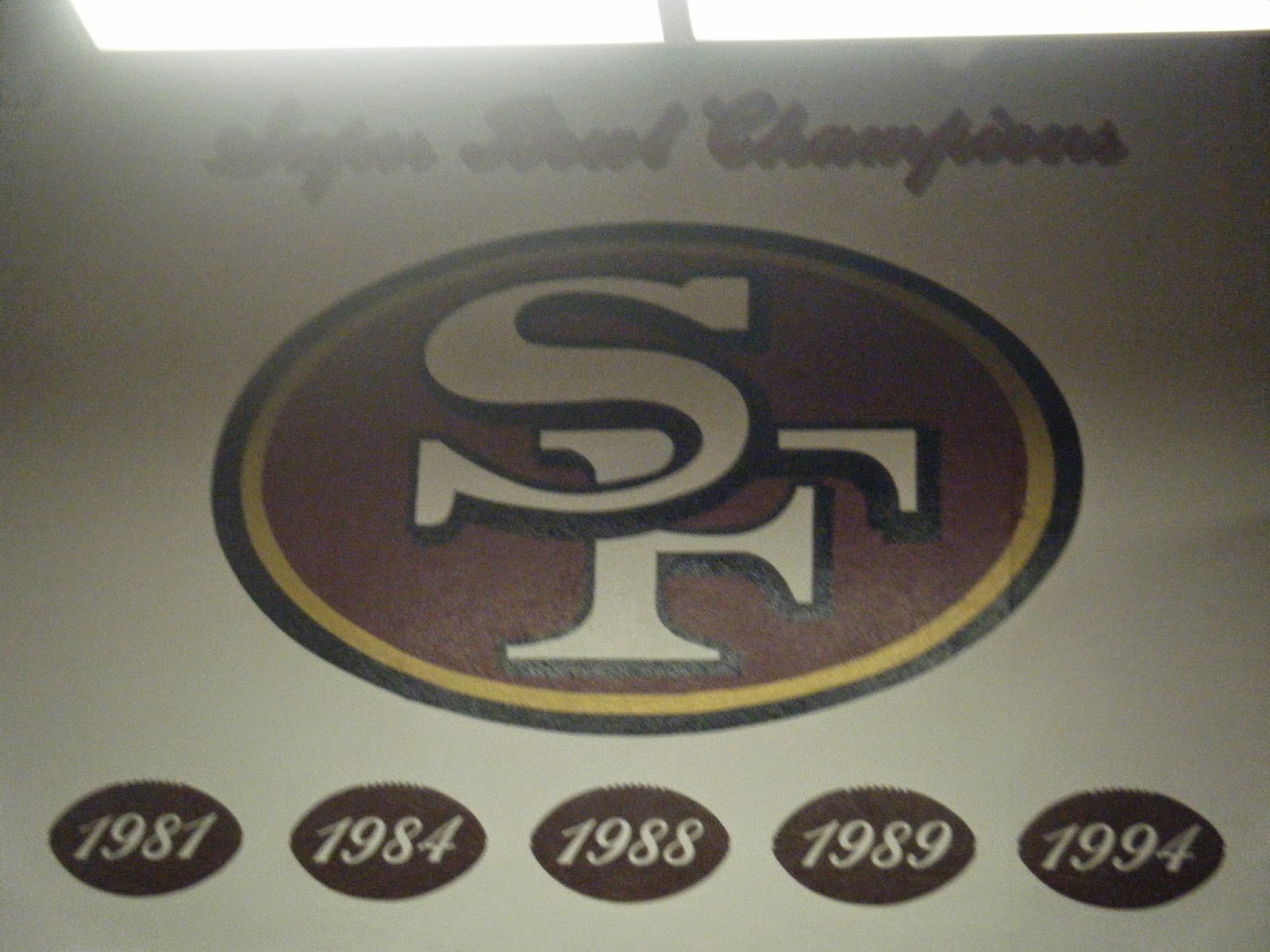 Amanda noted that the 49ers won all of those championships on the wall without the modern demands that wealthy athletes make upon their ball teams.  The ultra-modern Levi's Stadium has everything the players and rich patrons want.  We shall see whether it produces a comparable string of Super Bowl victories. 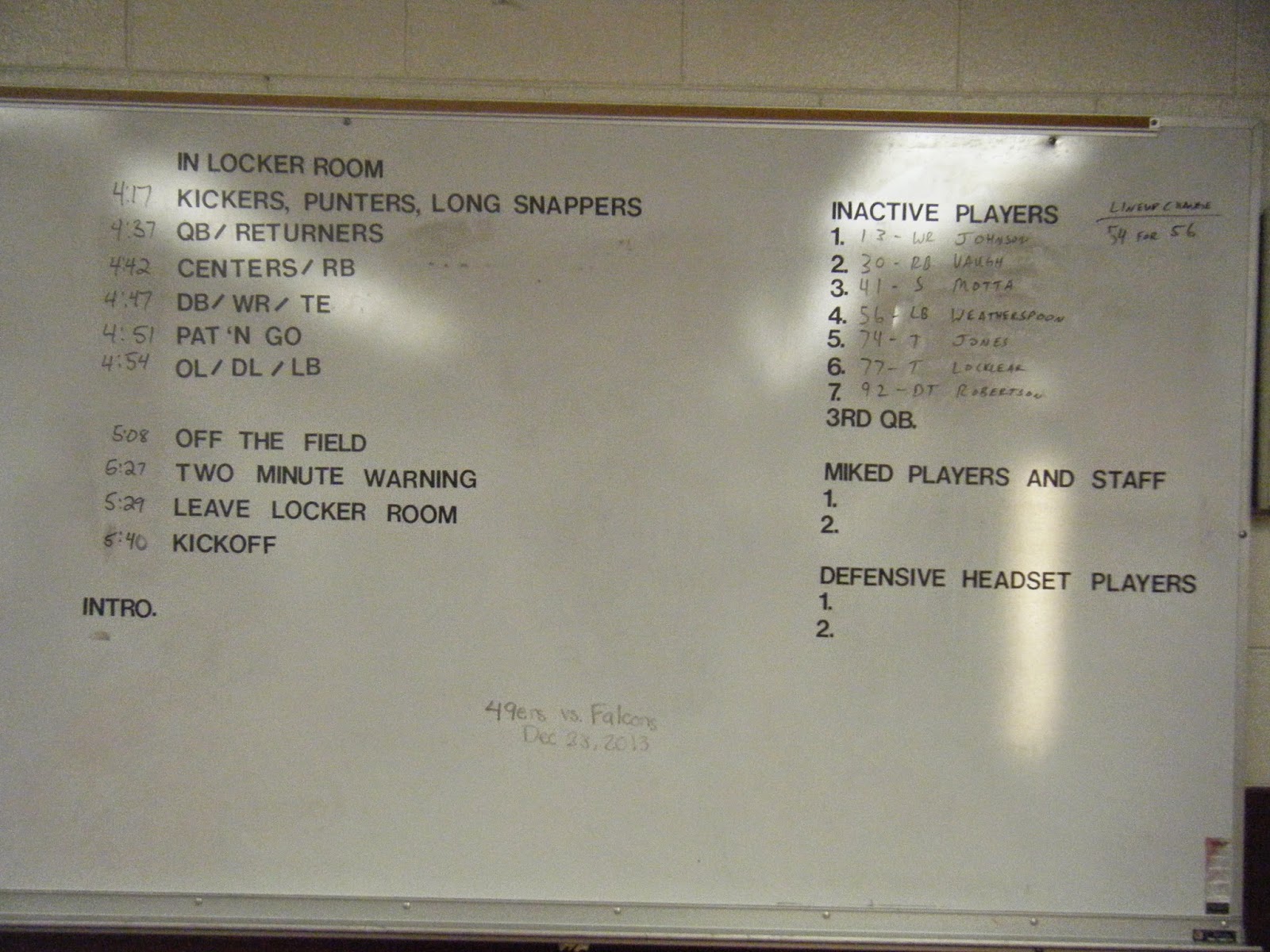 The final whiteboard lineup represents whatever the coaches were planning for the 49ers' final home game at Candlestick Park in 2013.  I have no idea what this stuff means but I captured it for posterity.  The tunnel leading out to the field used to have a Bill Walsh plaque that players would touch for good luck, much like the "Play Like a Champion Today" sign at the University of Notre Dame's stadium.  I never touched that sign when I was a Notre Dame undergrad and I never miss a chance to denigrate that school.  I do not like my alma mater at all.  I'm pretty sure the 49ers could beat the daylights out of the Fighting Irish any time they want.  Unknown vandals purloined the Bill Walsh plaque before it could be moved to Levi's Stadium.  If anyone knows who pulled that shameful stunt, they should contact SF Rec and Park and the 49ers to rectify the situation. 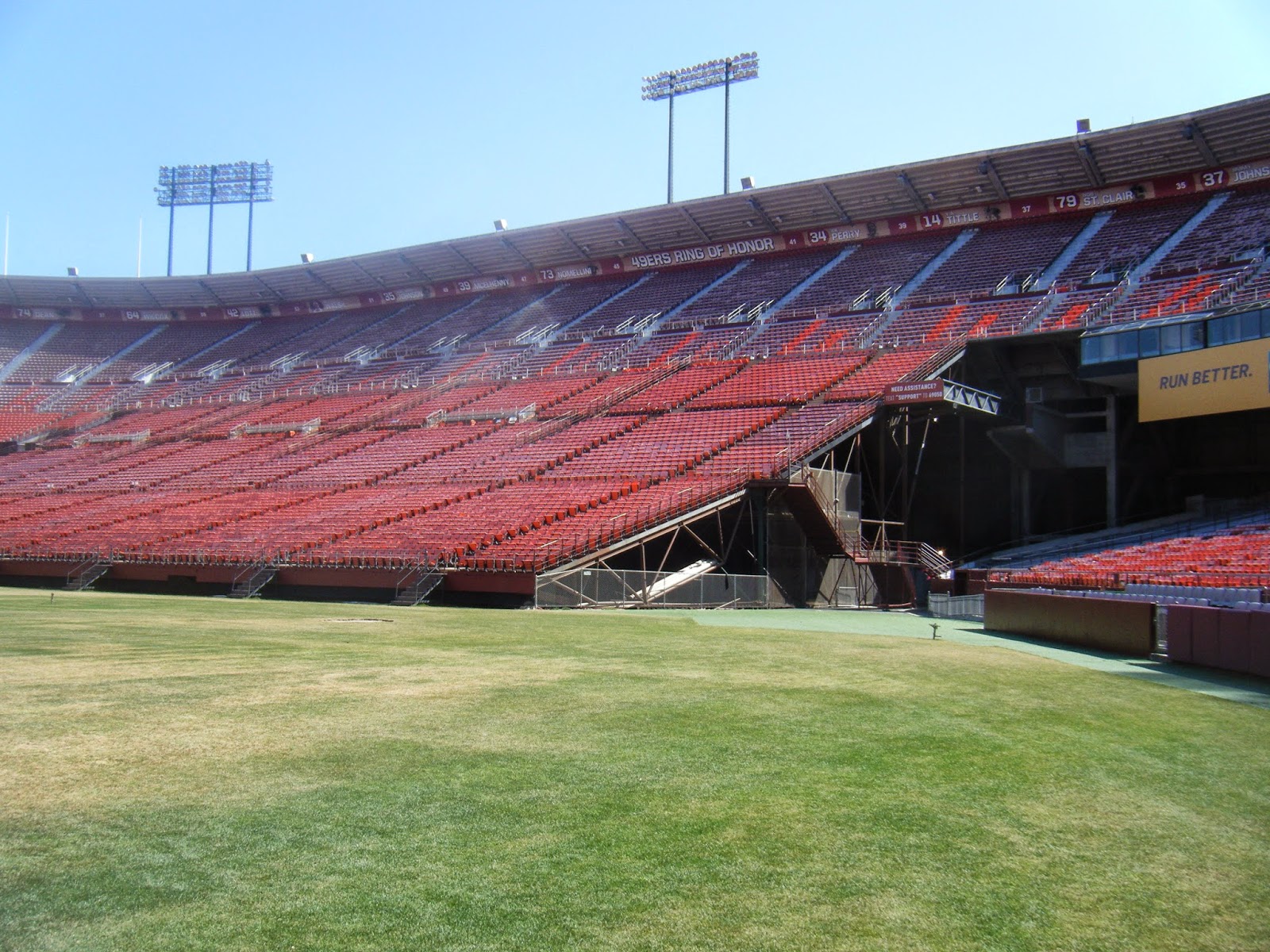 We got on the field and I asked Amanda to throw me one of the footballs she brought.  I fumbled the catch.  I threw it back to her and missed by at least one body length.  I can at least say I threw a football around on an NFL field for one day.  The goal posts were already down so attempting a field goal was not meant to be.  I never had the skills for team sports, so finance is definitely the better career for me. 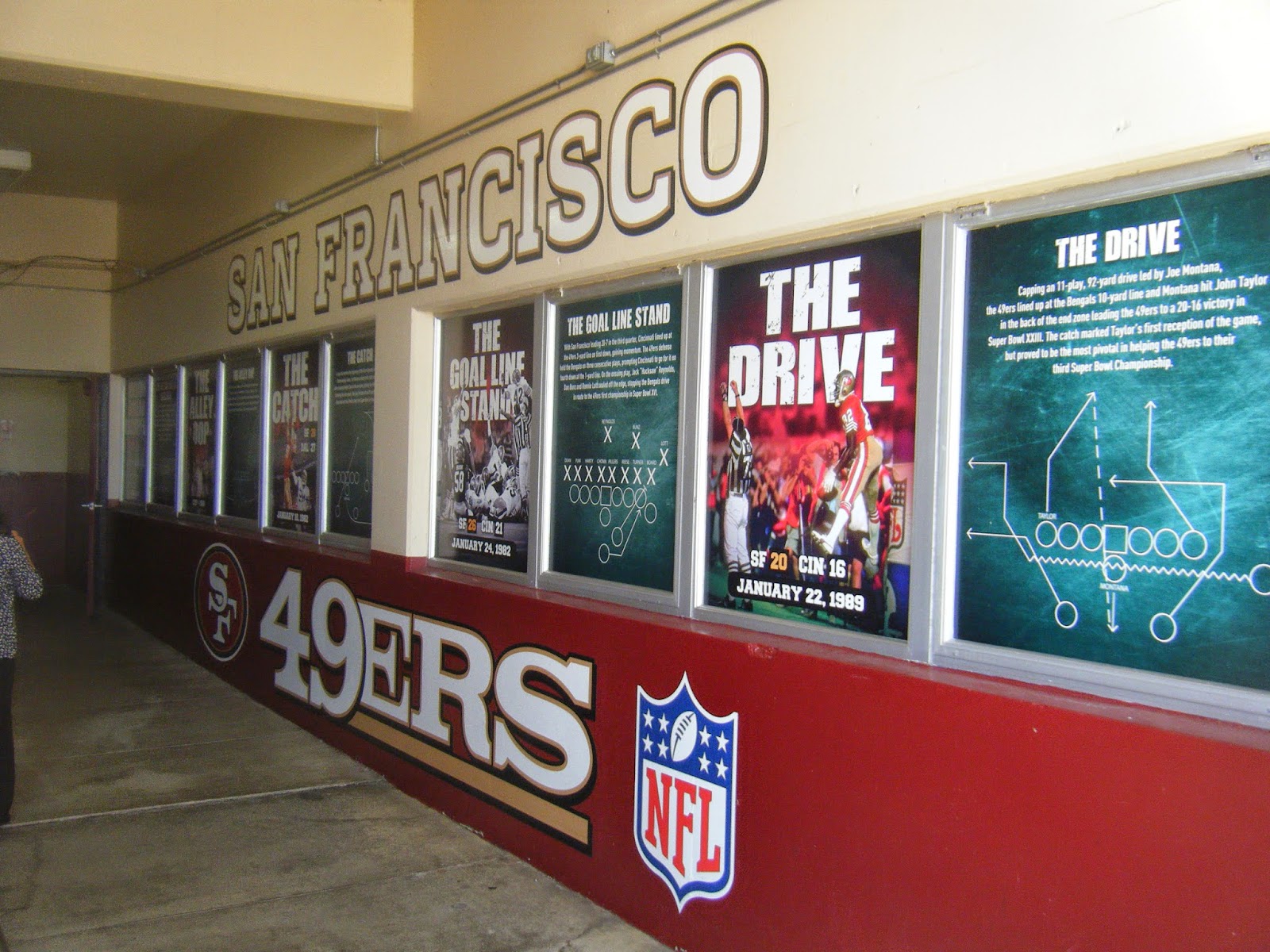 We ended our tour in the players' former parking lot, where posters recount the 49ers' most memorable plays.  I remember watching "The Catch" on live TV as a kid.  My fascination with San Francisco probably started at right about that time.  I thanked Amanda for the great job she did as our tour guide.  Her innovative tour concept made money for The City.  Any sports organization should be glad to have her on board. 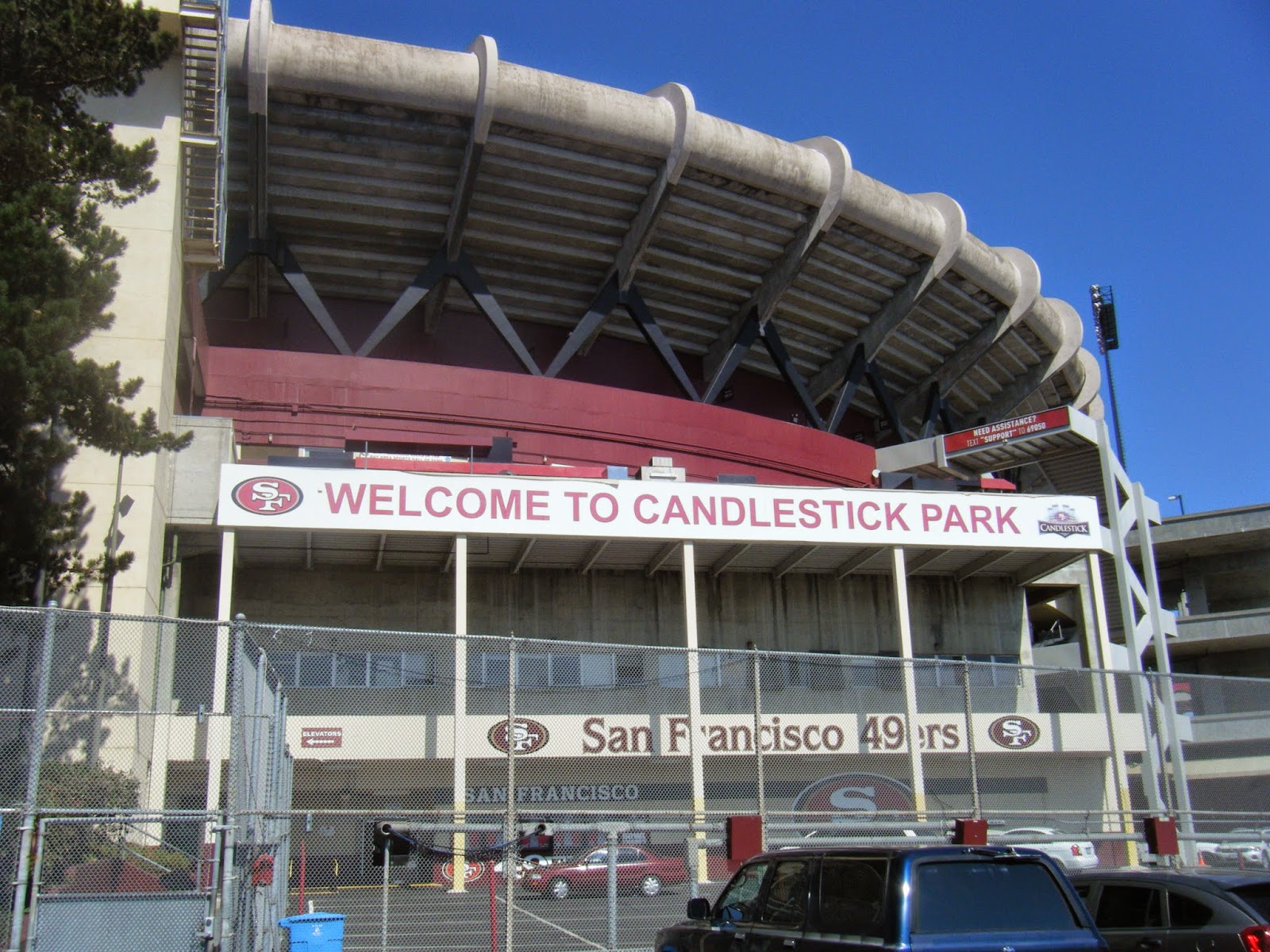 I did not wax nostalgic for Candlestick Park because this tour was my only experience inside the stadium.  Plenty of San Franciscans must have indelible memories of the Stick.  Families remember the fun times they had in the stands, cheering for their favorite team.  Wealthy people in the luxury suites remember the ostentatious displays of privilege that impressed their business partners and closed deals.  Players and coaches remember their bowl ring victories, shocking defeats, colossal paychecks, and the fun times on the road banging nameless chicks.  The San Francisco 49ers have moved to Silicon Valley, and hopefully they'll change their name to reflect their new neighborhood.  I'm not glad to see them go, but I am glad I got to see their old home at Candlestick Park.
Created by Anthony Alfidi at 8/26/2014 04:07:00 PM